A Look At Europe’s New Right 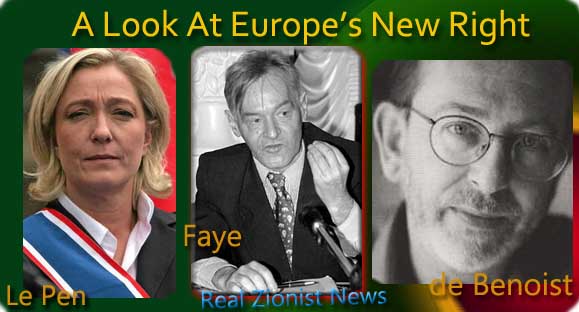 A LOOK AT
EUROPE’S NEW RIGHT 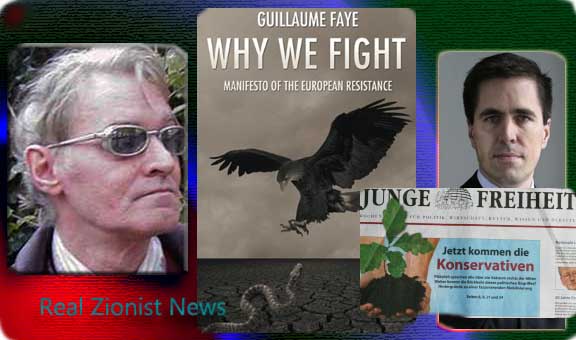 “Belonging To A People Makes A Man Human,” writes Guillaume Faye in his best selling book, “Why We Fight.”


Faye has emerged as the leading voice of Europe’s ‘New Right’ (Nouvelle Droite) as he departs further afield from his mentor Alain de Benoist as well as from Dieter Stein, publisher of Junge Freiheit (Young Freedom).

Guillame Faye’s Why We Fight indeed moves beyond the theories of de Benoist’s ground breaking year-2000 Manifesto For The New Right. For while Faye gives credit to his mentor’s philosophy his main concern is with on-the-ground strategic activism in finding a solution to Europe’s multiracial immigration problem. 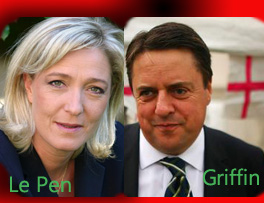 Faye’s geopolitical outlook in some ways mirrors the “Eurasianist” idea advanced by Russian nationalist Alexander Dugin and the anti-Immigrationists of the “Euronationalists” such as Front National’s Marine Le Pen and British National Party’s Nick Griffin.

This puts the “ethno-visionary” Faye at odds with de Benoist who seeks an alliance between Europe and the Islamic Third World in opposing Zionism and Americanism. Faye has also debated against his former guide’s claim that immigration is an incontestable facet of European existence and can only be dealt with as such:

“The right to be different in de Benoist’s strategy in reality is reserved for everyone but Europeans who in the name of multiculturalism are summoned to discard their own biological and cultural identity.

For in the Europe it envisages, communities of foreigners, particularly Muslim ones, will, for obvious demographic reasons, play an ever-greater role in our lives. This affront to our identity is accompanied by sophistic arguments that ridicule the ‘fantasy’ of a possible White reconquista. In this spirit, we are told that we will have to make do with a multiracial Europe.

But I, for one, refuse to make do. Nor am I prepared to retreat before an alleged historical determinism which aims at making Europe a Third World colony.” View Entire Debate Here.

Although Faye does view America (which he calls “the monstrous offshoot of Judaism”) as an “adversary,” he identifies the “real enemy” threatening the European White Homeland as Islamic Third World immigration.

And while acknowledging that the Judeo liberal class has been the chief proponent of Third World immigration and the demonizing of European White culture, he sees European Jewry as nothing more (albeit serious) than a “corrupting” and “intimidating” force.

“An enemy,” Faye contends, “does more than corrupt and intimidate, it threatens one’s biological existence. Our life and death struggle is with an inassimilable Islam, growing in numbers throughout the continent.” View Entire Story Here, Here & Here. 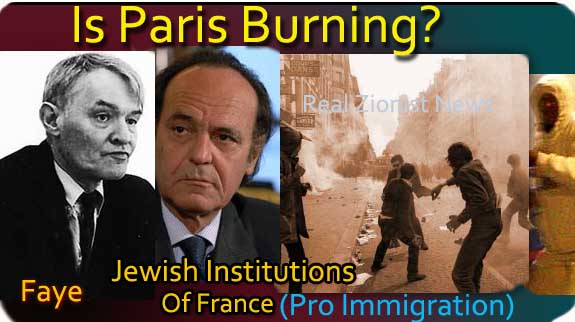 “EUROPE’S PLIGHT IS PROVOKING A WORLD CATASTROPHE,” warns Guillaume Faye in a recent interview with the Occidental Observer.

In his latest book, Avant-Guerre (Before the War), Faye develops his thesis of “the colonization of Europe” while going beyond the New Right context by predicting “a terrifying crisis.”

A coming crisis, (surprisingly), he actually welcomes—”a third world war”—which he believes will be the means to awaken Europeans to their need for a homogeneous White society.

In a concurrent interview with the Flemish magazine Menzo, Faye brings up the riots that lasted for twenty-one days in November 2005. He views the anarchy that ensued as a prelude to a coming catastrophe:

“The riots were an ethnic revolt and not what the liberal class made of it, a ’socio-economic’ backlash. Because of unbridled immigration of sub-Saharan Africans, we have massive numbers of foreigners with hidden arsenals whose culture is totally different from ours.”

In sub-Saharan countries, social structures that we take for granted are non-existent. Mothers have children with different fathers and children are raised by the village. When such structures are exported it inevitably causes problems.

Paris is not a village and the rearing of children is not its responsibility. The offspring of these Africans frequently turn to crime. They don’t know who their father is and no one takes responsibility for them. Their presence here is like a time bomb.” View Entire Story Here & Here.

And this “time bomb,” (so Guillaume Faye warns of and even welcomes), as he views the storm clouds on the horizon, will soon, (he predicts), usher in world-altering tempests descending on the White race—determining once and for all—if it is to have a future or not.

And: Judeo Masonry & The Ruin Of Europe Click Here