The New Merchants Of Death - McChrystal And Petraeus 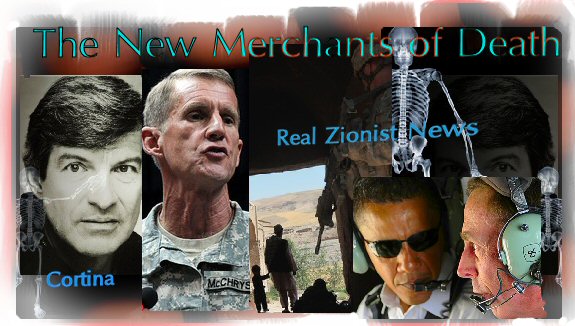 Brother Nathanael Kapner: Why do you think McChrystal was fired?

Joe Cortina: McChrystal was becoming a liability to the Obama regime and there was too much friction between them. You have to know some details of McChrystal’s background and personality to fully understand.

Br Nathanael: What about his background and personality?

Joe Cortina: McChrystal was a West Pointer in 1972 when West Point was known as: “The Prison on the Hudson.” During McChrystal’s time there, West Point was a potent mix of testosterone, hooliganism, and reactionary patriotism.

Cadets repeatedly trashed the mess hall in food fights and birthdays were celebrated with a tradition called rat “f*****g” which often left the birthday boy outside in the snow or mud, covered in shaving cream. It was pretty out of control. McChrystal was part of all this.

Br Nathanael: He was part of all this? How so?

Joe Cortina: McChrystal’s conduct was deplorable - more like a juvenile delinquent than a West Point soldier.

He accumulated more than 100 hours of demerits for drinking, partying and insubordination – a record that his classmates boasted made him a “century man.”

One classmate recalls finding McChrystal passed out in the shower after downing a case of beer he had hidden under the sink. The troublemaking almost got him kicked out. This is the kind of man who has been leading our troops in Afghanistan for the last year. Although we shouldn’t be there in the first place, it’s no wonder that we are losing this war.

But really, it’s not a question of winning or losing. It’s a question of good and evil. And this war is evil from the beginning to whenever it’s going to end.

Br Nathanael: How did he place as a student - was he considered bright?

Br Nathanael: What do we know about his personal code - partisanship - who he associates with politically?

Joe Cortina: McChrystal was and is a hard core liberal Democrat. He even voted for Obama which is a sure sign that the man has poor judgment and should NOT be in charge of our troops in any scenario.

Later on he found a strong supporter in Hillary Clinton - who backed up his conduct 100%. He is heavily involved with the Council on Foreign Relations - and as an educated man - he knows EXACTLY what the CFR is: A Jew-intensive Zionist front group. View Jewish Member List Here.

Br Nathanael: Can you give us an example of McChrystal’s unethical conduct?

Joe Cortina: Of course. This past February, a Special Forces night raid ended in the deaths of two pregnant Afghan women and shot up a bus, killing five Afghans. “We’ve shot an amazing number of people, but to my knowledge, none has ever proven to be a threat,” McChrystal remarked.

This man has now gained a reputation for civilian murders unparalleled in modern war chronicles. The “AMAZING” number of people that McChrystal brags about being shot were mostly civilians and children, as he even heartlessly admitted.

He is a Godless man, a cold blooded murderer, who spearheaded the Joint Special Operations Command which writer Seymour Hersh identified as an executive assassination wing of the White house — a death squad. View McChrystal’s Civilian Atrocities List Here.

Br Nathanael: What else indicates that McChrystal is less than a decent honest leader?

Joe Cortina: The list is endless. When Defense Secretary Donald Rumsfeld made his infamous “stuff happens” remark during the looting of Baghdad, McChrystal backed him up.

Can you imagine? A field commander supporting the putrid comment of another war criminal - that pillaging another nation’s historic irreplaceable national treasures — the destruction of an ancient civilization — was no big deal?

Joe Cortina: Indeed he was. In 2006, McChrystal was tainted by a scandal involving detainee abuse and torture at Iraqi Camp Nama, short for “Nasty-Ass Military Area.”

Prisoners at the camp were subjected to a now-familiar litany of abuse: Stress positions, being dragged naked through the mud. McChrystal was not disciplined in the scandal, even though an interrogator at the camp reported seeing him inspect the prison multiple times.

Red Cross officials were refused entrance where these tortures were routinely reported. There is simply not enough room to adequately chronicle all of McWARMONGER’s war crimes and daily abuses of humanity.

Half the world now hates us as barbaric soulless animals - and with damn good reason. Monsters like McChrystal have overseen acts of brutality against helpless children of detainees (civilian parents) and had these innocents raped and sodomized in front of their parents as a means of obtaining information.

And people wonder why I get REALLY PISSED when I see some scumbag moron with a “SUPPORT OUR TROOPS” sticker on his car.

Joe Cortina: General ‘Betray-us’ is just another cold-blooded killer and concerned only with his own career and power base.

I did an Open Letter to War Criminal David Betrayus last year exposing his self-serving motives. He is as vile and Godless as McChrystal - just not as crude.

His true nature was best described by former Cent-Com Chief Admiral Fallon when he told our drunkard coward-in-chief Bush to stuff it when asked to attack Iran in yet another insane serial war for the Jews.

Fallon described Petraeus as: “That little ass-kissing, chicken-shit sycophant.” Of course, the Jews who run our military policy got Fallon fired for this.

In fact, the Jew-neocon warmongers, Fred and Kimberly Kagan, are now applauding the “chicken-shit sycophant” Petraeus, exclaiming, “He will win the war!” In other words, more Gentile boys will die for the Jews whose children don’t fight in these wars.

Br Nathanael: With the ascendancy of Petraeus, what’s the future for US war policy?

Joe Cortina: Petraeus is just another murderous psychopath who belongs in a high security prison and not being in command of US and NATO forces. He will thus virtually be dictating the course of world events.

This insane madness will continue until we wake up one day in a nuclear graveyard - or we wake up EARLIER - and DEMAND that the destruction, murder, and unconscionable evil we have committed ALL in the name of Israel - ALL FOR THE JEWS – stop INSTANTLY.

We don’t have an ‘ARMY’ any more. It has been perverted into the world’s largest institutionalized terrorist organization - whose unspeakable actions have not only NOT secured ANY American safety - but has been the biggest threat to world peace since the Cold-War detente period with the Soviets.

We must decide whether we are willing to bleed every last drop of American blood on the altar of IsraHELL to appease Satan - or to once again secure the blessings of liberty, freedom, and our true Christian heritage as we had before becoming occupied by the Jews.

One is light, love, and liberty in Christ. The other is darkness, death, and damnation under the Jews and their coming Anti-Christ — foreshadowed by the new merchants of death, McChrystal and Petraeus…

And: Jews, Generals, & The US War Machine Click Here