US Military Trains To Clear ‘Civilian’ Homes (Kill All Inside) 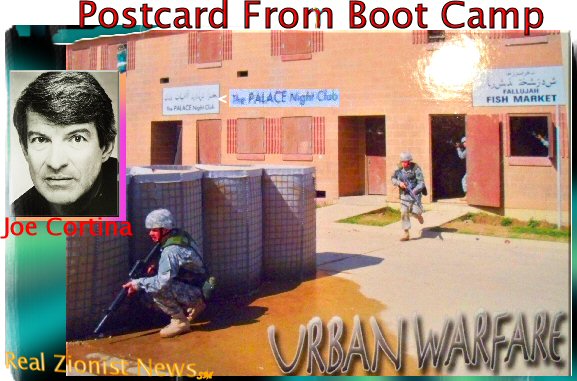 (KILL ALL INSIDE)
INTERVIEW WITH JOE CORTINA - EX GREEN BERET

Brother Nathanael Kapner: What was your military background?

Joe Cortina: I was initially attached to the XVIII Airborne Corps at Fort Bragg, NC, with the Strategic Army Command (STRAC) as an artillery officer. The time frame of my military leadership began in 1960 during the Vietnam war and the outset of the Berlin crisis.

I later was assigned to the USATC as a training instructor at hand grenade and machine gun ranges, infiltrating courses, bayonet training, and many other traditional basic soldiering drills. Subsequently, I was made a USATC Basic Training company commander.

Joe Cortina: Absolutely not. Every trainee understood that the murdering of innocent defenseless civilians was one of the most loathsome acts imaginable and attributable only to Godless barbarian animals.

I trained soldiers to DEFEND our nation against aggressors – not to murder innocent civilians and created-enemies by another foreign power like the illegitimate State of Israel that brought us into the immoral war and slaughter of the Iraqi people.

Joe Cortina: No. Urban warfare training - a war going on in a civilian neighborhood which implies inevitable suffering and the immoral terrorizing of innocent civilians - should have absolutely NOTHING to do with US ARMY basic training. ONLY for unique incidents such as freeing hostages could it even be considered in Advanced Infantry Training Schools.

SUBLIMINAL POSTCARDS
Br Nathanael: Official USATC post cards appear to indicate that inexperienced soldiers will be asked to conduct violence against civilian homes and establishments as policy. Can you elaborate on this?


Joe Cortina: The Basic Training Postcards promote special military operations known as “MOUT” – “Military Operations in Urban Terrain.” In other words – home invasions which have resulted in the worst military war crimes in the history of the US such as looting, pillaging, raping, and murder - is now part of basic training.

We provided no such controversial training in any of the companies or battalions or regiments I was associated with during my military tenure.

Br Nathanael: Can you describe the nature of the card you showed me that was a ‘red flag’ to what you have experienced as normal basic infantry training? Joe Cortina: I saw several cards, all reminiscent of my experiences as a basic trainee myself. BUT ONE CARD drew my attention and I found it alarming. As I began connecting the dots of the offensive card, it led me to the 29 Palms Military Survey which I will soon discuss.

The card showed soldiers forcing their way into private businesses not unlike those you might find in your OWN HOME TOWN. These were of course fabrications in the Training Center built to simulate an urban environment. It showed a “Fish Market” in Fallujah alongside of another business which could be located in any American city, “The Palace Night Club.” The front of the post card was marked URBAN WARFARE - as if it were some sort of Disney attraction.

Br Nathanael: What about the reverse side of the card?

Joe Cortina: Comments on the back of the card by a current trainee reads as follows: “MOUT – Military Operations in Urban Terrain.” What is interesting about it – my own home will be considered something abstract and impersonal: “URBAN TERRAIN.” 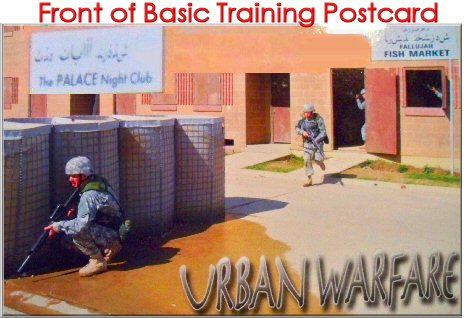 The psychology of war teaches that before an American soldier can kill a perfect stranger, a non-combatant - the first thing you do is dehumanize that person into a faceless ‘thing.’

Now devoid of all those qualities we cherish in ourselves, the US soldier does not have to deal with the dictates of his conscience when murdering a civilian in cold blood. Thus we find the use of dehumanizing terms: “hostiles” -”insurgents” - “extremists” - “terrorists.”

As the post card MOUT heading states, it can be a matter of months in which the arrival of a “civilian trainee” - (YOUR SONS) and their deployment to an “urban combat situation” becomes a real life event. Your very own 18 year old son’s first assignment may be to terrorize people in their homes or businesses – kick in their doors – smash their property. Apparently that was EXACTLY what the trainee who wrote the post card was taught. 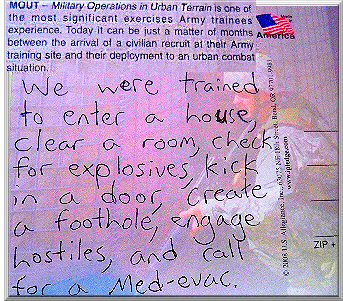 Br Nathanael: What exactly was stated on the postcard’s reverse side?

Joe Cortina: The sender wrote in ink: “We were trained to enter a house – kick in a door – clear a room – check for explosives – create a foothold – engage hostiles – and call for a medevac.”

Now – if a fellow soldier had described these presumed orders to me – the following is what it means. The trainee was to forcefully smash his way into a civilian’s home – kill anyone who even looked like they would defend their home - search for their weapons to neutralize anything they may use to defend themselves - and if anybody survived their terrorist invasion to send them to sick bay for questioning. More On MOUT Here & Here.

THE ENEMY NEXT DOOR
Br Nathanael: What is the 29 Palms Military Survey you mentioned above?


Joe Cortina: “29 Palms,” named after the US military base in which the survey was made, is one of the most frightening and most disgusting testimonies to the ACCEPTANCE of military brutality and cold-blooded murder of one’s OWN citizens by American military ever revealed anywhere. A significant percentage of the Marines interviewed admitted that if ordered to do so they would kill their own neighbors.

Br Nathanael: How can we be sure that the US Army’s Basic Training has degraded to the alarming degree you claim?

Joe Cortina: Because the example I cited of the young trainee who seemed so eager to perform his ‘duty’ and carry out orders without question happens to be my own son. What we are teaching our children at this horrible place is unconscionable. 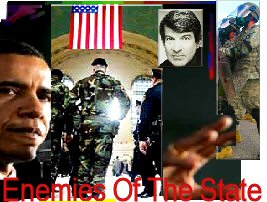 You will hear arguments from these war mongers to counter my concerns that: “It is necessary.” NECESSARY FOR WHAT? To murder more civilians here in our own country? So that these young men will now blindly follow orders and attack their OWN neighbors if Zionist-puppet Obama orders them to?

IT MAY BE TOO LATE to save my son’s soul from those who wish to transform him into a mindless murderer. But for the Love of Christ – please do not let these greedy Godless war mongers destroy your sons’ lives as well. Just Say “No” To This Evil!

Forget about Al-Qaeda or Osama Bin Laden. The chances are that VERY soon (with the declaration of martial law as the catalyst) you will be brutalized - murdered - raped – arrested – your home confiscated - by YOUR OWN SONS who have been taught that YOU are the enemy of the State and that THEY MUST follow orders. Sound familiar?…


And: New Weapons For A US Police State Click Here