“McCHRYSTAL AND OBAMA FAILED FROM THE START to connect,” reports Rolling Stone’s interview with the Afghan military chief, “The Runaway General.”

McChrystal first encountered Obama a week after he took office in 2008 when the president met with senior military officials in a room at the Pentagon known as The Tank.

McChrystal thought Obama looked “uncomfortable and intimidated” by the roomful of military brass, said a source familiar with the meeting. Their first one-on-one meeting took place in the Oval Office four months later after General Stanley McChrystal got the Afghanistan job and it didn’t go much better.

“It was a 10-minute photo op,” said an adviser to McChrystal. “Obama clearly didn’t know anything about him, who he was. Here’s the guy who’s going to run his f*****g war, but he didn’t seem very engaged. McChrystal was pretty disappointed.”

From the start, McChrystal was determined to place his personal stamp on Afghanistan, to use it as a laboratory for a counter insurgency strategy known as “COIN.”

COIN calls for sending multiple troops to both destroy the enemy and to live among the civilian population, building from scratch a “democracy” – a process that takes decades to achieve. Think of the Green Berets as an armed Peace Corps, instruct COIN enthusiasts.

“COIN is a fraud perpetuated on the American people,” says retired Colonel Douglas Macgregor. “The idea that we are going to spend a trillion dollars to reshape the culture of the Islamic world is utter nonsense.”

McChrystal’s strategy pitted him against Joe Biden who argued in a cavalier fashion that a prolonged counter insurgency would plunge America into a military quagmire, an “uptick” in US troop casualties leading to “a real mess.”

The general’s revenge against the VP? A planned response whenever a journalist might ask about the VP’s opposition: “Are you asking me about Biden? Did you say: ‘Bite Me?’”

“I WOULD LOVE TO KICK McCHRYSTAL IN THE NUTS,” says a former Special Forces operator who has spent years in Afghanistan. “His rules of engagement put soldiers’ lives in even greater danger. Every troop will tell you the same thing.”

The general’s answer to this critic? “We’ve shot an amazing number of people,” McChrystal boasted.

Before getting fired (”tendered resignation”) and replaced by General Petraeus for his “ill advised” interview with Rolling Stone which “endangered” national security (what a joke) McChrystal was gearing up for another offensive in southern Afghanistan - but the prospects looked bleak.

In June, the death toll for US troops passed 1,000 and the number of IEDs (roadside bomb casualties) doubled. Outpacing Vietnam as the longest war in American history, the conflict has failed to win over the civilian population whose attitude toward the engagement ranges from intensely wary to openly hostile.

As the conflict continues to drag on and deprived of more troops requested by the general, McChrystal refers to the media-hyped offensive in Afghanistan’s Marjah region as a bleeding ulcer: 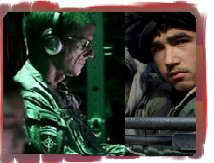 “There aren’t enough US forces to provide the security that’s needed to win the loyalty of wary locals.

“HOLBROOKE IS LIKE A WOUNDED ANIMAL,” McChrystal recently observed, “he keeps hearing rumors that he’s going to get fired so that makes him dangerous.”

“Holbrooke just comes into the scene,” McChrystal adds, “pulls on a lever, whatever he can grasp onto. But this is COIN, a well-planned strategy, and you can’t just have someone yanking on shit.”

Richard Holbrooke, a Zionist Jew born of Jewish parents, (Holbrooke changed his Jewish surname “Moos” to the Gentile-sounding one “Holbrooke”), is Obama’s envoy to Afghanistan.

At one point on a recent trip to a NATO meeting in Paris, McChrystal checks his BlackBerry. “Oh, not another e-mail from Holbrooke,” he groans. “I don’t even want to open it.”

The general clicks on the message and reads the salutation out loud, then stuffs the BlackBerry back in his pocket, not bothering to conceal his annoyance. “Make sure you don’t get any of that on your leg,” McChrystal jokes, referring to the e-mail.

The fired Afghan military chief’s parting shot? It goes to Jim Jones, former NATO commander in charge of the Afghan war and now Obama’s National Security adviser. “Jones is a clown who remains stuck in 1985,” said McChrystal in the Rolling Stone interview.