Jews, Generals, & The US War Machine 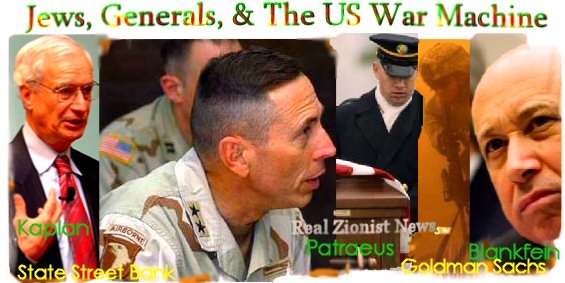 AMERICA’S CHANGE FROM A CIVILIAN TO A MILITARY ECONOMY reached a point of no return in the 1960s.

From then on, a perpetual “war machine” was in motion with Wall Street Jewish investment banks funding US armament industries.

The change can be traced to Truman’s National Security Council Paper, “NSC-68”, which put forth that America could sustain its economic growth by applying John Maynard Keynes’ emphasis on the role of government to the military or “security” sphere.

Truman signed the Paper as a basic US policy doctrine on September 30, 1950. Although the world was at peace, the directive called for increasing the annual US arms budget by 350%. “Military Keynesianism” soon became the essence of America’s economy. And the Zionist Jews of Wall Street took full advantage of this new investment opportunity.

While Military contracts were awarded to defense contractors to maintain the “Cold War” with Russia, US industrial plants began to decay. Outsourcing came into vogue as Americans bought TV sets, cameras, and cars from overseas. American labels on foreign goods were just American wrappers on Asian products.

Jewish bankers were no longer interested in domestic civilian production. Their market was the US government and payments were fed by the Jewish-owned Federal Reserve. So why bother investing in American-made cameras or washing machines when you could invest in bombers and drones? The profits were much larger and the risks were zero.

Reaching a position of permanence after 9/11, “Military Keynesianism” had produced a “National Security State” — controlled by Zionists and financed by Wall Street Jews. By signing NSC-68 in 1950, Harry Truman had given birth to a Military/Zionist global beast.

THE PUSH FOR NEW AND MORE DEADLY WEAPONS is currently fueled by Jewish investment banks, with Goldman Sachs and State Street Corporation at the lead.

With military spending being the largest single item in the federal budget for fiscal 2010 and calls from Obama for a record $708 Billion to fund his wars, defense contractors get their marching orders from Jewish investment analysts who dictate contractors’ business policies from their financial towers on Wall Street.

Based on a Goldman Sachs Report published on June 5, 2009, which forecasted a decline in investments in defense industries, General Dynamics announced that it was acquiring Axsys Technologies, a company that provides high-end optics for unmanned drones, in order to attract investors. 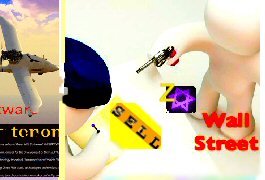 In another example of Jewish bankers’ control of Defense contractors, shares of Lockheed Martin were driven down by 1.3% on January 6, 2010, after Goldman Sachs told investors to “sell” rather than “hold” Lockheed stocks.

Not only do the Jews on Wall Street control military industries externally, but they maintain leverage over the defense contractors, internally. A greater amount of power over the military industries has been concentrated into fewer hands - (it only takes 10% ownership of stock to control a widely-held corporation) - and these hands are those of huge Jewish investment blocs.

Lockheed Martin, Boeing, and Northrop Grumman have large Jewish banks as their major investors. The huge investment bank, State Street Corporation, is the major stockholder of these 3 top US defense contractors. In the Board of Directors of SSC, one can find the names of Robert S Kaplan (Former Senior Director of Goldman Sachs); Robert Weissman; and Peter Coym (Former Chairman of Lehman Brothers.)

State Street Bank owns 18.99% of Lockheed Martin stock, 11.09% of Boeing stock, and 9.48% of Northrop Grumman stock. Co-shareholders in these companies as well as in Halliburton and Raytheon, include the Jewish Investment banks, Goldman Sachs, Oppenheimer Funds, and Capital Research And Management Company.

In other words, no General of America’s armed forces, (and thus the entire US military), makes a decision apart from the Jews on Wall Street who control his ability to wage war with the deadly armaments they provide. View List Of Defense Investors Here. 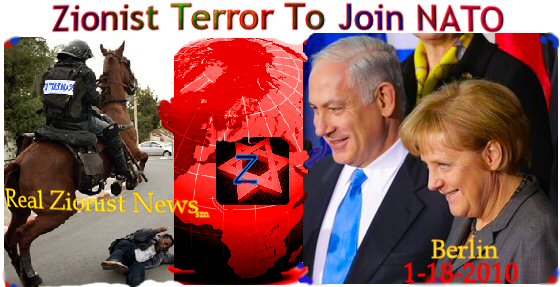 ISRAEL TO JOIN A GLOBAL NATO

ISRAEL LAUNCHED A DIPLOMATIC INITIATIVE in an effort to influence the outcome of NATO’s new “Strategic Concept,” reported the Jerusalem Post on January 13, 2010.

Participating in NATO’s Strategic Concept Seminar this January, Israel and other members of NATO’s Mediterranean Dialogue, joined former US Secretary of State, Madelyn Albright, who Chairs the Group of Experts on NATO’s new Strategic Concept, in expanding bloodshed and war crimes throughout the world.

Albright, (of Czech Jewish origin and who ordered NATO’s bombing of Serbian civilians in 1999), said at the opening session, “Partnerships are central to NATO’s future. The passing years have created the need for a NATO of greater reach. We have learned that partnerships can act as a force multiplier.” View Albright’s War Crimes Here.

IN A SERIES of joint military drills since 2004, Israel has been part of US-led NATO’s quest to become a Global Military and Police force with membership advocates in key positions in America. General James Jones, Obama’s National Security Advisor, is a major promoter of Israel’s inclusion in the alliance.

In the September/October issue of Foreign Affairs, published by the Council on Foreign Relations, Zionist Jew James Goldgeier, wrote an article called “Global NATO” which called for Israel’s membership in NATO: 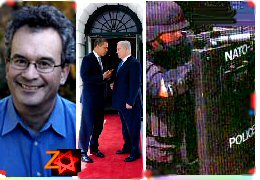 “With little fanfare – and even less notice – NATO has gone global. The principle enshrined in Article 5, that an attack on one is an attack on all, must remain at the core of the alliance. Potential new members like Israel may not pose much of an issue in this respect. For after all, the US already guarantees Israel’s security.” View Entire Story Here.

On January 23, 2010, a delegation of Israeli cabinet ministers, headed by Prime Minister Benjamin Netanyahu, held a joint cabinet meeting with their counterparts in Berlin. The subject under discussion was Israel’s intention to station German-made-and-subsidized Dolphin submarines in the Persian Gulf bordering Iran.

DURING THE BERLIN TALKS, Israel’s Debka File reported that the recent deployment of the USS Dwight D. Eisenhower Carrier Strike Group in the Persian Gulf “added muscle” to the words of General David Petraeus, who said that Iran’s nuclear infrastructure “can be bombed.” Iranian officials have subsequently questioned the West’s 90 war vessels in the Gulf, calling it a “military environment” arrayed against Iran.

“Who can make war with the beast?” cry the masses in The Revelation of St John. Arising out of the global sea will come this beast of military stature.

The stage is now being set for the emergence of the Anti Christ. And he, like the Zionists and their shills now in power, will be a Jew, a General, and the head of global war machine…