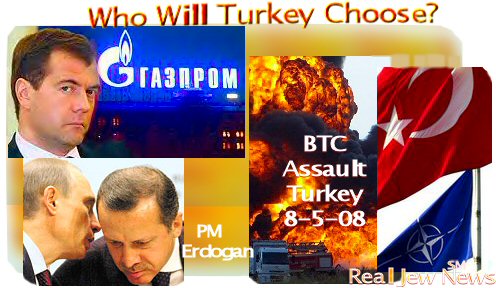 @ Rense.com Here
VLADIMIR PUTIN HAS LOOKED INTO THE SOUL of the West and has decided that the NATO participating nations of Europe need Russia more than they need NATO.

And one NATO-participating nation in particular, Turkey, is being put to the wall to decide against both the US and NATO in favor of Moscow.

On August 5 2008, only three days before Georgia invaded S.Ossetia, Kurdish separatists set fire to the US funded Baku-Tbilisi-Ceyhan (BTC) pipeline near the eastern Turkish city of Erzincan, shutting the pipeline down and raising questions about the pipeline’s security.

Covering the story, Der Spiegel interviewed Richard Morningstar, Bill Clinton’s BTC pipeline negotiator, who said that Russia was unhappy about the pipeline from its inception:

— “When negotiating the pipeline, the Russian foreign minister told me: ‘We know you, and we do not like what you are doing.’ They were not pleased that the BTC bypassed Russia and secured a transport route for oil from Azerbaijan through Georgia to Turkey” — Here.

Morningstar added that the current Georgian conflict could create havoc with the BTC:

— “If the Russians were to attain a dominant influence in Georgia, they could interfere with the pipeline from an economic standpoint — by raising transit fees” — Here.

In a geopolitical maneuver in 1997, Russia’s GAZPROM enlisted Turkey in a joint pipeline effort known as the Blue Stream project.

In November 2005, Blue Stream was officially inaugurated in Turkey with Putin attending the ceremonies. As of January 2007, Turkey had received well over 9.6 bcm of gas since the pipeline launch, as reported by GAZPROM.

Now Turkey must look into its own soul and decide who it needs more, Russia or NATO? 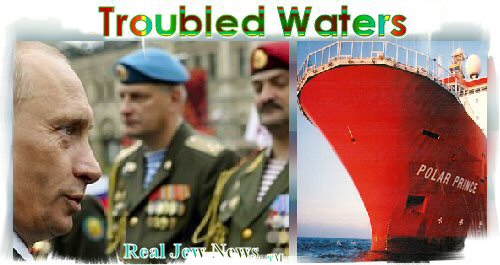 TURKEY SAYS ‘NO’ TO US SHIPS

TURKEY DENIED PASSAGE unto 2 US hospital ships navigating through the Turkish Straits into the Black Sea. Turkey claimed that the ships violated the Montreux Convention Of 1936 which governs the traffic of military ships to the Black Sea.

According to the Convention, military ships cannot exceed 45,000 tons. The tonnages of the 2 US ships both exceeded 69,000 tons making them ineligible for passage.

Just prior to Turkey’s denial of the ships’ passage, Russia’s military chief, General Anatoly Nogovitsyn, warned Turkey that the NATO ships presently docked in the Black Sea “are a serious threat to our security.”

Nogovitsyn reminded Turkey that under the Montreux Convention warships could only stay in the Black Sea for 21 days.

— “If the NATO ships continue to stay in the Black Sea after the expiration of 21 day-period, then I would like to remind you that Turkey would be responsible” — Here.


— “Turkey is our NATO ally and should have been more supportive of their American allies. This brings back the bad taste of Turkey barring American troops from going into Iraq through Turkish ports and Turkish territory in 2003 - a step that vastly damaged Turkish- American relations. I’d hoped we were putting that behind us” — Here.

Ariel Cohen also knows that Turkey is an ally of the Zionist State of Israel. But with the pressure Turkey has been receiving from Russia these days, a faltering alliance between Turkey and Israel could soon become a “bad taste” in the mouth of Mr Cohen.