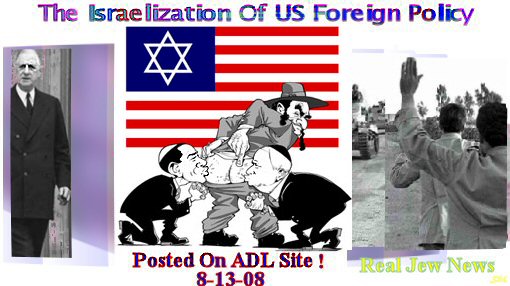 Above Poster From Anti Defamation League’s Own Site! Click Here!

Sources: A Special Relation Comes Home Here;
Israel’s Blackmail Of America @ Rense.com Here
THE ISRAELI ‘6 DAY WAR’ of 1967 drove the leaders of Israel to look for a new partner.

This was because President De Gaulle suspended all arms shipments to Israel because Israel initiated the 6 Day War against French advice.

In November of 1967, De Gaulle had some choice words about the Jews who had spurned his counsel - and a warning to the world:

“The establishment of a Zionist homeland in Palestine has raised certain fears. The question must be asked whether the settlement of this community on a land acquired under more or less justifiable conditions would not lead to continued conflicts.

Some people even feared that the Jews, an elite people, sure of themselves and domineering, would, once assembled again on the land of their ancient greatness, turn their Zionist pursuit into a burning and conquering ambition.

Since 1956, we have witnessed a warrior State of Israel that is determined to increase its boundaries. Israel has reached further objectives in only six days of fighting. Now Israel organizes itself on conquered territories, the occupation of which cannot go without oppression and expulsions” Here.

Israel then turned to the US, the world’s leader in military technology. At the same time, Syria & Egypt asked Russia for assistance. Israel knew it could use “Cold War logic” to persuade the US to throw its military might behind the warrior state.

And given the influence of wealthy American Jews & the Jewish controlled media - along with the prospects of expanding an already powerful ‘Jewish Lobby’ - the conditions were now ripe for the ‘Israelization of US Foreign Policy.’

Illinois Congressman Paul Findley was one such victim of the Jewish Lobby’s manipulations. Owing to the Jewish Lobby’s lavish campaign spending on Findley’s opponent, coupled with a ruthless media campaign against him, after 22 years in Congress, Findley lost the election in 1982 simply because he challenged the ruling line on US support for Israel. (Jews have corrupted our political system absolutely.)

In October of 2007, Findley had these choice words for the Jewish Lobby:

“There is an open secret in Washington. All members of Congress swear to serve the interests of the United States - but there is an unwritten exception: The interests of one small foreign country always trumps US interests. That nation of course is Israel” Here.

The Jewish Lobby subverts democracy when it engages in smear campaigns that intimidate and silence critics. Is it not time that we call politicians to account for their undying allegiance to a foreign state which serves only the interests of the Jews? 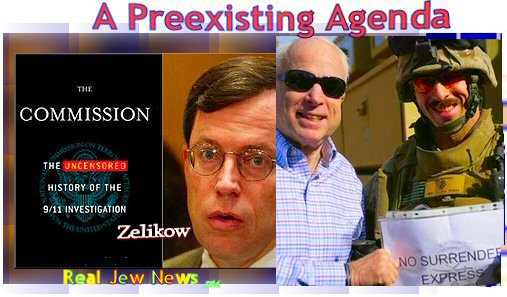 MASKED BENEATH THE BANNER of The War On Terrorism, lurks the intrigues of the omnipresent Jewish neocon political bloc.

According to foremost political analysts, the events of 9/11 allowed the preexisting ideological agenda of the neoconservatives to be “taken off the shelf and relabeled as the borderless War On Terror.”

Indeed, the traumatic effects of the induced 9-11 events enabled the Zionist agenda of the Jewish neocons to become the foreign policy of America.

What is this neocon agenda?

The US should use its military to establish an empire that includes the whole world - a global Pax Americana with Israel as its partner.

The US should implement a doctrine of preemptive war for the sake of bringing about “regime change” in countries regarded as hostile to US-Israeli interests.

The US should use this new doctrine to gain control of the world’s oil, both in Afghanistan, with its proximity to the Caspian Sea, & in Iraq.

IN AN INTERVIEW on March 24 2008, former UN official, Dr Richard Falk, called for an official commission to study the role of the Jewish neocons in the 9/11 attacks. Falk said, “The neoconservatives looked for a situation that would galvanize the American people. There is much grounds for suspicion of a neocon role in the events of 9/11.”


And: “The War On Terror Is A Jewish Hoax” Click Here

Or Send Your Contribution To: