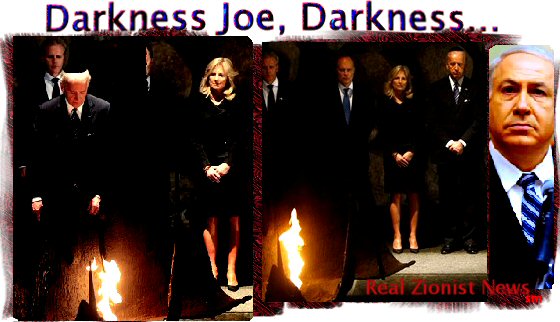 “I HAVE NOTHING TO OFFER YOU BUT BROKEN GLASS,” Israeli Prime Minister Netanyahu addressed US Vice President Biden during an after-dinner ceremony in Jerusalem on March 9, 2010.

Netanyahu had prepared a symbolic gift for visiting Vice President Joe Biden: a framed document announcing that several trees were planted in Jerusalem in memory of Biden’s mother, a loyal supporter of Israel.

But with Biden’s mission to persuade the Israeli government to begin shrinking Greater Israel back to its pre-1967 borders, Netanyahu leaned on the present (NOT “accidentally” as reported by the Jew-owned press) and shattered the glass frame.

Then came Netanyahu’s cyptic warning and by way of indirection, a threat to Obama: “I have one thing to offer you right now, and it’s broken glass.” View Full Photo Here.

It got worse. At a later tour of Israel’s Holocaust memorial museum, Yad Vashem, the lights in the Hall of Remembrance “unexpectedly” went out as a prayer for the dead was chanted.

Catching Biden’s security detail by surprise as they anxiously stood for over 60 seconds in utter darkness, only the “eternal fire” that honored the Jewish dead spread its ominous light upon the Biden contingent.

By the time the lights flickered back on, Biden’s Middle East fortunes were sealed with an Israeli announcement that it would build 1,600 new homes for Jewish settlers, ignoring US and Palestinian objections. On Biden’s departure for Jordan, Ha’aretz reported that Israel plans to build 50,000 new homes in East Jerusalem over the next three years.

The “broken glass” and the “moments of darkness” that Biden experienced were not chance events. Nothing happens at official Israeli gatherings that is not carefully planned and orchestrated in advance. And in spite of Biden’s groveling before Netanyahu and Peres, with vows of Israel being the “centerpiece of US policy,” the Vice President’s cowering was met with glassy eyes by the leaders of the “master race.”

Symbolic acts, such as the breaking of a glass by a Jewish groom before making vows of faithfulness to his bride at every Jewish wedding, are part of Jewish tradition. When the Jewish groom crushes the glass beneath his right foot, he silently pledges to avenge the destruction of the Second Temple in Jerusalem and wage war on all those who would perpetuate that destruction.

David Wilder, spokesman for Jewish settlers in the West Bank city of Hebron, said he did not necessarily believe “all of this happened during Biden’s visit to Israel because of divine intervention” but he saw the mishaps as “very symbolic.”

“When the United States doesn’t play its cards right, Wilder said, “it gets a gift of broken glass,” noting also that “one of the plagues in Egypt was darkness.”

Surely none of this was lost on Biden who is well aware of the Mossad’s assassination teams who rove throughout the world targeting for the dung heap those it deems to be Israel’s enemies. Netanyahu has made it known through Jewish-styled symbolism that both Biden and Obama could be next on the Mossad’s hit list.

Shards of glass that cut and bleed, and a darkness shrouding the memory of the dead are ominous signs of what awaits those who oppose the masters of the goyim. Surely, the look of the “master race” was written all over Netanyahu’s face as he handed Biden the document with sharp pieces of the glass frame scattered upon it.

Netanyahu and his Jewish agents in America were deeply aggrieved when Obama went to Cairo on June 4, 2009, for an address to the Muslim world without stopping in Israel.

That such a visit would sabotage Netanyahu’s quest for a Greater Israel through continual expansion and elimination of competitive states in the region was carefully filed in the annals of Israel’s foreign policy posture towards America. Symbolic messages portending revenge were not long in coming…

And: ‘Religious’ Zionism As A New Political Force Click Here