The Protocols For Goys - Yesterday AND Today

THE PROTOCOLS FOR GOYS
Yesterday AND Today

AT A CONFERENCE IN ISRAEL LAST AUTUMN, Jewish billionaire and media mogul, Haim Saban, announced his formula for influence peddling.

As if taken straight from the Jewish Manifesto for world conquest, “The Protocols Of The Learned Elders of Zion,” Saban outlined the very same blueprint as laid down by the learned elders over a century ago.

Describing his influence peddling in ‘protocol’ fashion, Saban specified three ways for Jews to be influential in American politics: “Make donations to political parties, establish think tanks, and control media outlets.” In articulating his program, Saban said nothing different than what the Protocols put forth some one hundred years before. View Entire Story Here. 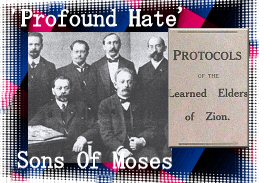 A document demonstrating a deep hatred toward the “Goyim,” the Protocols is the text of a series of addresses made to an inner circle of Jewish conspirators in late 19th century Russia by Asher Ginzberg, detailing his plans for achieving world Jewish conquest.

The son of a Jewish tax collector, Ginzberg was born in Kiev and later settled in Odessa, the Jewish center of activist agitation. Here he established in 1889 his Zionist group, “Sons Of Moses,” where he adopted the pen name, Achad Ha’am, meaning “one of the people.”

It was to the “Sons of Moses” that Ginzberg, (aka Achad Ha’am), delivered his “protocols” for the annihilation of Christian culture and the ascendancy of Jewish domination.

The Jews, of course, deny the authenticity of the Protocols, claiming that it is a “forgery.”

Challenging this denial, Henry Ford stopped all Jewish mouths for all time when he stated: “The Protocols are too terribly real for fiction, too well-sustained for speculation, too deep in its knowledge of the secret springs of life for forgery. They fit what’s going on now.”

AMONG ITS PLANS FOR JEWISH WORLD DOMINATION, the Protocols called for Jewish control of the press and media, hegemony over international banking, creation of a Jewish academic class, and the manipulation of the political process.

As we note the current Jewish control of the media, (which Jewry itself admits although they removed the damning article by Ben Stein), we must also monitor Jewish manipulation of the political life of all “democratic” nations.

By destroying the aristocracy, “the only defense of the Goyim,” as stated in the opening chapter of the Protocols, Jewry has succeeded in creating the political system of democracy in which the representatives of the herd are bought-and-paid-for by the Jews.

A recent example of this Jewish practice of ‘buying influence’ is evidenced by Obama’s rise to power…from a nobody, to senator, then to president…in three Jewish-bought steps.

How did an unknown, black communist agitator in Chicago, ascend the political ladder so easily? By Jewish money putting into effect the dictates of the Protocols, that’s how.

OUT OF THEIR OWN MOUTHS

IN A 2008 ARTICLE in the Chicago Jewish News, “Obama And The Jews,” prominent Jewish figures are quoted as saying: “Jews made Obama. Wherever you look there is a Jewish presence.”

That presence began when the daughter of Real Estate maven Phillip Klutznik, Betty Lu Saltzburger, (known as the behind-the-scenes champion of Obama’s political career), put her money where her mouth was.

After meeting Obama in 1991, Saltzman said to her husband, “He’s going to be our first black president.” As her involvement with Obama grew, Saltzman remarked, “He’s right on all the issues when it comes to Israel. Obviously I’m not going to support someone who is opposed to Israel.”

Saltzman soon hired David Axelrod of the political consultancy group, Axelrod & Associates, to begin a media-program which would realize her dream of installing the first black president.

Grooming the young black activist, Saltzman and Axelrod found a means of bringing the unknown Obama into the halls of Capitol Hill in the 2004 Illinois Senate race.

How did they catapult an unproven figure into national prominence? By the political merits of the senatorial aspirant? Not at all - Obama had no political credentials whatsoever. They used instead an underhanded scheme of SMEARING the contending Democrat candidate, Blair Hull. 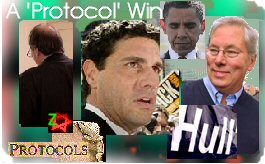 Through their Jewish connections in high legal places, Saltzman and Axelrod brought Hull’s SEALED divorce proceedings to light and then LEAKED their damaging contents to the public, thus forcing Hull to withdraw his candidacy.

The VERY SAME THING happened to the Republican contender, Jack Ryan, when Axelrod leaked to the Chicago Tribune an alleged “sex club involvement,” forcing Ryan to drop out of the race. This left Alan Keyes as the Republican candidate, an obvious loser against the media-hyped Obama. View Entire Story Here & Here.

As Henry Ford convincingly said, “The Protocols fit what’s going on now,” it is by their own actions that Jewry has proven The Protocols Of The Learned Elders Of Zion to be the foremost threat to our troubled and Jewish-corrupted world today…

And: The Protocols Of The Elders Of Zion Fulfilled! Click Here