The US ‘Recovery’ And Bernanke’s Jewish Lies 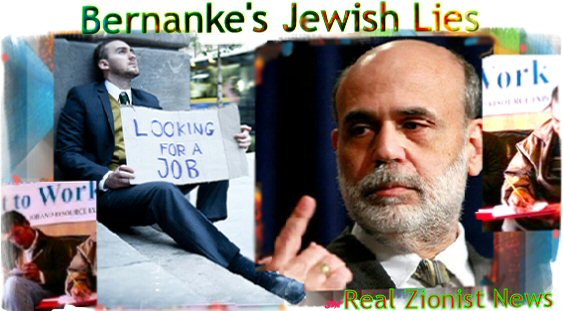 THE US ‘RECOVERY’ AND
BERNANKE’S JEWISH LIES

“2010 WILL BE A YEAR OF RECOVERY,” said Federal Reserve Chairman, Ben Shalom Bernanke, in his Semiannual Monetary Policy Report to the Congress last year.

With official high flung “monetary” verbiage designed to “disinfo” the masses and the political hacks of Capitol Hill whose jobs depend on pleasing Zionist Jews, Bernanke pulled off yet another of his forecasting lies.

Indeed, the masters of deception reside at the Federal Reserve Bank where the money to keep America afloat is CREATED by simple book entries. And the ever-accruing DEBT of that loaned-money WITH INTEREST keeps America on its knees before the Jews who own and run the Fed. (It is NOT ‘Federal’ and there are NO ‘Reserves.’)

Along with their domestic stranglehold on America, the Federal Reserve has secret dealings with foreign governments and Jewish international financial organizations with regard to what they buy and sell and what markets they interfere with. 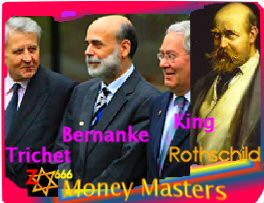 This is the main reason why Bernanke refuses to disclose where the $2 Trillion TARP bailout money went and why he lied to cover his ‘international buddies’ by saying that divulging information would “endanger private banking interests.” (The Fed is ALSO a “private banking interest” owned by a consortium of international Jewish banks led by the Rothschild Dynasty in Europe.)

Even though Bernanke declared that the US recession was “over” and that recovery was “underway” last autumn, the effects of the recession are painfully felt by 20 million Americans who collected unemployment checks in 2009. These jobless Americans, who are being told to expect a jobless recovery, don’t live in fancy homes nor wear expensive suits like Bernanke and his compatriots at the Washington Post who publish Bernanke’s lies.

Bernanke’s latest ‘prediction’ was made on December 9, 2009, when he addressed a crowd of his fellow Zionist Jews at the Economic Club of Washington. Telling his buddies that the “economic recovery is in its early stages,” Bernanke was willfully ignoring the countless store closings, mortgage defaults, and growing bankrupt States that foretell a coming depression - not a ‘recovery.’

Apparently, the reports of financial hardships that most Americans are experiencing vanishes into thin air whenever Ben Shalom Bernanke tells his Jewish lies.

AS UNEMPLOYMENT FIGURES SOAR, US retail sales and the jobs the sales provide, are plunging into an abyss.

Adding to the blight on Bernanke’s ‘recovery,’ housing-industry specialists are forecasting a huge increase of foreclosures for 2010. (A record 3 million homeowners defaulted on their mortgage payments in 2009.)

With foreclosure notices expected to rise to 3.1 million this year, experts say that 50% more people will lose their homes to a bank this year than they did in 2009. View Entire Story Here. 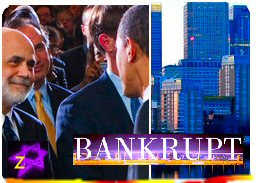 WITH 20 MILLION AMERICANS UNEMPLOYED, responsibility for unemployment benefits lies largely in the hands of the states. As of January 20, 2010, two dozen state unemployment funds have hit the skids and nine more states are expected to be in the red by mid-summer.

Following California and Illinois ($3 billion in unpaid bills) into bankruptcy, additional states such as Arizona, Tennessee, and Kansas, are expected to follow. And due to record high unemployment claims, 25 states have run out of funds, forcing them to raise taxes, cut expenditures, and borrow from the federal government.

Where will it all end? …At the doorstep of Bernanke’s loan machine at the Federal Reserve. Creating more money, deepening American tax payers’ debt to the Fed, and turning over more control to the Jews who own America’s central bank, is not the way to put an end to Bernanke’s lies.

IN AN OBVIOUS MEDIA PLOY designed to disinform the dumbed-down masses, Bernanke and his counterpart at the Bank of England, Zionist Jew Mervyn King, engaged in a ‘debate’ on the question of smaller banks versus larger banks.

The Jewish-owned Western press failed to report that Bernanke engaged in a questionable transfer of US funds in March 2008. It was a Russian financial news agency that uncovered Bernanke’s creation of a “swap line” which credited $200 billion USD (American tax payers’ hard-earned money) in short 28-day loans to the European Central Bank and the Swiss National Bank.

Bernard Connolly, British economist and former member of the European Commission, author of “The Rotten Heart of Europe,” recently told The Telegraph that central bankers, acting behind the cover of financial “false flags,” seek to gain greater control over world affairs:

“The mission of the international central bankers is to provoke continual financial crises. The purpose of these crises is so the bankers can arrogate more power to themselves.” View Entire Story Here.

ENACTING THEIR FINANCIAL INTRIGUES within the layers of Jewish banks that control ALL central banking systems, it is likely that international Jews are funding other crises besides financial ones.

Who funded the Greek “arsonists” whose fires resulted in the toppling of Karamanlis and his alliance with anti-Zionist Russia?

The central bankers are the probable money source. (They funded both the Bolsheviks and the Nazis.)

I have said it before and I will say it again. The Anti-Christ is at the doors. He will be a Jew. And he will be funded by the international Jewish banking cabal…

And: The Anti-Christ Will Be A Jew Click Here

And: Jewish Money-Lender Bernanke Should Be Fired Click Here