Putin & The Jewish War On Iran

The Jewish War On Iran, IRAN: Another War For The Jews?, Putin Articles 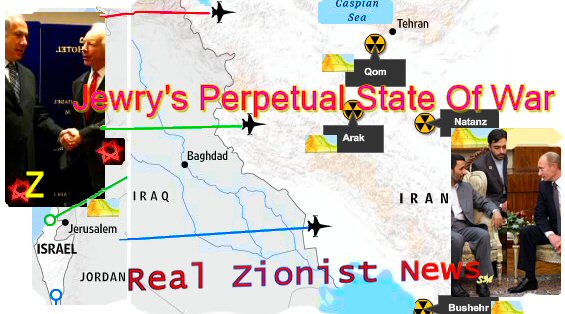 “IRAN HAS NO NUCLEAR WEAPONS,” Prime Minister Vladimir Putin told his fellow Russians during his annual Question-and-Answer session on December 3, 2009.

Expanding on his announcement, Ahmadinejad defied the Zionist-controlled West by saying that his plans to build more uranium enrichment facilities were not a “bluff” and that sanctions against his country, “would not work.”

Putin, in his quest for a stronger alliance with Iran, has consistently opposed sanctions targeted against Iran’s nuclear program, warning the West that an attack on Iran would be “dangerous” and “unacceptable.”

In spite of the January 2010 conference of Jewish leaders to push Congress into further action against Iran regardless of provoking a global conflict, Vladimir Putin pledged on January 26, 2010, to “complete Iran’s Bushehr nuclear plant on time.” 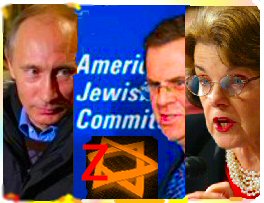 On the heels of Putin’s pledge, a group of US Senators led by Zionist Jews Chuck Schumer of NY, Dianne Feinstein, who chairs the Senate Intelligence Committee, (why do Jews chair all the Committees?), and Joseph Lieberman of Connecticut, signed a letter to Obama demanding “crippling sanctions” against Tehran “as early as this month.”

Former NY Senator and current US State Department head, Hillary Clinton, (she’s owned by the Jews), told Chinese leaders in Paris on January 29, 2010, that they risk “diplomatic isolation” unless they support US-led sanctions against Iran. (Hillary tried it on Russia three months ago and got a resounding “Nyet!” China will surely give Hillary a similar “Bu!”)

In seeking to build further ties with Iran, Putin affirmed last autumn that Russia would continue to develop bilateral and multilateral projects with its southern neighbor and welcomed Iran’s contribution to the Shanghai Cooperation Organization:

“Our relations with Iran are developing in many directions. Our strong political ties, growing trade, which has reached $3.5 billion, and the large number of prospective projects are strengthening Russian-Iranian ties. Iran’s participation in the Shanghai Cooperation Organization has bolstered these ties.” View Entire Story Here.

One of these “multilateral” projects is the Iran-Turkmenistan Pipeline, inaugurated on January 6, 2010. The pipeline will link Russia, Iran and China through Central Asia’s oil rich Caspian region, redrawing Eurasia’s energy map.

In a clear sign of opposition to the Zionist West’s “unipolar” dictates, Iran is turning to Russia and China, not only as defenders of its nuclear energy expansion, but as builders of its economic influence in Eurasia. “Zionist Police Beware!”

SEEKING A GLOBAL SHOWDOWN with Russia and China, Zbigniew Brzezinski, who is recognized and feared by Zionist Jews as Obama’s foreign policy adviser, is intent on bringing Iran back into the Western orbit. In Brzezinski’s world view, Iran could be a valuable US asset to be played against Russia and China.

Even with his protege at Defense, Robert Gates, and his reputation as a global strategist, Brzezinski has all but admitted that he simply is not strong enough to withstand the power the Jewish lobby wields over Obama’s decision-making in foreign affairs.

This has recently come to light in Brzezinski’s latest article for the Council of Foreign Relations, “From Hope To Audacity.”

Beginning his treatise with the premise that the US should not be at war with Islam, Brzezinski proceeds to take on the “Second Echelon” in Obama’s administration which includes Zionist Jews Dennis Ross, Special Adviser on Iran, Rahm Emanuel, Chief of Staff, and Zionist shill Hilary Clinton at State.

Opening himself in his article to further accusations of being an “Anti-Semite,” (Alan Dershowitz initiated the lie), Brzezinski challenges the Zionist status quo and adds insult to injury to his already stated position that Obama should negotiate with Hamas:

“It is not fashionable to say this, but much of the current hostility toward the US in the Middle East has been generated by the bloodshed and suffering produced by the prolonged Israeli-Arab conflict. Israel’s refusal to negotiate with the Palestinians in good faith compounds the problem.” View Entire Story Here.

Moving on in his essay to the “stalemate” in Obama’s policy regarding Iran’s nuclear ambitions, Brzezinski goes toe to toe with the Jewish “insiders” at the White House: 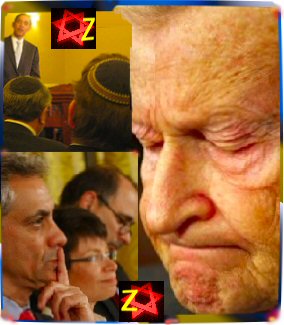 “Obama’s two special advisers, David Axelrod and Rahm Emanuel, participate in significant decision-making. Both of them sat in on the president’s critical September meeting with Israeli Prime Minister Benjamin Netanyahu.

As a result, Obama’s redefinition of US foreign policy is vulnerable to dilution by these upper-level officials who tend to yield to pressures from domestic interest groups.

This fosters a reluctance to plan for a firm follow-through on bold presidential initiatives should they encounter a foreign rebuff reinforced by powerful domestic lobbies. Netanyahu’s rejection of Obama’s demand that Israel halt the construction of settlements is a case in point.” View Entire Story Here.

In his concluding theme, “Domestic Impediments,” Brzezinski exposes the Jewish Lobby and their total control of Obama’s foreign policy decisions:

“Special interest lobbies have become overly influential in US politics. Thanks to their access to Congress, a variety of lobbies — some financially well endowed, some backed by foreign interests — have been promoting, to an unprecedented degree, legislative intervention in foreign-policy making.

Promoted by lobbies, Congress not only actively opposes foreign policy decisions but even imposes some on the president. The pending legislation on sanctions against Iran is but one example. Such congressional intervention makes it more difficult to ensure that US — not foreign — interests are the point of departure.” View Entire Story Here.

CRYSTALLIZING AN ANTI-WEST AGENDA, on May 12, 2009, Putin signed the Russian National Security Strategy, effective 2010 - 2020. The document reflects the sharp deterioration in relations between Russia and the West over the last decade.

Underlining Russia’s hostility toward NATO expansion and Russia’s claims to attain strategic parity with the US, upon approving the Strategy Paper, Putin embarked on an aggressive alliance with Jewry’s new number one enemy, Iran. (Who will be their next enemy?)

In July 2009, joint Russia-Iran military exercises in the oil-rich Caspian Sea, dubbed, “Regional Collaboration for a Secure and Clean Caspian,” signaled a new trend in Russia-Iran military cooperation. The maneuver, involving some 30 vessels, is seen by some analysts as a way for the two countries to join forces against the US, which pro-Iranian observers refer to as “the intrusive Western superpower.” 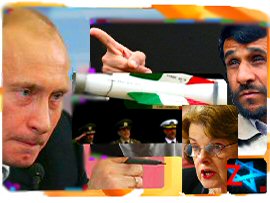 Following the new trend, although it has not yet been delivered, Putin knows that the US and its client state, Israel, don’t want their new air defense capability, the S-300 missile system, sold to the Iranians.

The contract between Russia and Iran, signed in 2005, is currently “under review” by Putin, in an obvious episode of political posturing. Russia’s official news agency, Ria Novosti, reported in November 2009, that “Russia will not freeze the contract as a concession to the United States.” Iran’s news agency, Press TV, affirmed that the sale “will take place” and that delays are due only to “technical” issues.

An agreement between GAZPROM and Armenia to build a refinery that would serve both Armenia’s needs as well as export to Iran, is about to be finalized. On the top of world Jewry’s list for the next level of sanctions against Iran is refined petroleum products. The joint effort between Putin and Armenia will nullify these sanctions.

Demonized by the West’s Jewish-occupied press, Vladimir Putin continues to be a thorn in Jewry’s side. Nevertheless, Putin displayed his resolve to dismantle their unipolar world when he called for a “time of enlightenment” at Davos last year. But the Zionist Jews who continue to maintain a “time of darkness,” keep on pushing for WW III…