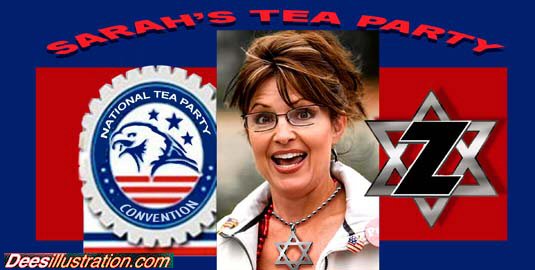 THE ZIONIST BEAST THAT NOW RULES AMERICA has usurped and consumed — like a drive-thru lunch at McDonalds — the latest populist flicker on the otherwise fascist political landscape…the ‘Tea Party Movement.’

Cleverly, deftly, the Zionists - as they always do - identified their target, sized up its strength and cohesion, and moved in for the kill on the middle-aged political (and otherwise) haunches of 2012 Presidential candidate-to-be, Sarah Palin.

Ms. Palin, who apparently (mercifully) turned down, some time back, a purported multi-million dollar nude photo shoot to continue running with the Zionist satanic gangster elite…sensing a far bigger payday down the road. (If she was a 250 lb walking, homely dumpster of a woman, there would be no ‘Sarah Palin’ in this psychotically image-driven political freak show ‘culture.’

The shrewd, leveraged use of avowed Zionist and Israel-lover Palin to co-opt the Tea Party should come as no surprise to anyone.

For those who still practice the dying art of ‘memory,’ you’ll recall that shortly after she was installed as (designated loser) McCain’s Vice Presidential candidate, some felt that, as an outsider, Palin might actually be someone in the American political zoo who was not on bended knee to the de facto US Government in Tel Aviv.

As we all saw in short order, it didn’t take the Alaskan huntress long to show up in what might as well have been skull cap pasties declaring her undying loyalty (Read: ‘abject subservience’) to Zionist Israel and, by extension, the ultimate Jewish ‘God’s Eye’…the Rothschilds of the City of London.

THE ‘KINDA CUTE’ TEA PARTY MOVEMENT began as a loose affiliation of a smattering of noisy American individuals and groups united in their opposition to Obama’s socialist/communist/open immigration agenda.

For some reason (hmm), the Zionist press gave this quaint, growing amalgam of fairly numerous, small, regional Tea Party-associated coffee klatches some media play. Make no mistake, most of the Party members were and are sincere grassroots noisemakers.

Over the weeks, these often disparate little power centers eventually morphed into the “Tea Party Nation,” and (hmm) invited Ex-Gov Palin to be the keynote speaker at their “First National Tea Party Convention,” (as they billed it), in Nashville Tennessee, February 4-6, 2010.

For anyone even passively capable of remembering VP Candidate Sarah’s putrid declarations of fealty to Zion and Israel, the invitation to, and acceptance by, the one-time VP candidate should have stamped ‘Case Closed’ for the Tea Party movement then and there. 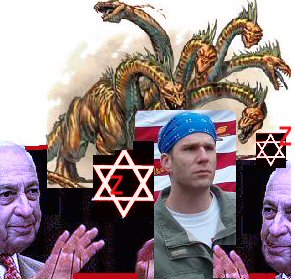 IT’S A SIMPLE FACT OF POLITICAL LIFE in America that NO viable, honest political movement shall be permitted to take ten healthy breaths before being probed thoroughly and then taken over by the Zionist political machine…which makes Dr. Frankenstein’s lab success look like Mother Theresa.

Zionism - like a political Hydra - has tentacles firmly and terminally thrust into every major power center in America. We can now add to that sorry roster, the Tea Party ‘phenomenon.’

In fact, it would not surprise this writer, if the Tea Party blip on the radar was CREATED by Zionists for a little weekend fun to siphon off and control the palpable, if not truly formidable, discontent growing among the remaining semi-conscious sheeple grazing from sea to shining sea.

In the alternate, however, if the Tea Party movement was/is a genuine spasm of political anger - with even a remote chance of causing trouble to the status (Star of David) quo - it was immediately targeted for total control and usurpation by the Zionist masters when it began to force the Jewish media to cover it. (Hence the suggestion that the Tea Party populist ‘opposition’ may have been born of Zionism chicanery and manipulation in the first place.)

Savor this: Listed on the Tea Party Nation’s own Internet Home Site as one of its leading “Resources,” is the malignant Zionist, Jewish Neocon think tank, “The American Enterprise Institute,” which pushed the US into the illegal War Of Genocide in Iraq (two million Iraqi dead) and is currently propagandizing and demanding the (US) annihilation of Iran…to protect ‘brave little Israel’ - our only ‘democratic friend’ in the Middle East.

Next up in the chain of evidence of Zionist control of the Tea Party Nation, one finds as its leading sponsor and “featured Convention speaker,” Mr. Joseph Farah, publisher of World Net Daily, a RABID Pro-Israel Internet news and propaganda service. 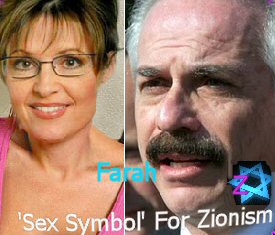 AN UNABASHED lover of the racist, murderous, outlaw Zionist state of Israel and arch defender of its ongoing genocide of what remains of Palestine and its people, Mr. Farah joined ’sweet’ Sarah on the national convention podium.

Palin, of course, has made it quite clear that ‘yesterday’ wouldn’t be too soon to obliterate 80 million Iranians (to feed the blood lust of Zion). Rupert Murdoch’s Fox News was also represented on the Tea Party rostrum in a joint speech with Mr. Farah - more below. Zionist money-hunter, Rep Michelle Bachman, was also on the scheduled speaker list.

In their enraptured, near-carnal throes of enthusiasm for Sarah’s old-time keynote rant, genuine Tea Party zealots failed to realize that Palin is owned lock, stock, panty and bra by the Zionist Power Bloc. (The underlying, overt and subliminal sexual aspects of the marketing of Palin are obvious.)

With Palin-enablers like Zionist Jews Rupert Murdoch, Jacob Rothschild, William Kristol, and Randy Scheunemann, the Tea Party patriots who tried to roll out a genuine populist renewal of ‘Americanism’ will, instead, be getting yet another onslaught of Zionist skullduggery and hardcore Jewish tribalism housed behind the square-rimmed designer glasses, People Mag fodder, politically ‘fresh’ malignantly Zionist ‘Christian’ soccer mom.

If the ‘celebrity’ ex-Governor hopes to be America’s next teleprompter reader-in-chief, Sarah must now tout Rupert’s Zionist line which she will find as difficult to do as slipping on a pair of L’eggs panty hose, or pulling the trigger on a telescopically-sighted, and already dead elk or whatever other fur-covered mammal she decides to ‘drop’ for ’sport.’ (Imagine the painted lips and the curled toes if this woman was allowed to give the order to ‘drop’ Iran.)

Murdoch, a full-fledged drooling Zionist, whose mother, Elizabeth Joy Greene, was the daughter of a wealthy Jewish family, (usually an oxymoron), brought his abiding interest and media spotlight to bear in full on Palin in mid-January 2010.

Fox News AND the Wall Street Journal, both owned by Murdoch’s News Corporation, featured Palin’s speech in a multiplicity of articles complete with a “splashy” WSJ Interactive Graphic Presentation on Palin. Most of America, of course, would have been happier with a photocopy of a TSA backscatter x-ray of the ex-Governor.

Just two weeks before her speech at the Tea Party ‘Convention’… Murdoch tabbed Palin as a Fox News “on-air contributor.”

If this was not enough, Rupert Murdoch bought, built, and installed, a TV studio in Palin’s home in Wasilla, Alaska, this past week so she could ‘contribute’ without the strain of transit to a local broadcast facility.

So, in sum, there is no argument, no question whatsoever, that big Zionist Murdoch money and influence now own Palin’s immediate and, perhaps, long-term future.

Sarah’s Zionist Jewish backers not only include rapacious Rupert and his News Corporation and well connected NY Jew, Arthur M. Siskind (Senior adviser to Murdoch), but none other than…drum roll…Jacob Rothschild, as well.

Follow this one: On the Board of Directors of Murdoch’s News Corporation, is one Andrew Knight, Chairman of J. Rothschild Capital Management Limited. (JRCML is a subsidiary of RIT Capital Partners whose Executive Director is “Lord” Jacob Rothschild.)

Murdoch has already appointed a start-up contingent of Zionist-Jewish advisers to guide, train, polish and manipulate Palin as she rolls down the tracks on the Zionist Express.

Palin Plays To The Jewish Lobby

“ISRAEL IS AMERICA’S CRITICAL ALLY,” declared ’sweet’ Sarah Palin from the podium to loud and dutiful applause at the Tea Party Nation’s convention last week. Yes, friends, there is only one ‘critical ally’ of the United States of America…and the Zionist state of Israel is it.

Sporting a pin on her lapel with two flags — for Israel and the United States — Palin spewed a carefully orchestrated script designed to please and make glow the Jewish lobbyists monitoring her every word. Palin gave them just what they wanted to hear: “It’s time for tough action against the dangerous regime of Iran.” (Translation: “Let’s nuke the Persian creeps and let ‘God’ sort them out.” Although I highly doubt Palin knows the difference between Persian and Arab).

Already vetted by AIPAC even before McCain ‘chose’ her as his running mate in July 2008, Palin made sure that her AIPAC pedigree is 100% secure when she told the Tea Party Convention audience, “Our President spent a year reaching out to hostile regimes and dangerous dictators. Now Israel, a proven friend, questions the strength of our support.”

Palin, knowing which side of the toast the yellow stuff goes on, then delivered a shoe-in for MILLIONS in Jewish campaign money in an interview with her media owner…er, sponsor, Fox News, only one day after her Tea Party speech: 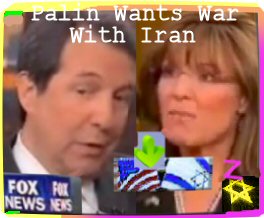 If it’s WAR that Palin wants, then she will have no trouble getting the WAR-MONGERING Jewish lobbies and their partners in the Jewish-owned media to scream for bloody, genocidal war with her.

One wonders if the bona fide, authentic, Tea Party patriot faithful actually know what has happened to their dreams and hopes. The coup is over…it’s game, set and match to the Zionists…the Tea Party is now just another kosher media circus.