Jewish Money-Lender Bernanke Should Be Fired 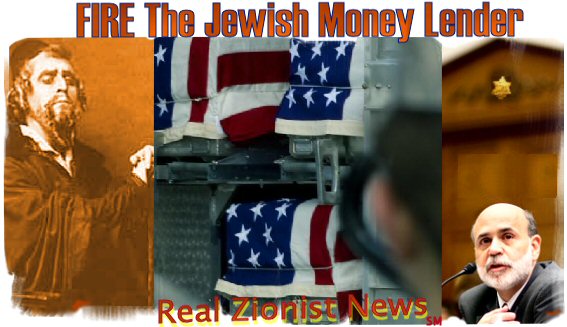 JEWISH MONEY-LENDER BERNANKE
SHOULD BE FIRED

“GET AHOLD OF FIFTY OF THE WEALTHIEST JEWISH FINANCIERS,” urged Henry Ford in his Dearborn Independent “and you will put an end to all wars.”

Ford’s warning was presaged by Rabbi Reichorn speaking at the funeral of Grand Rabbi Simeon Ben-Judah in 1869: “Thanks to the power of our International Banks we have forced Christians into countless wars. Our banks grow fat on Christian wars. Millions of Christians have been swept off the face of the earth by wars - and the end is not yet.”

And from the 20th Century German economist, Werner Sombert: “In the TALMUD you will find that the Jews made an art of lending money. They fathomed all the secrets that lay hidden in money. They became Lords of Money and Lords of the World.”

If any should ignore these quotes as being ‘Anti-Semitic,’ President Bill Clinton’s mentor, Professor Carroll Quigley, affirmed all of the above in his 1966 book Tragedy and Hope:

“A network of international financiers exists who have no aversion to cooperating with the Communists or any other groups to reach their aims. I know of the operations of this financial network because I have studied it for twenty years and was permitted in the early 1960s to examine its papers and secret records.” View All Quotes Here.

And now with Ben Shalom Bernanke, the chief Jewish money-lender (WITH INTEREST) of the Fed, appointed by Obama for a second term, the necks of Christian Americans are being squeezed into further deadly servitude by war-funding (WITH INTEREST) Jews. 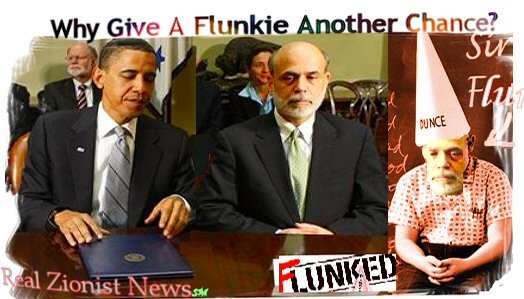 WHY BERNANKE SHOULD BE FIRED

“THE VERY PEOPLE WHO DEVISED THE POLICIES THAT PRODUCED THE MESS WE ARE NOW IN,” writes Thomas Woods in his best-seller, Meltdown, “are now posing as the wise public servants who will show us the way out.”

Any idiot will tell you that Ben Shalom Bernanke, the chief Jewish money-lender of the United States of America, is at the top of the list of high-finance Jews who got America into the current economic malaise in the first place.

Succeeding Alan Greenspan in 2006 after serving on the Board of Governors since 2002, Bernanke was in a position to know that a pending housing bubble explosion due to the Fed’s easy credit was about to burst upon America - as it indeed did in August of 2008.

When the “wise public servants,” that is, the world’s central bankers met last week in Jackson Hole, Wyoming, held August 20-21, Bernanke delivered to his fellow Jewish international bankers the opening address: Reflections On A Year Of Crisis.

Bernanke reflected in his speech that he had presided over a similar gathering a year ago at a time when the financial crisis was thought—at least by the international Jewish money lenders—to be relatively under control. “While there were signs of a slowdown,” Bernanke said, “there was little to suggest that the financial situation was about to take a sharp turn for the worse.” (Did Bernanke say this with a straight face?)

Yet for all of his education in monetary policy, Bernanke ignored the mainstream media’s warnings, reported as early as April of 2006, of rising housing prices conjoined with falling housing sales. A tell-tale sign that the housing bubble was about to burst was that rental properties did not follow the trend with its own rising prices, but remained stable.

If we were to grade Bernanke’s perfomance on a curve along with the performance of his fellow Jewish banksters, then Ben Shalom Bernanke would get at least a passing grade.

But if ordinary journalists warned us of a pending economic crisis as early as 2006, then by comparison, Bernanke flunked. Why should a flunkee be given another chance? (Because Obama is ruled by Jews, that’s why.)

THE DUNCE BERNANKE ALSO APPEARS to be a lying thief. He has refused to provide the public, or even the relevant congressional committees, with information on the trillions of dollars in loans that were made through the Fed’s special lending facilities.

As Dean Baker of The Guardian points out, the information we do have, is not encouraging. At the peak of the financial crisis in October of 2008, the Jewish bank, Goldman Sachs, converted itself from an investment bank into a bank holding company so that it could tap an FDIC loan guarantee programme.

Remarkably, Bernanke allowed Goldman Sachs to continue to act as an investment bank, taking highly speculative positions even after it had borrowed $28bn with the FDIC’s guarantee. View Dean Baker’s Article Here & Here.

How is it that only after six months since Goldman Sachs received a bailout from US taxpayers, Goldman’s CEO, the Jew, Lloyd Blankfein, announced a profit of $2 billion on April 14, 2008, one day before enslaved Gentiles paid their taxes? Does this not give us a hint where Bernanke’s secret $2 trillion went? (Synagogue buddies always take care of their own.)

If Ben Shalom Bernanke was in any other line of work, he would never be re-appointed. This would be like the captain of the Titanic asking for another command based on how quickly he swam to shore while everyone else drowned.

But in spite of the low standards upon which Jewish money-lenders base their actions before the ‘dumb goys,’ Bernanke and his fellow Jewish banksters always get their way…