Will The Hanukkah Menorah Toppling Start A Trend? 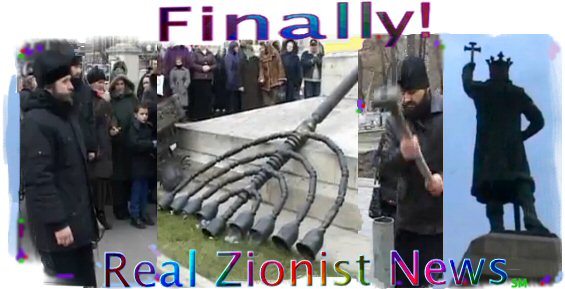 WILL THE HANUKKAH MENORAH TOPPLING
START A TREND? 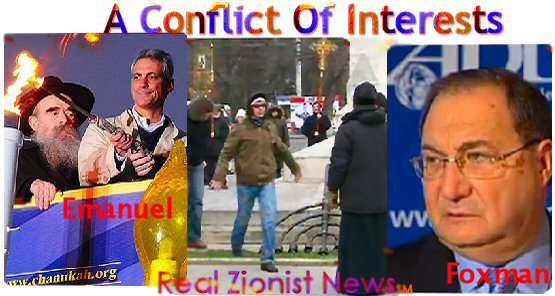 THE JOINING OF JEWRY’S CULTURAL & POLITICAL DOMINANCE IN AMERICA was recently highlighted in a national event held on the “Ellipse” of the White House south lawn on December 13, 2009.

The event, The Lighting Of The US National Menorah, was sponsored by the joint collaboration of The American Friends of Lubavitch and the Jewish-dominated Executive Branch of the United States of America. The US Air Force Band was on hand to offer a “trumpet salute” to the new national symbol.

With a yarmulke on his head, White House chief of staff, Rahm Emanuel, was the guest of honor at this year’s White House Hanukkah celebration. Ascending upon a cherry picker, (paid for by US tax payers), that lifted him up to light one of the candles on the 40-foot-tall US National Menorah, Emanuel stood with Rabbi Levi Shemtov to confer the executive branch’s affirmation of the Jewish holiday.

Jewry’s oft-asserted “separation of Church and State” was not shouted out by either the ADL or the ACLU in protest of this obvious mixing of religion and government.

What the Jews really have in mind when calling upon “Separation of Church and State” to protest any public expression of Christianity (not Judaism), is to establish the “Uniting of Synagogue and State” in America. 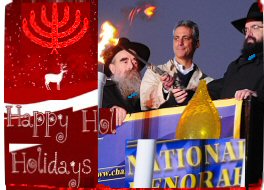 Now that Americans have become habituated to saying “Happy Holidays!” instead of “Merry Christmas!” — the Jews, after gaining equal time for their holiday, Hanukkah — have succeeded in TAKING OVER our once Christian season. In other words, give the Jews an inch and they will eventually TAKE IT ALL. (”Happy Holidays!” is a Jewish lie perpetrated in the 1960’s. Prior to that date there was only ONE HOLY DAY in December, and that was Christmas.)

Due to the Jewish-run-and-funded ACLU creating a Supreme Court legal precedent allowing “cultural symbols,” that is JEWISH SYMBOLS, as “constitutional cultural displays” - but Christian symbols, as “unconstitutional religious displays” - the Jews have seized rule over religious expression in the public square. Read ACLU Vs Allegheny County/ACLU Vs Mt Soledad Cross Here & Here.

Indeed, our new national “constitutional” holiday, the Jewish festival of Hanukkah, has replaced Christmas. Hanukkah has sadly become the “reason for the season.” 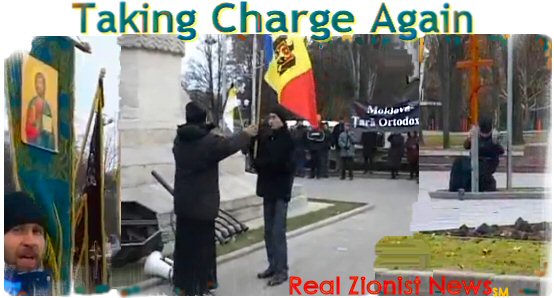 USING HAMMERS AND IRON BARS, Moldovan patriots smashed a Hanukkah menorah while police approvingly looked on in Moldova’s capital Chisinau on December 13, 2009, the same day the White House bowed before the anti-Christ image.

Led by an Orthodox Christian priest, identified as Fr. Anatoly Chirbik, the 100-strong patriotic demonstrators gathered at Stefan The Great Square where the giant menorah was erected next to the statue of Stefan the Great. The police said they tried without success to convince the Christians not to pull the Menorah out adding that they didn’t want to oppress the Christians.

Standing in front of the object of offense, Fr. Chirbik cried out: “We’re an Orthodox Christian country. Placing a Jewish symbol next to the statue of Stephen the Great is an offense. Stephan the Great defended our country from all kinds of Jews and now they come and put their menorah right in the middle of our square. This is sacrilege!”

THEN LIFTING THE MOLDOVAN FLAG and showing it to the TV cameras, Fr. Chirbik added, “The Cross here on our flag is our symbol. We will protect our nation with the holy Cross! No Jew will oppress us in our own nation!”

The patriots proceeded to uproot the menorah, replaced it with the Cross, and then dumped the menorah behind a statue of the Moldovan national hero King Stefan the Great. On hearing this news, Christians throughout the world felt a deep sense of relief in seeing brave Christian patriots having the guts to finally take action against Jewry’s cultural intrusion. View Entire Story & Videos Here, Here, & Here.

Abraham Foxman of the Anti Defamation League, of course, did not see it that way. Employing his typical demands on the “goyim,” ADL Director Foxman insisted on an immediate “punishment” of the Moldovan Christians by civil and church authorities:

“The Moldovan government must punish the perpetrators of this despicable anti-Semitic crime. The civil authorities must send a clear signal to the Jewish community that the government will not tolerate anti-Semitism.”

“By only calling the crime ‘a sad event,’ the Orthodox church falls far short of a vigorous condemnation. The church needs to punish any clergymen involved in organizing this demonstration.” View Entire Story Here.

WHAT ABRAHAM FOXMAN DOES NOT REALIZE, nor the Jews whom he represents, that there is a growing resentment in the hearts of many towards Jewry’s intrusion of their cultural heritage.

If it all boils down to a conflict of interests between Jews and Gentiles, a backlash by the dispossessed majority is surely in the makings…

And: Rahm Emanuel - A Mossad Spy In The White House Click Here