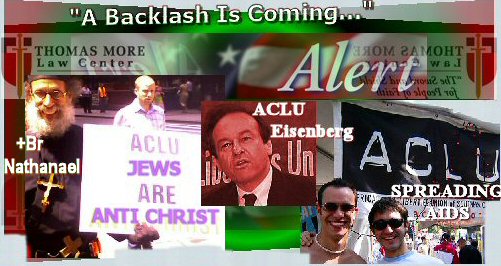 THE COMING BACKLASH AGAINST THE ACLU JEWS!
By Brother Nathanael Kapner, Copyright 2007-2012

Or Send Your Contribution To:
Brother Nathanael Kapner; PO Box 547; Priest River ID 83856
E-mail: bronathanael@yahoo.com
Q: You were in New York City in July 2007 to protest against the American Civil Liberties Union known as the ACLU. What was your protest about?


Br Nathanael: The ACLU, which is run and funded by Jews, is a Civil Rights Advocacy Group which has as its agenda the eradication of all expressions of Christianity in America.

I was spit at, cursed, and reported to the Police over six times by the ACLU Jews.

The last set of Police, who must have been paid off by the ACLU Jews, physically escorted me from the ACLU headquarters, claiming that my bicycle reflectors on my belt were explosives. When they realized how ridiculous this charge was, they then claimed that my sign was “hate speech.” But I waited 20 minutes and came right back.

Then one of the ACLU Jews threatened me saying, “Im going to beat you to a pulp you Anti Semite!” But how could I, a “racial” Jew be an “Anti Semite?”

Then one of them grabbed my sign out of my hands and ran away with it. But it was the end of the day and I had another sign made and came back early the next morning. (SEE Pictures of Br Nathanael’s Protest Here & Here)

Q: Why do you say that the ACLU is run by Jews?

Br Nathanael: I grew up as a Jew. In the 50’s and 60’s during the heat of the Civil Rights Movement, Jews from the political left joined the ACLU in droves. Gradually the Jews took over the leadership of the ACLU through Jewish financial sponsorship

First in command now at the ACLU is the Jewess Nadine Strossen, “President.” The ACLU Web Site boasts of Nadine Strossen’s Profile saying that she is the author of the book, Defending Pornography and that she made a guest appearance in a pornographic play called, The Vagina Monologues.

Fourth in command at the ACLU is the Jewess Geri E. Rozanski, “Director of Support.” Before joining the ACLU, Rozanski was an Executive with the Anti Christian Jewish Lobby, The American Jewish Committee.

What is particularly alarming is that the ACLU Office in Washington DC recently appointed a Jew and former FBI agent, Michael German, as “Policy Counsel on Immigration.” Michael German brings extensive intelligence experience to the Jewish ACLU’s Anti Christian activities in defending the entry-rights of Muslim immigrants, all potential abettors of terrorism.

Q: Isn’t the Hispanic, Anthony D. Romero, the Executive Director of the ACLU? How then is the ACLU run by Jews?

Br Nathanael: Ha ha. Anthony D. Romero is a homosexual pervert who is a “token” Hispanic in the ACLU Jewish entity. Romero has no financial attachments to his credit which accounts for being “of no consequence” in Jewish organizations like the ACLU.

Q: You mentioned above that the ACLU is funded by Jewish Organizations? Can you tell us which ones?

Br Nathanael: Two of the many Jewish financial backers of the ACLU are: 1) The American Jewish Committee; and 2) The International Association of Jewish Lawyers And Jurists, wherein many Jewish Lawyers from America are awarded monetary remunerations for litigating against Christian symbols.

Two leftist Jewish groups amongst many are also financial donors to the ACLU: 1) Steven Spielberg’s Righteous Persons Foundation; 2) The Norman Lear Family Foundation. The Jew Norman Lear, a former President of the ACLU in California, produced the Anti Christian All In The Family TV series which made the Moral Majority representatives, Archie Bunker and his wife Edith, look like idiots.

Q: Why do you say that the ACLU Jews are Anti Christ?

Br Nathanael: ACLU Jews are Anti Christ because they are relentless in litigating against public displays of Nativity Scenes, Crosses, Ten Commandment Monuments, and Christmas Trees throughout America.

The agenda of the ACLU Jews is to remove all semblance of Christianity in America by the year 2015. The ACLU Jews must be stopped before it’s too late.

Q: Do the ACLU Jews litigate against Jewish symbols and expression?

Br Nathanael: I have yet to see a headline that reads, The ACLU Sues Town For Putting Up A Jewish Menorah! Yet if the ACLU Jews learn of a Christmas Tree even remotely near a public area, they sharpen their fangs and start litigating against it. (For A List Of The ACLU Anti Christian Litigation Click: Here .

Q: But isn’t there the valid seperation of Church & State clause that is operative in the ACLU efforts to remove Christian symbols?

Br Nathanael: If I hear this phrase “separation of church and state” vomited out by these ACLU Jews one more time, may they all choke on it!

The ACLU Jews claim with their usual deception that they are not focusing on Christianity, but on religion in general. What a bunch of bull! For what is the religion that is dominant in our American culture? Hinduism? No, Christianity!

The misused phrase, “Separation of Church & State,” is neither in the American Constitution nor in any other codification of American laws. The phrase was only used by Thomas Jefferson in a letter to the Danbury Baptists of Rhode Island, assuring them that the Constitution will not allow the Federal Government to censure public expression of their Christian beliefs.

Q: Isn’t the ACLU doing our nation a service by keeping the State separated from religion?

The State will allow the homosexual perverts to put up a statue in Christopher Park in Greenwich Village of two men holding hands which I saw last month. But the State will not allow American Christians to put up a Christmas Tree. The ACLU Jews are to blame for this.

Q: But why would the ACLU Jews litigate against public displays of the Ten Commandments since this is part of their Jewish heritage?

Br Nathanael: The ACLU Jews do not believe in the God of the Bible. Nor do the ACLU Jews have any regard for the Prophet Moses who gave The Ten Commandments as well as laws prohibiting same-sex deviant behavior.

The ACLU Jews are secular leftists, who like most Jews, are focused on the primacy of their “racial” heritage. In sharing the Gospel with both secular and religious Jews, I constantly hear them say in response: “I was born a Jew and I will die a Jew!” What they really mean is, “I will never become a Christian like the Gentiles!” 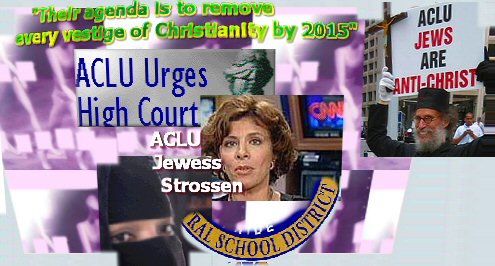 Q: Is there a growing antipathy in America against the ACLU Jews?

Q: Are you saying that there will be a backlash by Americans against the ACLU Jews?

Br Nathanael: Yes. There are now Christian Legal Groups such as The Thomas More Law Center @ http://www.thomasmore.org/ that are fighting the ACLU and informing the American Public of how the ACLU Jews are ruining our nation.

Unfortunately innocent Jews will suffer from the backlash that is building against the ACLU Jews. The same thing happened against the Jews in the Soviet Union who in the Bolshevik Uprising were the prime movers in destroying any Christian presence on Russian soil.

Then in pre-World War II Germany, the backlash came from those who resented the Jewish control of the media for promoting deviant sexuality - just as the ACLU Jews are now doing here in Christian America.

Where will the ACLU Jews go when the onslaught comes? Who will take them?

The Christian nation of America once offered asylum to the grandparents of the ungrateful ACLU Jews. But now the entire world will rise up against them. The uprising could easily spill over into Israel just to get rid of them all. What a tragedy this will be. And the ACLU Jews will be culpable!