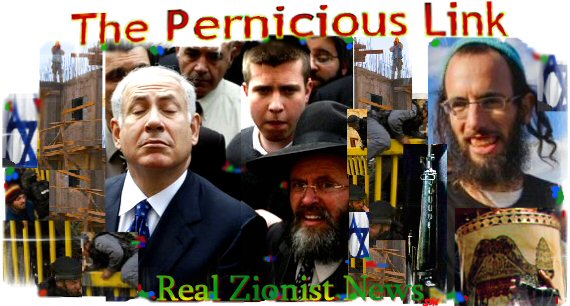 PRIOR TO THE FOUNDING OF THE JEWISH STATE OF ISRAEL IN 1948, and since the destruction of Jerusalem in the 2nd century, the Jews never had their own territorially-defined state like the peoples of Europe.

Throughout the centuries, Jewry’s religious community, as shaped by Talmudic Judaism, took on the role of a state by ensuring the preservation, propagation, and future of Jewry as a race. With respect to the peoples of Christendom, ensuring their preservation as a people of faith was primarily the function of the state in conjunction with the Church.

The rabbis, as the leaders of Judaism’s religious community, underscored a distinct difference between Jews and Gentiles with whom they lived in their various host nations.

This rabbinic-defined difference had as its underpinning a religious reaction: rejection of Jesus Christ as the Messiah of Whom the Gentiles had embraced. Upon this reaction, the rabbis built their case with the Talmud’s denigration of “non-Jews” as being “sub-human,” as “cattle.”

Since the founding of the Church in 33 AD and the subsequent dispersion of the Jews from Palestine, Judaism moved from being a positive belief system to being a reactionary religion in which the struggle for survival and hatred for non-Jews became its essential import.

Throughout the diaspora, which continues today despite the founding of the state of Israel, the rabbis taught that to embrace Christ and Christianity — “to assimilate” — “to go over to the other side” — meant the destruction of the Jewish people. After the coming of Christ, Judaism became based on the self-preservation of Jews as a race - ‘a superior race’ - with an emphasis against assimilation.

By creating a complex system of customs and rituals and malevolent attitudes towards Gentiles, the rabbis sought to preserve the Jewish people from assimilation. Judaism, formed by this Talmudic tautology, became essentially a religion of Jewish survival rather than a religion of belief.

The current state of Israel has as its primary political force, radical ‘religious’ Zionism, the settlers’ movement, whose ideology underlines the preservation of the Jewish people through an expansionist thrust into the occupied territories and beyond. This thrust has been named by them, “The Whole Land Of Israel Movement.”

Both the Likud Party and its agents in America, the powerful Jewish Lobby, are dedicated to the expansionist quest of the Israeli settlers. All politicians in America bow before this powerful political force, including the Zionist puppet, Barack Hussein Obama.

THE RISE OF RELIGIOUS ZIONISM

THE RELIGIOUS APPROACH TO ZIONISM became enshrined in synagogue prayers, expressing a yearning to return to the land of Israel from which Jewry had been exiled. These prayers are recited in synagogues wherever Jewry resides up to the present day.

Religious Zionism was specifically formulated by the Chief Rabbi of pre-state Israel, Rabbi Avraham Isaac Kook, arrogantly calling the state of Israel in 1920, “the foundation of God’s presence in the world.”

Kook viewed the establishment of the state of Israel as “God’s manifest hand” in the world bringing about the “redemption of the Jewish people” as a “light to the nations.” A fervent messianist, Kook believed that the emerging Jewish state would set the stage for the “coming of the messiah.” (He will be the Anti-Christ.)

And in an effort to reconcile secular Zionists with observant Jews, Kook stated that the secularists were doing God’s work in rebuilding the land. He exhorted religious Zionists to appreciate the role secularists played in redeeming the land and to help them realize that their outlook was not devoid of God.

Rabbi Kook’s son and successor, Rabbi Zvi Yehuda Kook, carried his father’s idea even further in advocating that Israel’s military decisions be made on the basis of an impending “messianic age.” Known for bringing the teachings of his father into the language of action, the political ideology of the latter Kook stressed the expansion of the Jews throughout the “whole land of Israel,” including the territories conquered in the Six Day War.

“The State of Israel is divine,” taught Kook. “Not only must there be no retreat from a single kilometer of the Land of Israel, God forbid, but on the contrary, we shall conquer and liberate more and more.”

It is this ideology, created by the latter Rabbi Kook and premised on the idea of a messianic advent, which spurred what today has become the main obstacle to peace, the settlement movement of the occupied territories.

RELIGIOUS ZIONISTS TOOK THE LEAD in settling Jerusalem and the West Bank immediately after the 1967 Arab-Israeli Six Day War.

East Jerusalem had a religious significance for these Talmudic Jews who viewed the “return” of the Temple Mount to Jewish sovereignty as a “sign” that the “messiah” was “at the door.”

The ultra-religious Land of Israel Movement, founded by Rabbi Moshe Levinger, emerged in 1967, which declared that devotion to the conquered lands and their settlement was equal in importance to ritual observance. Soon, the National Religious Party of Israel, joined forces with the settler movement, which became known as the Gush Emunim (Block of the Faithful) movement. 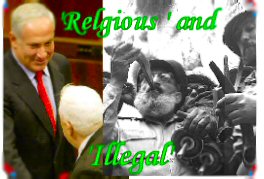 The rabbis of Gush Emunim spoke of the occupation of East Jerusalem, the West Bank, and the Gaza Strip, as a “miracle” initiating the “messianic process.” They renamed the “Six Day War,” the “War of Redemption” - so as to define the conquered lands as “holy” and never to be relinquished.

The National Religious Party added to their platform in 1993, a ruling “forbidding Jews to evacuate any settlement” and declared that Israeli soldiers should “disobey” any such evacuation orders. The Likud Party, the present regime under Netanyahu, recognized the Gush Emunim as an official settlement movement and promised huge funding for its settlement activities.

American Jewry then began to add special prayers for Israel in their support for the settlers and their movement. Referring to Israel in their prayers as, “Reishit Shmichat Geulateinu” (”Beginning of our Redemption”), in synagogues and religious gatherings, American Jews sought to underline the settlers’ view that the Jewish state had just as much religious value as it did culturally and politically.

Although Netanyahu called for a settlement “freeze” on November 25, 2009, it was designed only to “appease” the Zionist puppet Obama, who expressed “dismay” in early November regarding the on-going settlements in the occupied territories. Earlier in the year, Obama demanded a cessation of all settlements - a demand which Israel defied. Did Obama back down? Ha ha. Of course the Zionist puppet Obama backed down. 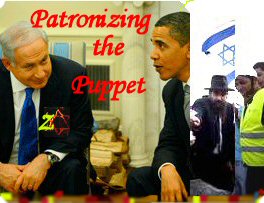 Netanyahu failed to tell Obama that his recent “freeze” applied only to new settlements on the West Bank, (for a 10 month period - while 3,000 homes under construction would be completed), and that settlements in East Jerusalem, such as the Gilo Project, would continue.

On December 3, 2009, Netanyahu met with “outraged” settlers, assuring them that the “freeze” was a “one-time only order” and that once the 10 month suspension had expired, the settlers could resume building. Calling the settlers, “our brothers,” Netanyahu defiantly asserted that even though Abbas should declare, “Peace now” — “we will begin building as we did before.”

Most American Jews find their identity linked with the state of Israel. Religious Zionism as a new political force has brought Jewish identity into a ’sacred’ realm. The ‘messiah,’ whom the religious Zionists await, will bring that identity to its tragic fruition.

This ‘messiah’ will be Jewry’s leader. He will be their god. He will be the Anti-Christ who will place his final “mark” on their arrogant, wicked, and most assuredly, doomed plight…