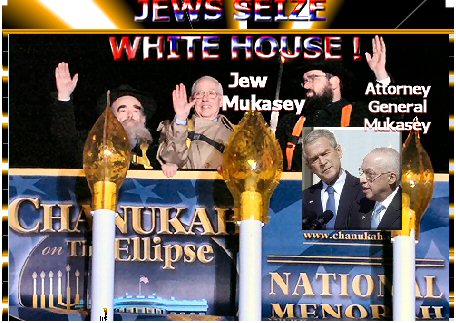 Or Send Your Contribution To:
Brother Nathanael Kapner; PO Box 547; Priest River ID 83856
E-mail: bronathanael@yahoo.com
JEWS ARE ALL OVER WASHINGTON THESE DAYS.


One begins to wonder if the Jews have not already taken over our once Christian nation. President Bush recently appointed the ultra-orthodox Jew, Michael Mukasey, as Attorney General. And what is one of Mukasey’s first acts as Bush’s newest cabinet member? The lighting of the Hanukah Menorah on the south lawn of the White House this past Tuesday December 4 2007!

The Christmas season is here but it seems more like a Jewish season with Hanukah Menorahs in your face everywhere you go. And this is what the Jewish-controlled media treated us with this past Tuesday — an in your face lighting of the Hanukah “National Menorah,” as it is now officially called, by the likes of our new Attorney General and his Anti-Christian Lubavitcher rabbi friends.

Mukasey subscribes to the Talmud and Kabbalah which looks upon “goys” as cattle to be slaughtered. Mukasey and his wife Susan are high profile Zionists who have supported the most extreme Likud Party candidates in Israel.

The candidates they wholeheartedly support include the past prime ministers, Ariel Sharon, Binyamin Netanyahu, Yitzhak Shamir, and Menachim Begin. All of these Likud politicians fostered hatred, theft, and murder towards Palestinians. Because of the racist policies of these extreme politicians, many Christian Palestinians have fled the Holy Land.

WHY AREN’T THE ACLU JEWS
CRYING “SEPARATION OF CHURCH & STATE?

WHERE WERE THE JEWS OF THE ACLU during this “religious” ceremony at the White House in which the Attorney General was the chief participator? What happened to their cry, “separation of church & state?” If this was a ceremony dedicating a Nativity Scene of the birth of Jesus Christ, the Jews of the ACLU would have been demanding a second crucifixion of Jesus Christ right on the White House lawn!

Here is what Michael Hoffman of Revisionist History has to say about Hanukah in America’s public life:

— “Hanukkah is a Talmudic holiday that is celebrated in the United States as competition for Christmas in order to symbolically assert the supremacy of the Judaic people over the rest of humanity.

During Christmas, 2006, I walked to Union Square in downtown San Francisco searching for a nativity scene depicting the Holy Family: Jesus, Mary and Joseph. What I found instead was an enormous menorah set up on Union Square by Chabad-Lubavitch, the rabbinic devil-worshipping sect who venerate the goddess Shekhinah.

The rabbis had their menorah but the Holy Family had nothing. This in a ‘Christian’ country ruled by a ‘Christian” president.’ What a hoax, like Hanukkah itself, which departs from the Biblical Apocrypha’s Book of Maccabees.” — 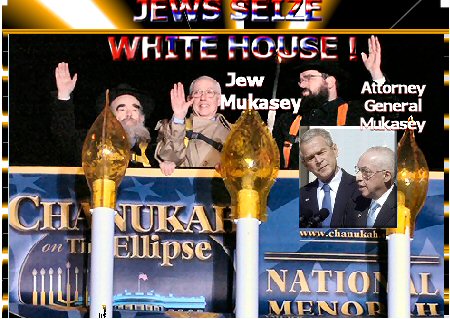 TIME IS RUNNING OUT

THE JEWS NOW RUN OUR NATION. Everywhere you go, like refuse, you step into them. Now we’ve got Hanukah in our faces all “holiday season” long. Hanukah is now our national holiday not Christmas.What can we do to stop these Anti Christmas Jews from becoming our slave-masters?

We must insist that the same standards apply to the Jews as they do to the Christians. If the Jews cry “foul” every time they see a Cross or a Nativity Scene, we must do the same every time we see the Hanukah Menorah in public areas.

Then we must tell the Jews that they must repent for crucifying the Lord Jesus Christ in their “hour and power of darkness,” as Christ Himself described their murder of Him. Do you not know everybody that this accusation based on historical fact drives the Jew to absolutely madness? Then we will finally see the true colors of the hateful, Anti Christ Jews now in power.