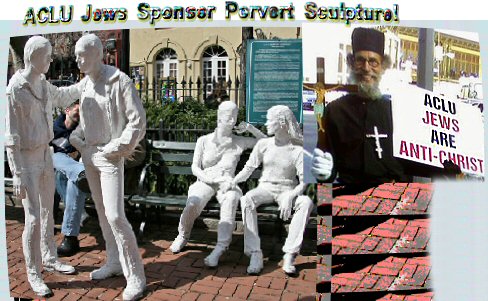 
While the Jews of the ACLU are working around the clock in every State to take down public monuments of Christian Crosses, Nativity Scenes, and Ten Commandment Monuments, many see this “Gay Rights Monument” sponsored by the ACLU Jews as the first of many to come throughout America.
SEE Homo-Lesbian Sculpture: Here.

I was in Greenwich Village last week on September 5 2007 and I saw this disgusting pervert “monument.” I took my Cross and made large slicing movements all over the homos and lesbians depicted in the abominable work in plaster. Then I yelled out, “Homosexuality & Lesbianism Is An Abomination!”

I just came back from NYC in conducting my 2nd protest against the ACLU Jews with my sign which read, “THE ALCU JEWS ARE ANTI CHRIST!” ( See Photo: Here)

Many came up to me saying they agreed with the sign. Others said to me, “Welcome back! It’s good to see you again!”

But the Jews were cursing me and threatening me with violence. One big Jewish man went into a rage and knocked me down from behind. But I kept my cool and continued with my protest, carrying my sign throughout Wall Street.

The Jews of the ACLU must be stopped. We must all speak out in protest of the jewification & de-Christianizing of America before it is too late!

I need your financial help. If you feel so led to help me to continue going back to Wall Street in front of the ACLU headquarters, please send a check to: