The Rise Of The US Surveillance State & The Jews Behind It

THE RISE OF THE US SURVEILLANCE STATE &
THE JEWS BEHIND IT

CENTRALIZING POWER INTO THE EXECUTIVE BRANCH is yet another ploy of the powerful Zionist-Jewish network in America to consolidate their influence-peddling into a single power bloc. 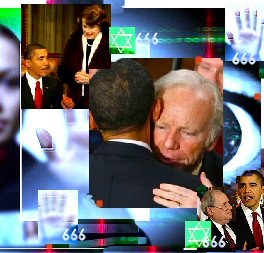 The Jew-bought President Obama in his approach to National Security Agency surveillance, CIA renditions, drone assassinations, and military detention, has embraced the expanded executive powers championed by his predecessor, George W Bush and his Zionist-Jew enablers.

We should not be surprised then, when, in the midst of our fabricated “crisis society,” advanced surveillance methods developed in our recent wars migrate from Baghdad, Kandahar, and Tel Aviv to our own neighborhoods - ALL by Executive order with Congressional (a record number of Jews are now in Congress) approval.

US wars abroad have been living laboratories for the undermining of a free society at home, a process which has brought covert Counter-intelligence penetration to the homeland.

And Zionist Jews, both on Capitol Hill, the White House, US government agencies, and the myriads of Jewish organizations & lobbies, are plotting the destruction of our once free society and the throttling of the dissenting voice of White Gentile Americans through their beloved Jew-created agency, the US Department of Homeland Security (DHS) with its security technology imported from US wars abroad.

THE JEWS BEHIND HOMELAND SECURITY SPYING

US HOMELAND SECURITY LAUNCHED its most frightening spy maneuver in the discharge of Predator-B drones to patrol the North Dakota-Manitoba border that Congressional leaders, (the same ones who disavowed the recent Goldstone Report on Israeli war crimes), called America’s “weakest link.”

US border official, Michael Kostelnik, when describing “future drone operations” during the launching ceremonies, said that in these “dangerous times it’s more important than ever for both countries to know who and what is crossing the border.”

But who launches a $10 million drone to watch out for cows crossing the America-Canada border? The Jew-inspired US Homeland Security spy-on-you apparatus that’s who. See Future Drone Operations Here.

In conjunction with the US Justice Department in 2002, Homeland Security, led by the Talmudic Jew, Michael Chertoff, launched Operation TIPS (Terrorism Information and Prevention System) which planned for millions of postal employees, American truckers, letter carriers, train conductors, ship captains, utility employees and others to aid the government by spying on their fellow Americans. 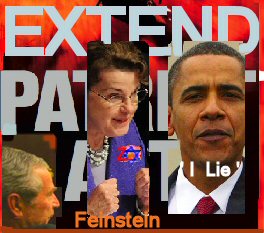 The key sponsor of the Bill, is, of course, a Zionist Jew — Senator Dianne Feinstein — a member of the House Judiciary Committee and the Chairman of the Senate Intelligence Committee. (How did a Zionist Jew whose loyalties are to her own tribe NOT Americans become Chairman?)

The Bill allows for greater freedom of “government roving wiretaps to monitor suspects who may switch cell phone numbers” and to track “lone wolves” who “act on behalf of foreign powers.” (Jews like Lieberman, Levin, and Feinstein, are the “wolves” who act “on behalf of a foreign power” known as the State of Israel.) And, of course, Obama, pathological liar that he is, who promised to abolish the Patriot Act, supports the Jew-inspired Bill.

IN A BID TO SEIZE CONTROL OF THE INTERNET, the freedom-hating Jew, Congressional Representative Jane Harman introduced with full support of Abraham Foxman of the Anti Defamation League, a Zionist “thought crime” legislation known as the Violent Radicalization and Homegrown Terrorism Prevention Act.

The ACT proposed a national commission (made up of Jews of course) to “combat the threat posed by homegrown terrorists.” The Bill passed the House by an overwhelming 404 to 6 vote before stalling, and then dying, in a Senate slightly more mindful of civil liberties.

Harman’s legislation focused on “cyber security,” that is, Zionist control of the Internet, our last bastion of free speech, stating in the Bill in typical Zionist lying fashion:

“The Internet has aided in facilitating violent radicalization, ideologically based violence, and the homegrown terrorism process in the US by providing access to broad and constant streams of terrorist-related propaganda to American citizens.” View Harman’s Bill Here.

SENATOR JOSEPH LIEBERMAN announced his plans on October 30, 2009 for a “cyber security czar” to operate out of the White House in co-ordination with Homeland Security which Lieberman chairs. Lieberman’s agenda will give Zionists control of the Internet by manipulating with their billions of Jewish dollars only “one” White House “czar,” rather than numerous department heads. The following captures the essence of Lieberman’s plans:

“We need to establish a Cyber Security Coordinator within the Executive Office of the President. This position would have the authority to monitor civilian networks. Currently, Homeland Security has this responsibility by Executive Order but it lacks the direct cooperation from the White House to succeed.” View Entire Story Here.

Lieberman is acting in concert with the pending Cybersecurity Bill S. 773 which will give Obama “emergency powers” to control the Internet. The Bill grants Obama the authority to shut down all online traffic by taking control of private networks in the event of a “Cyber-Emergency.” The problem is, a “Cyber-Emergency” is not defined.

Zionist Jews fear the Internet. Why? Because it is the only venue that exposes their lies, their agendas, and their quest for world domination. They MUST be stopped!