JEWRY HAS BEEN WAGING A RELENTLESS WAR on White America ever since its first large scale wave of immigration to America from Eastern Europe and Russia beginning in 1880.

The first attack on White America, (perceived by the Jews as a power bloc that would oppose their lust for power and control), took place in the public school system at the turn of the 20th Century.

Through their increased centers of Jewish organizations such as the American Jewish Committee with their first meeting in New York City in 1906 to demand “rights for Jews” (rights were never denied to Jews) and which divided America into 12 Jewish districts - along with Jewry’s economic rise within White America seeking to “strengthen Judaism against its Christian competitors in the marketplace,” Jewry took up arms against traditional White cultural expressions such as Bible readings, prayer, singing of Christmas Carols, and the celebration of Christmas and Easter in America’s schools.

This attack by the Jews on public Christian expression was first outlined by Henry Ford in his book, The International Jew - The World’s Foremost Problem, published in 1921. Ford and others after him such as Professor Kevin MacDonald have pointed out that it was the American Jewish Committee which first vigorously advocated for open immigration in America beginning in 1914 until the great watershed in 1965 with the Open Immigration Law of 1965, trumpeted, advanced, and implemented through Jewish influence in US Congress. 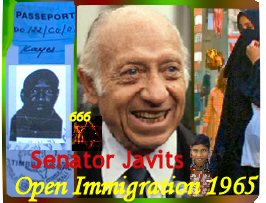 Ford wrote in 1921 as a warning to America regarding Jewry’s mission to diminish the Euro-White presence in the US: “The energies of the Jewish powers are concentrated on the task of preventing America from changing the immigration laws in a manner to protect the country from undesirable aliens.”

Prof. Kevin MacDonald wrote in 2002: “The primary objective of Jewish political activity is to create a Jewish safety-net in a society acceptant of a wide range of attitudes and behaviors, as well as a diversity of religious and ethnic groups.”

Open immigration as foisted on Americans by the Jews has now come home to roost in every major city in the US, turning our once White American cities into Third World scenarios. “Diversity Is Our Strength!” proclaim the Jews in their closed neighborhoods. But in fact, “Diversity Is Jewry’s Strength!” - subverting and weakening the only power bloc that could ever oppose Jewry’s lust for power - White Christian America. For it is in a racially diverse environment that Jews can rule over their White Christian hosts.

WHILE EVEN JEWS ADMIT that Hollywood is run by wealthy Jewish movie moguls and their sycophant Jewish actors and script writers, the entertainment of Americans is focused on undermining the confidence of traditional white Western man.

Indeed, Hollywood is the vanguard of the anti-white movement, and several of this year’s movies are proof. One movie in particular, District 9, a story about human discrimination against peace-loving aliens who have come to Earth as refugees, is a telling illustration of Hollywood’s perpetual attack on ‘whitey.’ In District 9, the aliens land in Johannesburg and are forced to live in a filthy shanty town, segregated from human society. The Apartheid metaphor is obvious.

Closed-minded humans, that is, ‘whites’ appear on the screen saying things such as, “Non-humans don’t belong here,” and, “We are spending too much money to keep them here,” all interspersed with black South Africans to suggest that THEY are the non-humans whom the ‘bigoted’ whites discriminate against. The Jew, Robin Williams, an American “hero,” has a lead role in the movie’s promo. Director-Script Writer, Neill Blomkamp, admits that due to black street violence, he and his Afrikaner family fled Johannesburg for Vancouver in 1997 when Blomkamp was in his teens. Hollywood’s hypocrisy is shameless. 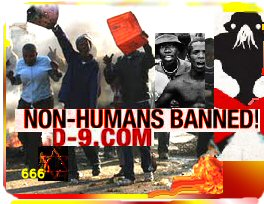 On Jewish-owned Sony Pictures’ District 9 Website, regulations are listed for “non-humans” who must live in a special area called District 9—from which the movie’s name is taken—and work mostly in mines. The rules listed for them include identification tags to be worn at all times, designated restroom facilities in public places, forbidding sexual relationships between humans and non-humans, and denial of using public drinking fountains. View Sony Pictures’ Jewish CEO Here.

Sony’s promo also contains a ‘public safety message’ as if released by an Apartheid government. The video implores viewers to contact the authorities by an 800 number if they see any non-humans escaping from District 9. The video concludes with a picture of a wholesome-looking white family with the caption, “Keeping humans safe by keeping non-humans separate.”

The purpose of the Jew-inspired movie, of course, is to mock whites who oppose multiculturalism. The refugee aliens are a metaphor for Third World immigrants living in America and Europe. ‘Humans,’ that is, whites, are shown to be xenophobic nativists with bigoted attitudes towards ‘non humans,’ that is, blacks. View Entire Story Here & Here.

FOR THE SECOND TIME THIS YEAR, fifty Jewish leaders of the Jewish Federations of North America (there are literally THOUSANDS of Jewish organizations EVERYWHERE) met with President Obama at the White House on November 9, 2009 to discuss “Jewish concerns.” (America has become a FOCUSED VENUE for JEWISH CONCERNS.)

William Daroff, Director of The Jewish Federations of North America’s Washington office, said that the group discussed “issues of concern to the Jewish community including social services, (more handouts to Jewish charities as Obama allotted in his Stimulus Plan); foreign policy (giving Israel settlers free reign); and the recession” (keeping the incensed White Goyim at bay.)

Jerry Silverman, President and CEO of The Jewish Federations of North America, told the press after the meeting: “We were thankful to have an opportunity to discuss a number of our concerns with the administration’s senior team and look forward to continuing to reach out to them in the future to ensure the voice of the Jewish community is heard loud and far in Washington.” View Entire Story Here & Here. 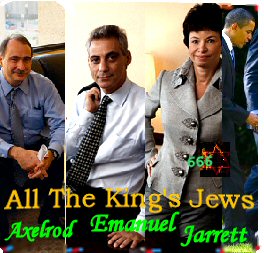 The voice of Jewry being heard “loud and far” in Washington has been on “instant replay” ever since Obama became President in January of 2009.

Again, on July 13, 2009, Obama met with 16 leaders of 14 major US Jewish groups which included the Israel advocacy lobbies, AIPAC and J-Street.

As noted by the Jewish-controlled press, “There is a longstanding tradition of presidents meeting with Jewish leaders who are members of the Conference of Presidents of American Jewish Organizations.” (This is now a “tradition” in America - Jews presiding over presidential affairs.)

Ratcheting up the pressure on Obama to maintain a domestic policy of “continual crisis” regarding Jewish issues, Ira Forman, Director of the National Jewish Democratic Council and Nathan Diament of the Orthodox Union, stated: “We warned the president of incitements, violence, and commitments on accepting the reality of Israel” (they mean the “reality” of Jewry’s power in America). And, of course, Obama’s Jews, Emanuel and Axelrod, were present in discussing “other issues of Jewish concern.” View Entire Story Here & Here. 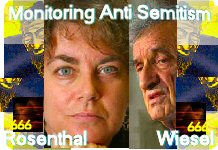 ALL MATTERS JEWISH IS NOW America’s focus. As we witness the extinction of the White race, more immigration into America from the Third World, and Hollywood’s insults of White culture, we now have a special envoy to “monitor Anti Semitism in America.” This envoy is a veteran of Jewish lobbying, the former head of the Jewish Council for Public Affairs, Hannah Rosenthal.

But will there ever be a “special envoy” to combat “Anti White-ism” in America? Not on your life. Jews own domestic policy in America and White Americans are their target to subvert, diminish, and destroy. The Anti Christ is on his way…

And: The Anti Christ Will Be A Jew Click Here