Why Obama’s Health Care Plan Can Kill You 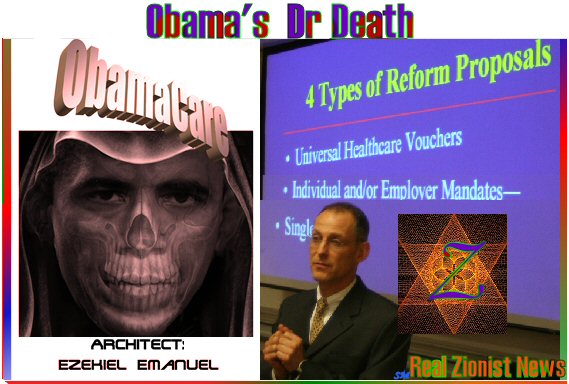 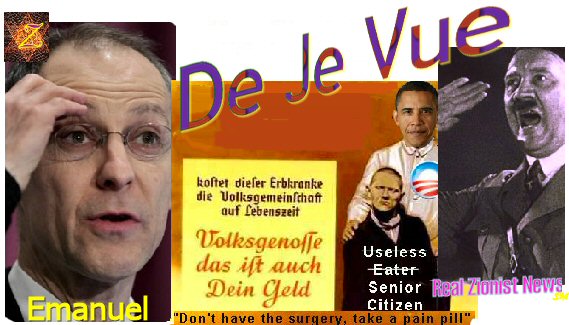 ‘DEADLY DOCTORS’ AS POLITICAL APPOINTEES will decide whether we live or die in Obama’s pending health care plan.

One of these political appointees deciding our fate would be Obama’s top medical adviser, the Zionist Jew, Dr Ezekiel Emanuel. Not one to begrudge himself of participation in nepotism, Emanuel just happens to be the brother of White House Chief of Staff, Rahm Emanuel, who along with Ezekiel, is a dual-citizen of Israel and the US. The brothers Emanuel have as their father, Benjamin Emanuel, a former Israeli terrorist with the Irgun.

Claiming to be made of “tougher stuff” then ordinary mortals, Dr Emanuel, the chief architect of ObamaCare, now pending in Congress as HR 3200, wants to ration our health care before the arbitration of an elite group of Obama’s death panel bureaucrats, between the worthy and the unworthy. 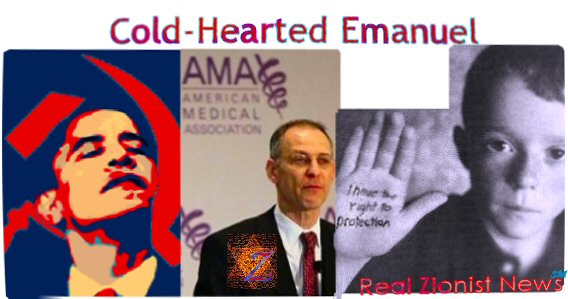 AND WHO ARE THE UNWORTHY according to this Zionist Jew Emanuel whose loyalties are to Israel first and his own kind? Senior citizens, the disabled, those with Alzheimer’s disease, pre-school children, those with Down syndrome, the mentally retarded, and those, (in Emanuel’s own words in his Hastings Report), “who are prevented from being or becoming participating citizens.” Sounds like Hitler’s Germany does it not?

Indeed, in Emanuel’s OWN ZIONIST-JEWISH WORDS, in his Hastings Center Report, he clarifies his stance of denying government-funded health care to those with Alzheimer’s disease by adding, “An obvious example is not guaranteeing health services to patients with dementia.” View Full Quote Here.

No wonder Obama is in such a rush to get his Health Care Reform Bill rammed through Congress before the August recess. And before the public finds out about the ‘deadly doctor,’ Ezekiel Emanuel, who is also special adviser to his fellow Zionist Jew, Peter Orzag - Obama’s director of the Office of Management and Budget. Indeed, Zionist Jews who have so much money that government-funded health care is not needed by them, are out to deny the rest of us what they have no use for. 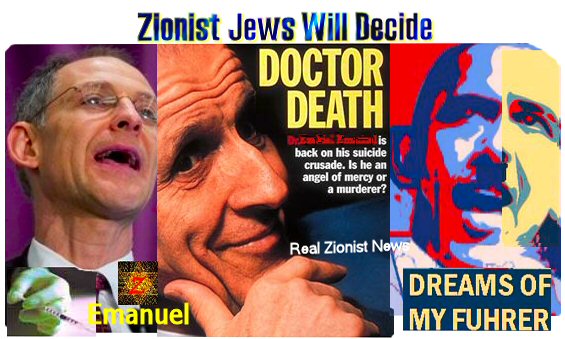 DR EMANUEL’S ‘A TIME TO DIE’

FORESHADOWING A PLAN FOR EUTHANASIA, Dr Ezekiel Emanuel, (chief architect of ObamaCare/HR 3200), wrote a review in 2000 for the Journal of Health Politics and Law, of a book entitled, A Time to Die: The Place for Physician Assistance.

After quoting the author’s introduction: “This book is about physician-assisted dying, which I think is both desirable and inevitable,” Emanuel concludes that “social policy should keep physician-assisted suicide and euthanasia illegal but should recognize exceptions.”

And thus we find in Section 1233 of the Emanuel-drafted Health Care Reform Bill, HR 3200, the “death with dignity” clause aka euthanasia through consultations every five years for senior citizens. In other words, WEALTHY Zionist Jews like Emanuel who will have all the care they need lavished on them in their old age, are eager to convince the Gentile-elderly to just get out of their way. View Entire Story Here & Here.

Apart from being granted (or forced) to undergo physician-assisted suicide vis-a-vis Emanuel’s “exceptions,” medical needs such as organ transplants, vaccinations, and even MRIs, CTs and other advanced technology scans that often are critical to identifying life-threatening diseases are part of Emanuel’s Zionist rationing plan. 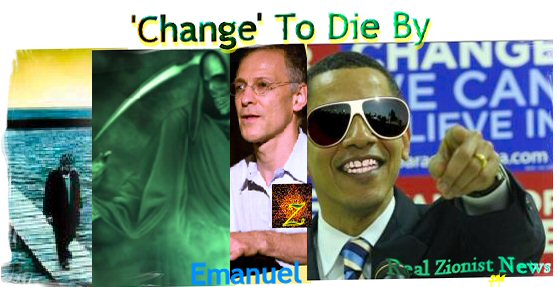 IN AN ARTICLE that Ezekiel Emanuel co-authored that appeared in the January 31, 2009 edition of the British medical journal, The Lancet, Ezekiel stated that “medical interventions such as organs and vaccines is a persistent ethical challenge when deciding on allocations.”

In addition, HR 3200 includes a provision to severely limit what Medicare pays for CT and MRI scans performed in doctors’ offices. This would force elderly patients to go to the hospital for their radiology — where there are often lengthy waits and endless red-tape for walk-in patients.

And patients in rural areas who must travel long distances to get to hospital-based testing facilities will be discouraged from getting the tests done at all. Restrictions on medical scans, now in force in England, have resulted in the deaths of over 25,000 cancer patients, according to the World Health Organization. View Goodman’s Health Policy Blog Here.

Is it any wonder then that Dr Ezekiel Emanuel, Zionist Jew and dual-citizen, who said that “doctors take the Hippocratic Oath too seriously,” is now being labelled as Dr Death?