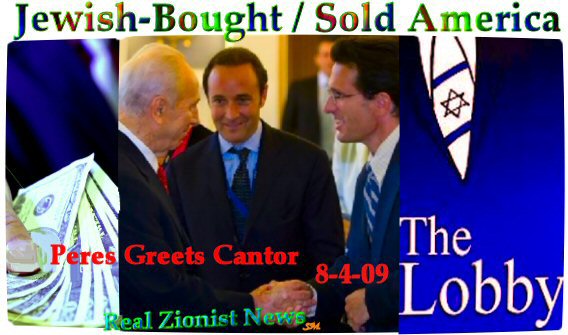 A DELEGATION OF 25 JEWISH-BOUGHT CONGRESSMEN assured Israeli President Shimon Peres of “strong congressional backing” for the Jewish state of Israel on August 4, 2009.

Led by the Zionist Jew and Republican Whip, Eric Cantor, the delegation’s visit comes out of “concern” that “too much pressure” is now being placed on Israel by the Obama administration. (Actually, the Jewish Lobby PAID for the trip. AIPAC President, David Victor, is between Peres and Cantor in the first picture above.)

Cantor, who wishes to bring even more US DOLLARS to the rogue state of Israel while American Gentiles continue to lose their jobs, could not bend low enough to kiss the buttocks of Shimon Peres in his address to him:

“To a person, all of us will tell you Mr President that we are here, first and foremost, to reconfirm the message that the US Congress stands staunchly on the side of Israel and its struggle. We are here in Israel to figure out how to strengthen the US-Israel relationship.” View Entire Story Here & Here.

But this was not enough for the Jew-agenda-serving Cantor in his obsequious adoration of Shimon Peres who told the visiting Congressmen that “Iran must be stopped.”

Picking up the cue from Peres in an obviously staged meeting, Cantor then assured Peres that the settlements by the Jews was not the issue, that he was “disturbed” by Obama’s criticism of the eviction of two Arab families from an East Jerusalem neighborhood, that Obama is “wrong” to demand the cessation of Jewish settlements — but rather — the threat from Iran is what really matters:

“We are concerned about the focus being placed on settlement growth when the real issue is the existential threat that Israel faces from Iran. We do not support the decision by the Obama administration to engage with the terrorist regime in Tehran.” View Entire Story Here & Here.

Then during the delegation’s visit to the illegal Jewish settlement of Alfe Menashe, the Zionist Jew Cantor accompanied by his fellow American traitors, affirmed Israel’s refusal to return the land stolen from the Palestinians in their 1967 war of aggression:

“The insistence that Israel return lands it has occupied since the Six-Day war and accept a right of return of Palestinians who fled their homes in what is now Israel is just like saying you don’t accept the historical right of Israel to exist.” View Entire Story Here.

Not to be outdone by Cantor’s Jewish-buttocks kissing, House Democratic Majority Leader Steny Hoyer (yet another Zionist Jew in power as there is now a RECORD NUMBER OF JEWS in Congress) will follow Cantor later in the month with a delegation of 35 Democrats and even more fawning over self-serving Jews. 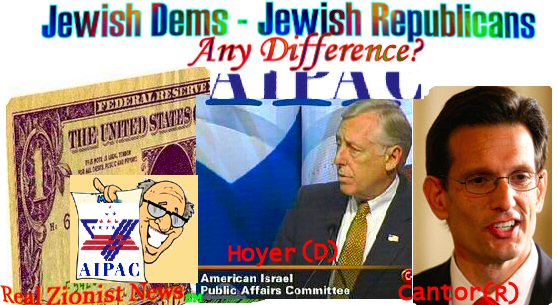 US CONGRESS UNDERWRITTEN BY JEWS

“WHO UNDERWRITES THE CONGRESSIONAL TRIPS TO ISRAEL?” many concerned Americans are now asking. The powerful, BILLION DOLLAR JEWISH LOBBY in America, that’s who.

Cantor’s and Hoyer’s trips are underwritten by the American Israel Education Foundation, yet another Jewish lobby organization affiliated with the powerful American Israel Public Affairs Committee. The Foundation is the vehicle that AIPAC and Congress members use to organize and fund their junkets to Israel.

And since every Jewish organization (and there are THOUSANDS of them) are affiliated with each other and work to the same end of TOTAL CONTROL of the Gentiles, it should come as no surprise that Jimmy Carter recently said that any Congressman opposing the Israel Lobby commits “political suicide” and will never be re-elected. Read Carter’s Interview Here.

Indeed, as political analyst James Petras points out, even Jewish ‘religious’ organizations serve as conduits of Zionist propaganda through direct intervention in US politics at all levels even though non-profit organizations are forbidden by US law to engage in political activities. (But the Jews OWN America and always act with impunity.) 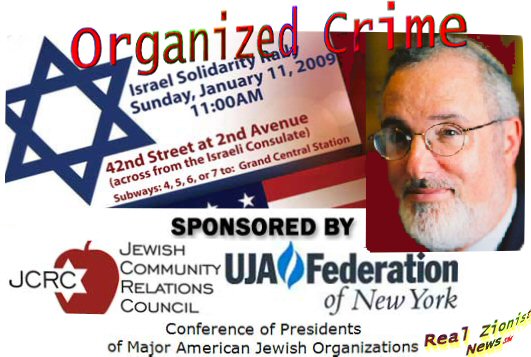 A MEMO FROM ONE JEWISH GROUP, The United Synagogue of Conservative Judaism, outlines their strategy in defense of Israel’s Gaza massacre: “Every congregation should issue a statement supporting Israel. Solicit statements from elected officials at the city, state or provincial, or federal levels. Monitor and respond to media coverage. Enlist public officials to demonstrate their support for Israel.”

The strategy paper highlights the way in which a highly organized, well-financed minority multiplies its power far beyond its own membership, ‘leveraging’ influential Gentiles, the mass media at all levels and public figures into a powerful juggernaut in defense of Israeli genocide in Gaza today and for war against Iran tomorrow. View Entire Petras Article Here.

COME NOW MY FRIENDS and VIEW THE NAMES HERE of all of the JEWISH-BOUGHT Congressmen who have had lavished on them MILLIONS OF JEWISH DOLLARS by the American Israel Education Foundation.

Is it any wonder then that US Congressmen care only about PLEASING THE JEWS and not the American people?