How The Jewish Lobby Works

HOW THE JEWISH LOBBY WORKS
By Brother Nathanael Kapner, Copyright 2008-2011

Sources: Jewish Power: Inside the Jewish Establishment, J.J. Goldberg; The Modern Jewish Experience, Dr. Jack Wertheimer; The Israel Lobby and US Foreign Policy, Mearscheimer & Walt
NO LOBBY IS FEARED MORE or catered to by politicians than the Jewish Lobby.

If a politician does not play ball with the Jewish Lobby, he will not get elected, or re-elected, and he will either be smeared or ignored by the Jewish-owned major media.

All Jewish lobbies and organizations are interconnected and there are hundreds upon hundreds of them. The leaders of the numerous Jewish Lobby Groups go to the same synagogues, country clubs, and share the same Jewish investment bankers. And this inter-connectedness extends to the Jews who run the Federal Reserve Bank, US Homeland Security, and the US State Department.

In other words, “Jews stick together.” Americans must know how extremely powerful the Jewish Lobby is and how it operates to undermine America’s interests both at home and abroad. At home - by corrupting America’s political system, and abroad - by dictating American Foreign Policy against America’s best interests.

Here is a list of the major Jewish Lobby Groups & how they work:

American Israel Public Affairs Committee (AIPAC): AIPAC has a staff of over 150 employees and an annual budget of over $60 million Here derived from private contributions from wealthy Jews and Jewish-owned businesses. In other words, “money corrupts & Jewish money corrupts the American political system absolutely.”

AIPAC has many “PACS” attached to their Lobby. PACS are “Public Action Committees,” sanctioned by Federal Law, that give huge donations to political candidates. PACS are the means by which AIPAC and all Jewish lobbies utilize the immense wealth of Jewry to bribe US politicians. AIPAC is currently lobbying for the US to attack Iran Here & Here. AIPAC’s Executive Director is the powerful Anti-Christian Jew, Howard Kohr.

American Jewish Congress (AJC): Its antecedents began in 1918 when Woodrow Wilson’s “influential friends,” Rabbi Stephen Wise, (founder of AJC in 1930), and Judge Louis Brandeis, (co-founder), participated Here in the drafting of the infamous Versailles Treaty of 1919 which made unreasonable demands on Germany.

– In the 1930’s, the AJC led a major boycott of German goods in America, which, among other provocations of the Jews, prompted a backlash against the Jews in Germany Here.

– Currently, the AJC works with pandering Congressman and “bought” Senators like Senator Jeff Bingaman to push through Bills with Zionist agendas Here. The AJC also has many “PACS.” AJC’s Executive Director is the powerful Anti-Christian Jew, Neil B. Goldstein.

Conference of Presidents of Major American Jewish Organizations: 51 of the largest Jewish organizations come together regularly Here under the umbrella group of the Conference. Their Mission Statement reads, “Forging diverse groups [there is no such as “diverse” in Jewry] into a unified force to foster the special US-Israel relationship” Here. The Conference also has many “PACS.” The Conferences’ Executive Chairman is the powerful Anti-Christian Jew, Malcolm I. Hoenlein.

Jewish Institute for National Security Affairs (JINSA): Founded in 1976 by Jewish neocons Richard Perle & Eliot Abrams. Its mission is to promote US aid to Israel with military hardware Here & Here. JINSA has its Jewish tentacles everywhere including the US Department of Defense Here.

– JINSA has a formidable array of Washington power players on its rolls. Prior to Bush’s Presidency, JINSA’s Board of Advisers included Dick Cheney, Elliot Abrams (now the Deputy National Security Advisor for Global Democracy Strategy), John Bolton (now Under Secretary of State for Arms Control) and Douglas Feith, who was Bush’s third-highest-ranking executive in the Pentagon. Cheney, Abrams, and Bolton are still in power having as their well-connected supporters, the Jews of JINSA.

Middle East Forum (MEF): It’s Mission Statement Here reads, “The Middle East Forum seeks to promote American interests in the Middle East. We define U.S. interests to include fighting radical Islam whether terroristic or lawful [dropping US cluster bombs on Arab children in Gaza Strip & shutting off fuel and water supplies to the Gazans]; working for Palestinian acceptance of Israel; [ethnic cleansing of Palestinians until only 1 Palestinian is left to “accept” Israel]; and countering the Iranian threat [bribing US politicians to declare war on Iran].”

Zionist Organization Of America (ZOA): Founded in 1897 to promote political Zionism. Currently the ZOA has over 30,000 members in every major US city Here.

The ZOA boasts on its Web Site:

— “The ZOA has played a key role in Congress [bribes] regarding victims of terrorism [Jews only/Jews are rarely “innocent victims”]; keeping Jerusalem unified under Israeli sovereignty [illegal settlements in the West Bank]; fighting Hamas and Fatah [US-made cluster bombs dropped on Arab children in Gaza Strip]; and working on the imposition of sanctions on Syria and Saudi Arabia [and the illegal invasion of Iraq where not a single Jewish soldier from America has died!].” — 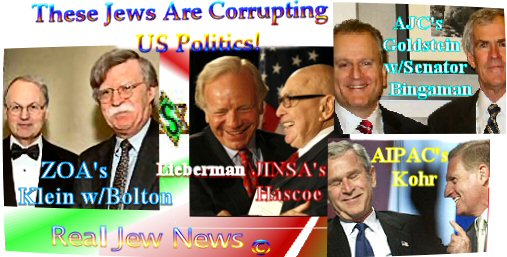 HOW CAN WE STOP THE JEWISH LOBBY?

2) Write to your Senator warning him that taking bribes from Jews is a sin.


OR:
+ Pray To The Lord Jesus Christ To Either Convert The Jews Or Conquer Them Through The Power Of His Cross!

And: “Jews Run The US State Department” Click Here