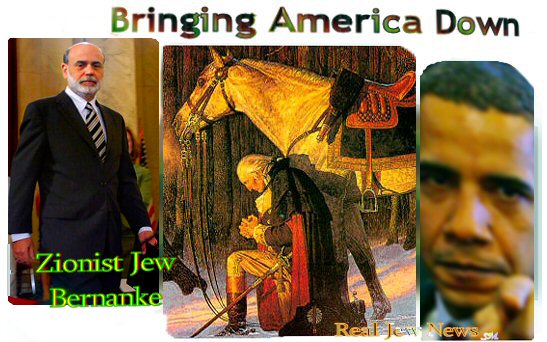 The Zionist-Jewish banking cabal — led by the Rothschilds who own the Federal Reserve Bank, and, by extension, much of America — are hell-bent on creating a One World Government.

Any sovereign “Christian nation,” such as America, (at least what it was historically), is an obstacle to their plans and must be brought down.

There are 6 stages engineered by Zionist Jews leading to America’s subjugation:

America’s Cultural Decline: This is being achieved by destroying and debasing our social, moral, and intellectual foundations via the Zionist owned & dominated mass media, the Internet, and through ever more toxic, corrupted government school and college curricula.

The drowning of America with illegal aliens and the accompanying ‘multiculturalism’ - along with the promotion of the homosexual/lesbian agenda - are the finishing touches to a once robust and proud culture.

America’s Industrial Decline: This has been achieved through so-called ‘free’ and ‘open trade,’ (which was not in the purview of America’s founding fathers), the loss of manufacturing and production base & services, and the exporting of countless American jobs to Second and Third World countries.

America’s Financial Decline: This has been achieved through USURY and the Federal Reserve Bank’s outrageous, un-Constitutional total control of the US money supply. With little remaining industrial base and skyrocketing unemployment & foreclosure rates, America is literally insolvent.

The so-called bailout (theft) of about $2 trillion from taxpayers by a cowardly, treasonous Congress, is being used to primarily fund chosen Zionist Jewish banksters and their utterly corrupt institutions. The $1.5 quadrillion in worthless derivatives guarantees the full financial destruction of America.

America’s Political Decline: This has been achieved through decades of the most massive political fraud in the history of ‘representative government.’

Since the coup/murder of JFK, America has been played for a sucker by NWO Globalists, ultimately run by The City of London Jewish banking-families, who have brilliantly kept American voters chasing their tails and illusions of ‘change’ via a succession of sock-puppet ‘presidents’ for decades.

The Obama-Emanuel White House will complete the job of installing overt fascism in a once-free and formerly ‘United’ States.

America’s Dollar Decline: This has been achieved through a number of economic and financial manipulations. Expect hyperinflation to be next … accompanied by probable stagflation as consumer demands withers to severe lows.

America’s Influence Decline: This has been achieved easily through the Iraq and Afghan wars, the mass use of nuclear weapons & their depleted uranium residues, and the genocide of at least four million human beings since the first Gulf ‘War’ alone.

THESE 6 AREAS OF DECLINE will become more pronounced in 2009. This will pave the way for the end of America’s sovereignty & open the door for a North American Union in which the elitist bankers will conduct their ‘governance’ - the latest slogan of the One World Government boys.

Zionist Jews Are Now In Control Of America.
And The Planned Fall Of America Is In Full Swing.

And: The Jewish Debasing Of Christian Culture Click Here