The Jewish Debasing Of American Culture

The Jewish Debasing Of American Culture, The Jews Behind Michael Jackson's Life And Death, Protocols Of The Elders Of Zion Fulfilled, Seinfeld & Jewish Propaganda, Jewification Of America Articles 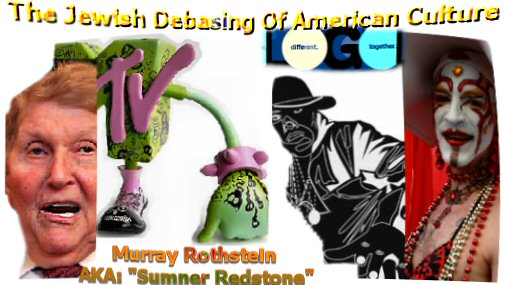 THE JEWISH DEBASING OF AMERICAN CULTURE
The Exaltation of Black Rap And Sexual Perversity
By Brother Nathanael Kapner, Copyright 2007-2009

Or Send Your Contribution To:
Brother Nathanael Kapner; PO Box 547; Priest River ID 83856
E-mail: bronathanael@yahoo.com
MURRAY ROTHSTEIN WAS BORN TO JEWISH PARENTS in 1923 in the state of Massachusetts. He now goes by the name, “Sumner Redstone.”


Murray Rothstein owns Viacom, a Media Corporation with subsidiaries such as, MTV, the Homosexual TV show, LOGO, and Paramount Pictures.

When Murray Rothstein puts on a video at his MTV subsidiary with blacks rapping such lyrics as: “Hey yo, I smoke dust and shoot cops, sell drugs on new lots, we dust brothers f**k mothers.”

I don’t think that Sumner Redstone, that is Murray Rothstien, really “grooves” into it. It’s for the Goys you know, and he’s making a killing on the dumb Goys who have been conditioned by MTV and all of the Jewish-controlled media to despise anything that remotely resembles Christian morality.

As for Murray’s homosexual show, LOGO, don’t think for a minute that if his son brought a boyfriend-lover home for dinner that Murray would be too delighted. Jews you see have an obsession that their children should marry and bear grandsons, thus conferring “immortality” on their Jewish progenitors. A homosexual son is not only a disgrace to a Jew, but tantamount to wiping him out of existence.

But The Show Must Go On, as the saying goes. And thus the Jewish-controlled media and their legal arm, the Jewish-run and funded, American Civil Liberties Union, (ACLU), are engaged in a relentless effort to promote public displays of perversion and decadence.

One such decadent public display is the Folsom Gay Street Fair held in Folsom County CA every year and recently on September 30 2007. The perverse public displays would outrage even the most flaming liberal.
See: Folsom Gay Fair
AND: Folsom Outrage 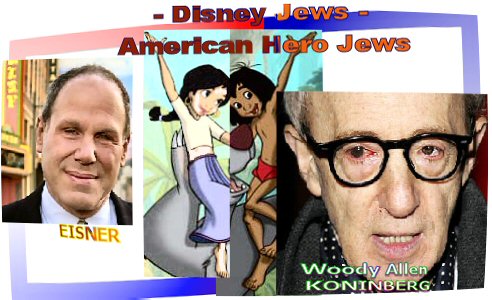 The Jewish Sabotage Of A Homogenous Christian Culture

WALT DISNEY PRODUCTIONS IS NOW OWNED by the Jew, Michael Eisner. Mickey Mouse and Donald Duck have been pre-empted by Eisner’s Jewish Agenda of promoting a multicultural America. Multiculturism is nothing less than the Jewish sabotage of a homogenous Christian culture.

Examples of Eisner’s promotion of multiculturism are two films that launched his career in shaping an Anti-Christian culture: The Jungle Book and Pocahontas. In both films, Eisner portrays White males as contemptible, racist, cowardly, and inept. The White heroine in The Jungle Book rejects her British-officer suitor and let’s herself be wooed and won by a “Jungle-boy.”

In Pocahontas, Eisner has Captain John Smith discarding Christianity in favor of American Indian animism through his union with Pocahontas. This Indian princess was named by those who knew her best: “little wanton,” (”pocahontas”).

What Eisner is not telling us is that Captain John Smith never married Pocahontas as she was already married with a 3 year old son. It was John Rolfe who had married “little wanton.” And the Jew Eisner would never scruple to tell his audience of children that it was Pocahontas who converted to Christianity, not vice versa.

As regards The Jungle Book, it bears no resemblance whatsoever to what was originally written by Rudyard Kipling. And what is the subliminal message that Eisner wishes to inject into the sensibilities of American children which will funnel out into American culture? That the White man with his Christianity is deficient in both moral virtues and spirituality.

But will Eisner teach his children and grandchildren to give up their Jewishness and intermarry with Hindus and Blacks? Eisner and his Jewish buddies would rather die than see their sons marry Calcutta Hinuds and Schwartzas! 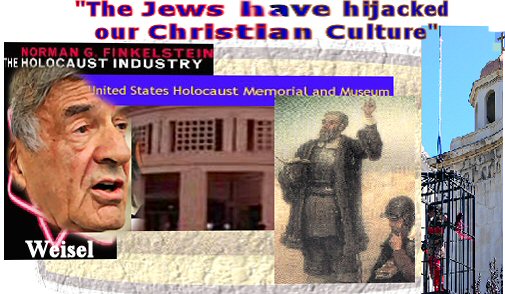 JEWISHNESS IS BEING SHOVED in our faces everywhere we turn. Because the Jews wish to position themselves as “victims,” they have exploited the Holocaust to make Americans feel protective of the poor Jewish victim of Anti-Semitism. But has anyone brought to mind that these so called “victims” happen to be the wealthiest sufferers the world has ever known?

Until we are able to perceive that - America will continue to be a Holocaust Remembrance society. High School Curriculums throughout America are teeming with it. Holocaust Museums and Holocaust Study Centers are in every major U.S. city. The Jews have made sure that our collective memory will not be a Christian one that America once extolled.

Woody Allen And The Jewish Science

THE JEWS HAVE SO PERMEATED our world-view and self-definition, that our culture has become a Prozac-fixated society. The Jewish Science, that is, Psychoanalysis, has so infused our consciousness, that instead of the John Waynes and the Mickey Mantles as our heroes, we now have as our prime American hero, the neurotic Jew and sex-obsessive pederast, Woody Allen.

Woody Allen, (born Allan Koningberg), typifies the man bereft of absolute truth, continually searching for meaning in a meaningless world, only to give up the search with the plunging into continual sexual gratification as the salvivic consolation. The best that Woody Allen can offer us by way of an example in real life, is his illicit sexual affair with the 16 year old adopted daughter of his second wife, Mia Farrow.

AMERICA WAS ONCE A NATION that bonded its citizens together through a common Christian memory, cause, and destiny. Christian decency has now been preempted by crass depravity through the Jewish-controlled Media and its legal arm, the Jewish-run and funded, American Civil Liberties Union. (ACLU).

Our Christian heritage has been undermined by the Jewish elite who have lobbied successfully for a “multicultural” (translate, “all belief-systems that will crowd out Christianity, “society. America, once known as a Christian nation, is now is now termed, thanks to Jewish Academia, a “pluralistic” nation.

But “pluralism” and “multiculturism” works to the Jews advantage: Divide And Conquer! What we have now in our nation, is not primarily a “pluralistic” society, but rather, a “Jewish” America.

WE STILL HAVE A CHANCE TO RECLAIM AMERICA out of the ruinous hands of the Jews. We can begin with makes a commitment to attend Church Services regularly and discussing with like-minded friends the issues that face us.

We Can Then Take Back Our Nation From The Jews
& Once Again Have A Christian America With Its Attendant Hope For The Future.