Obama To Lead US To More War, Death, Genocide 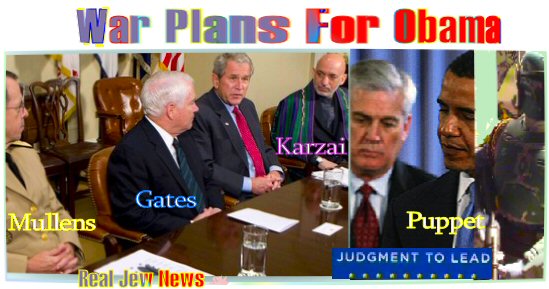 OBAMA TO LEAD US
TO MORE WAR, DEATH, GENOCIDE

Admiral Michael Mullen, Chairman of the Joint Chiefs of Staff, announced that he is “working to get as many troops into Afghanistan as quickly as possible to battle a more confident and successful Taliban.”

“I’ve been listening to Obama’s campaign and right now the Taliban is doing pretty well in Afghanistan. As we discuss with whom we negotiate, it’s important that we do so from a position of strength. More troops will give us that strength.” View Entire Story Here.

Mullen should tell the truth and say that the Military-Industrial-Congressional Complex (MICC) has been dictating to Obama all along their military agenda for him to promote in order to get elected.

That military agenda is an escalation of the war in Afghanistan. This means more blood shed, more of our American youth cut off in their prime, more civilians slaughtered, and more depleted uranium fall-out to deform Afghan babies while still in their mothers’ wombs. But what’s good for ‘military business’ is good for Amerika.

LONG BEFORE OBAMA WAS ELECTED, Mullen was calling for troop increases in Afghanistan & putting forth specific plans to widen the war into Pakistan.

“I hope to see three additional US brigades in Afghanistan which will be 10,000 troops. Terrorists have found safe havens along the Pakistani border. Because of a lack of border security by the new Pakistani government, terrorists are able to flow more freely in and out of Afghanistan. More troops will address this development.” View Entire Story Here.

On November 18 2008, Obama entered into talks with Defense Secretary Robert Gates. Terms were negotiated under which Gates would remain as Pentagon chief in Obama’s administration.

A GATES APPOINTMENT will signal that Obama’s plans for “change” in Iraq will not occur since Gates opposes a time table for a withdrawal plan. On November 1 2008, Gates told journalists that he favors “three additional Brigade Combat Teams for the Afghan theater of operations to counter the upsurge in violence.” This is exactly what Mullen is calling for.

How Did Obama Become President of the United States?
By Taking Orders From The Militarists
& The Zionist Jewish Bankers Who Fund Them —
That’s How.