A Christian America! - Not A Jewish America!

A Christian America! - Not A Jewish America!, America In Decline Articles, Jewification Of America Articles 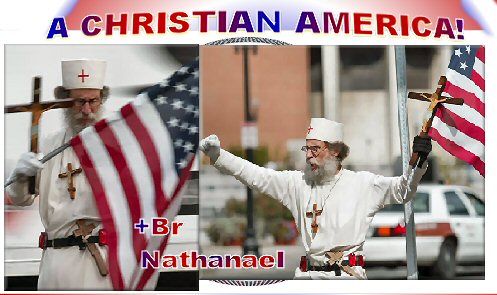 A Christian America! - Not A Jewish America!
By Brother Nathanael Kapner, Copyright 2007-2010

Or Send Your Contribution To:
Brother Nathanael Kapner; PO Box 547; Priest River ID 83856
E-mail: bronathanael@yahoo.com
WE ARE NOW LIVING in a “Jewish” America. We are no longer living in a “Christian” America. This is our misfortune.


St. Paul, who converted from Judaism to Christianity said, “The Jews please not God. They are contrary to all men. They forbid us to speak to the Gentiles that they might be saved.” (Thessalonians 2)

This oracle is fulfilled today before our very eyes. The Jews of the The National Jewish Democratic Council, led by Ira N. Forman, launched on an online petition to CNN, Fox News, NBC, CBS and ABC, urging them to no longer use the renown Christian publicist, Anne Coulter, as a commentator -simply because she said that “Jews should become Christians.”

The ACLU which is run and funded by Jews is hell bent on eradicating all public expressions of Christianity by the year 2015. The ACLU is doing this through the Jewish-controlled Court system. 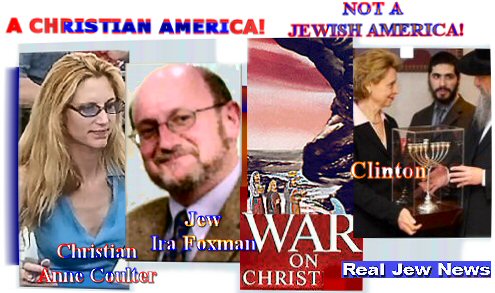 IVY LEAGUE UNIVERSITIES, which were once Christian Seminaries, are now inundated with Jews who carry with them their age-long Anti-Christian bias:

1. Harvard University: 2001-2006, President Lawrence Summers (replaced Jew, Neil Rudenstine).
Quote:
I speak with you today not as President of the University but as a concerned member of our community about the issue of anti-Semitism. I am Jewish.

3. Dartmouth College: 1987-1998, President James O. Freedman.
Quote:
I dearly wish that my father, who had confronted Anti-Semitism in finding his early teaching positions, had lived long enough to see the installation of Jewish Presidents at numerous Ivy League and Big Ten Universities.

THE ISRAEL LOBBY is the most powerful lobby in America now. And Jews are key advisors to American Presidents, beginning with Woodrow Wilson, FDR, and to the present President, George Bush.

How can we become a Christian America again?

How can we stop the Anti Christian subversion of our nation by the Jews?

1. We must all commit ourselves to Jesus Christ and regular Church attendance.

2. We must all speak out against the Jewish subversion of our nation at every oppurtunity and in every possible venue.

3. We must tell our Congressmen and Senators that we will not tolerate their cow-towing to Jewish money and influence.

Then and only then can we save our nation from Jewish ruination. Time is running out.