Source: McCain’s Chilling Project for America Here
THE ZIONIST SEEDS HAVE BEEN PLANTED by the Bush administration for the global dominance of a Zionist controlled America. This geopolitical Master Plan now appears to be counting on a McCain administration to nurture it.

This document, known as the “Wolfowitz Doctrine,” leaked by the NY Times, contained the following directives:

The U.S. should prevent the emergence of any rival superpower.

The US should undertake military actions through pre-emptive strikes.

The US should prepare to invade Iraq.

Indeed, this Zionist Master Plan, which calls for the establishment of a “new order” is hoped to be expanded by McCain whose Zionist handlers like Senator Lieberman, (constantly photographed with McCain), are in full control.

McCain’s connection to the PNAC began in 1994 when he was president of the New Citizenship Project founded by William Kristol in 1994. This organization parented the PNAC.

In 1998 McCain co-sponsored the Iraq Liberation Act—drafted by the PNAC—which decreed that a “regime change” in Iraq be US policy. The Act, signed by both McCain & Lieberman, led to the creation of the false intelligence of Saddam Hussein’s “Weapons Of Mass Destruction.”

McCain was also co-chair with Lieberman of the Committee for the Liberation of Iraq
established by the PNAC in late 2002. The CLI’s mission was to rally public support for a US Iraqi invasion. Using the false information of Hussein’s “WMD” it succeeded in duping the American public. 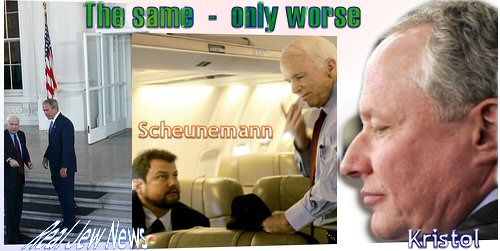 WILL JEWISH NEOCONS BE BACK IN THE WHITE HOUSE?

WITHOUT A DOUBT the Jewish neocons will be back in a McCain White House. Already former members of the PNAC are surrounding McCain. Zionist neocon Randy Scheunemann, founder of the Committee for the Liberation of Iraq mentioned above, is McCain’s foreign policy advisor.

As a preview of things to come, on June 12 2008, Scheunemann accused Obama of a “policy of delusion” toward terrorism - meaning that the “war on terrorism” will be expanded by McCain.

Scheunemann is joined by his fellow Jewish neocons of the now defunct PNAC as McCain’s advisors. They are William Kristol, (former President of the PNAC), & Robert Kagan, (former Director of the PNAC), in “advising” their puppet, John McCain.

I Recommend That The Zionist Master Plan For Perpetual War Be Stopped!

And: “McCain Panders To The Israel Lobby” Click Here

And: “The War On Terror Is A Jewish Hoax” Click Here