How Jews Control The American Media 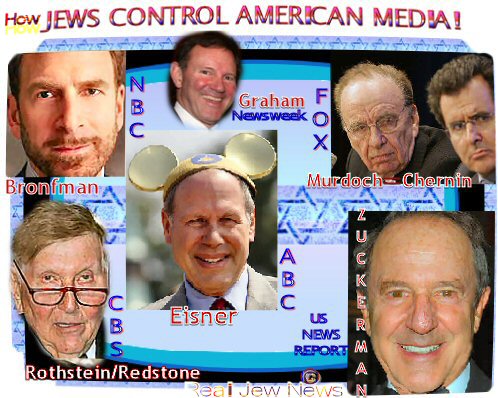 HOW JEWS CONTROL
THE AMERICAN MEDIA


And these Jews are on a fierce campaign to eradicate any semblance of Christianity in America.

Here Is A List Of The Jews Who Own The Major Media In The US:

Here Is How The Jewish Media Forms Our Opinions:

Promoting Pornography, Homosexuality, & Lesbianism: Jews through their Media control are hell-bent on destroying Christian morality & consciousness in America. Thus they gain control over the subverted masses.

Promoting Political Candidates Who Support Zionism: A perfect example of this is the Jewish Media’s blackout of Presidential candidate Ron Paul who spoke against military & financial aid to Israel Here.

Promoting Violence: Jews through their Media-control wish to create a disordered society so as to dominate the masses through their highly-organized and monolithic institutions.

Promoting Multiculturalism: The Jewish controlled Media bombards Americans with images of “diversity.” This is to dilute our once-Christian society in order for Jewry, a united entity, to intensify their domination.

We Can Stop The Jews If We Commit Our Lives To Jesus Christ
And To A Christian Life Once Again!

And: “A Christian America - Not A Jewish America!” Click Here

And: “Protocols Of The Elders Of Zion Fulfilled! Click Here