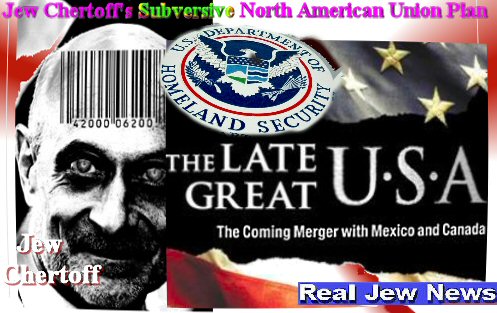 Or Send Your Contribution To:
Brother Nathanael Kapner; PO Box 547; Priest River ID 83856
E-mail: bronathanael@yahoo.com
NOT ONLY DO WE HAVE THE JEW MICHAEL CHERTOFF POLICING our nation as Secretary and chief of US Homeland Security, he wants to destroy our nation’s sovereignty as well.


Why? Because Jews wish to destroy America’s Christian memory.

America’s memory is a Christian heritage which Jews despise. A North American Union, (by which the US, Mexico, and Canada, will unite as a sovereign unit), will eradicate America’s Christian memory. This will make the Jews very happy. And the Jew Michael Chertoff is the leading instigator of the Anti-Christian North American Union.

ABOUT THE JEW MICHAEL CHERTOFF

November 28 1953: Michael Chertoff is born in NJ of Rabbi Gershon Chertoff and Israeli-citizen mother, Livia Eisen, who worked for Israel’s El Al airlines. Michael Chertoff’s birth certificate registers him as a dual-citizen of Israel and USA.

May 24 2001: Chertoff appointed by President Bush as head of Criminal Division of the Justice Department’s US Attorney-General Office.

In this position Chertoff is chief-architect of Bush’s War on Terrorism. Chertoff concocts an Al Quaida connection with fugitive Osama Bin Laden directing 9-11 activities from a cave in Afghanistan. Chertoff does this to divert focus on Israel’s complicity in the World Trade Center bombing.

February 15 2005: Sworn in as Secretary of US Homeland Security, no one is aware that Chertoff has dual citizenship in Israel and USA. Chertoff immediately goes to work on implementing the Anti-Christian North American Union.

August 27 2007: Chertoff speaks before the International Association of the Chiefs of Police. He tells them: “We now have a capability of potential terrorists to radicalize themselves over the Internet. They never have to go to a terrorist training camp. These are the kind of terrorists that we may not be able to detect with spies and satellites.” 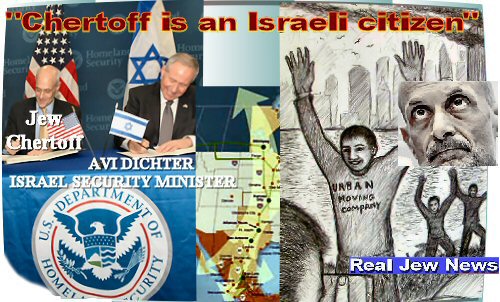 # September 11 2001: One group of 5 Israelis of Urban Moving Systems are seen on the roof of a nearby building videotaping and celebrating the destruction of the World Trade Center.

# September 11 2001: A “Dominic Suter” (fake name) the owner of Urban Moving Systems, which was found to be a Mossad front company, flees to Israel with Michael Chertoff’s aid. This was right after FBI agents requested a second interview.

# September 21 2001: Michael Chertoff arranges for the group of 5 Israeli workers, (Mossad agents), of Urban Moving Systems, to be returned to Israel on “visa violations.” 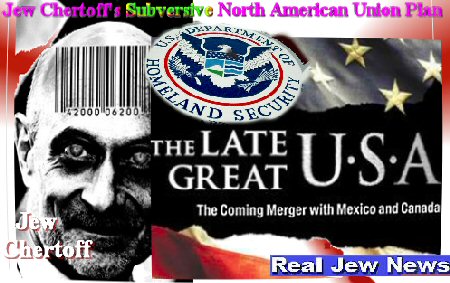 Their stated goal is for “a safer, more prosperous North America.” Chertoff, as Secretary of US Homeland Security, was given full access to the meeting’s proceedings and minutes.

September 22 2005: Chertoff implements the Security and Prosperity Partnership (SPP). The SPP is designed “to promote security and business partnerships between the North American nations.” Critics maintained that the SPP partnership was merely a cover to advance a North American Union which would compromise U.S. sovereignty.

December 2005: A Council on Foreign Relations (CFR) document, called “Building a North American Community,” calls for North American integration with “open borders between Mexico, US, and Canada, for the movement of goods and people.” The SPP Web Site which Chertoff oversees, is almost verbatim the CFR outline for the North American Union.

February 16, 2007: Chertoff and Secretary of State Condoleezza Rice, (two of three Cabinet heads overseeing the SPP), attend a North American Union meeting in Ottawa Canada to discuss business partnerships vis-a-vis the NAFTA Super Highway that stretches from southern Mexico through the US up to Montreal Canada.

Chertoff, the chief architect of George W. Bush’s War On Terrorism unfolds his plan to use the pretext of the War on Terrorism to merge large corporations, government power, military interests, and police law enforcement, into a “secure” yet prosperous North American Union. In such a scenario, powerful elites, namely, Jews, like Michael Chertoff, will rule.

JEWS LIKE MICHAEL CHERTOFF MUST BE STOPPED BEFORE THEY DESTROY AMERICA

A North American Union will bring us one step closer to a One World Government setting the stage for the appearance of the Jewish Anti-Christ. But we can stop Jews like Michael Chertoff from bringing on a One World Government which will destroy America’s sovereignty and Christian heritage. We can do this by keeping Jews out of politics.

We must be aware of Jewish appointments to high places and Jewish hopefuls for Congress and Senate positions. Then we simply use our voting power and protests to deny Jews their desire to rule over us.

It is time for us all to raise our voices crying, “A Christian America! Not A Jewish America!” For in a pluralistic, multi-cultural society, such as which a North American Union envisions, the Jews will rule. And the Jewish Anti-Christ will come!

ON AUGUST 27 2007 the Jew Michael Chertoff, Secretary of US Homeland Security gave a speech before the International Association of the Chiefs of Police. The Anti Christ Jew Chertoff told them:

— “Disaffected people living in the US may develop radical ideologies and potentially violent skills over the Internet, something that can present the next major security threat to the nation and to the world.

We now have a capability of potential terrorists to radicalize themselves over the Internet. They never have to go to a terrorist training camp. These are the kind of terrorists that we may not be able to detect with spies and satellites.” —

But how will Big Brother Jew Chertoff decide who are the “disaffected people?” Those who criticize the Jews? (We are in the minority you know…).