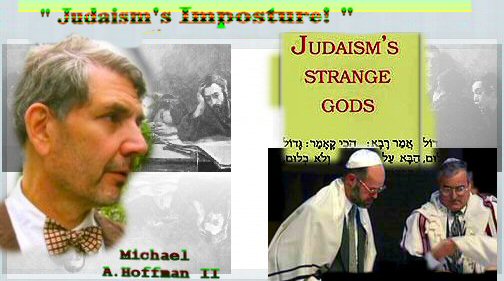 Michael A Hoffman II, historian and writer, is the founder of Independent History & Research. He was educated at the University of New York and is a former reporter for the New York Bureau of the Associated Press.

Hoffman is the author of several books, including the well known, Judaism’s Strange Gods. His newsletter, The Hoffman Wire, is sent out weekly to thousands of supporters.

Br Nathanael: Is Judaism based on the Old Testament Scriptures?

After the Jewish leadership crucified Jesus Christ, and their subsequent killings and persecution of Christians throughout the Roman world, the rabbis committed to writing the “traditions of the elders” which formed the first part of the Talmud called the Mishnah.

Br Nathanael: Is then Judaism based on the Talmud and not on the Bible?

Michael Hoffman: The hermeneutic system of Judaism is not based on the Bible but on the Talmud. This must be understood when dealing with the rabbis and their submissive flock. Judaism, though much in vogue with Evangelicals and Roman Catholics, is totally alien to the only Biblical religion on earth today, Christianity.

Br Nathanael: You said above that Jesus Christ denounced the traditions of the elders? How so?

Michael Hoffman: The rabbis teach that the revelation granted to Moses had been delivered in two forms, a smaller revelation in writing, and the larger one kept oral.

This supposed transmission of the Oral Law, the “tradition of the elders,” was challenged by Jesus who termed it “commandments of men which nullify the Word of God.”

Thus Jesus made the tale of the transmission a fraud. It is a lie concocted in hell to claim that Moses issued two sets of law, one written and public - the other oral and secret. In the entire Bible there is nothing to support this imposture. 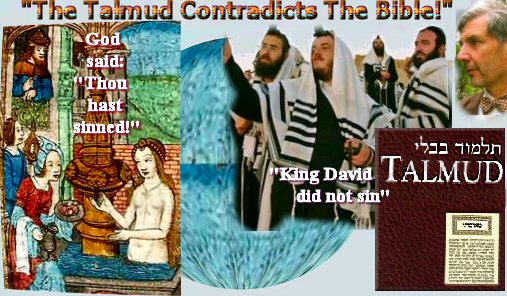 Br Nathanael: So the oral tradition of the Jews is not consonant with the Old Testament?

Michael Hoffman: Not at all. The spurious claim of an oral “tradition of the elders” bequeathed by God to Moses is anti-Biblical, just as Jesus asserted.

Christ very simply illuminated the fact that if the Pharisaic tradition had indeed been from Moses, then they would have become Christians. For Christ rebuked them saying, “Had ye believed Moses, ye would have believed Me, for he wrote of Me. But if ye believe not his writings, how shall ye believe My words?”

Here Jesus annihilated in one stroke the basis for the religion of Judaism and its conceit of an oral tradition given to it by Moses. For had such a tradition existed it would have testified of Jesus the Messiah. Instead, Christ tells them point blank that they do not follow Moses!

Br Nathanael: When speaking of the centrality of the Talmud in Judaism, you refer to the “rabbis and their submissive flock.” How then does the Jewish secularist figure into this submissive flock?

Michael Hoffman: All of those within the polity of Judaism, even the Jewish secularist, give tacit allegiance to the rabbis. How often have we heard from any of them when challenged with the Messiahship of Jesus, this response: But the rabbis do not believe in Jesus!

Well of course they do not believe! How could they? For as Jesus stated in his reproof to the Pharisees, their tradition is a denial of what Moses wrote about the coming of the Messiah in the Person of Jesus Christ. Moreover, as regards the Jewish secularist, he exhibits the same chauvinism and racism as the Talmudists.

Br Nathanael: With the Talmud being the basis of Judaism, how then does one bring the Gospel message to the rabbis and their followers?

Michael Hoffman: When presenting Old Testament proofs of the Messiahship of Jesus to the rabbis and their followers - one must penetrate the iron-clad grid of the Talmudic mind-set which according to Christ’s assertion makes the Scriptures of none effect.

From the outset, the Christian must realize that the rabbis and their followers do not know their own Scriptures, and for that matter, do not care to know them. For they view the Talmud as superceding the Scriptures. Much patience is required when bringing the Gospel message to them, and perhaps at times, stern reproofs are necessary.

Br Nathanael: What do you mean by saying that the Jewish secularist exhibits the same chauvinism and racism as believers in the Talmud?

Michael Hoffman: The main tenet of Judaism is Jewish self-worship. Judaism has as its “god,” not the God of Abraham, Isaac, and Jacob, but the worship of the Jewish people.

Jewish self-worship is at the core of the Talmud. The secularist amongst them shares in this self-worship. For the Talmud teaches that the Gentile is a lower form of humanity. They all believe that they have this special-ness about them, believing the myth that they, not the Christians, are the “chosen people.”

Coupled with the false notion that they are the “chosen people” - regardless of their unethical conduct, their gross distortions of the God of the Bible, their unbelief, their hatred of Biblical Christian culture, (which has afforded them asylum in Christian nations), and their persistent rejection of Jesus the Messiah - the Talmud teaches that those within Judaism are of a higher form of humanity than others. For they pray both in the synagogue and in their homes, “I thank Thee O God that Thou has not made me a Gentile.”

Br Nathanael: You say that the Talmud has made the Scriptures of none effect. How so?

Michael A. Hoffman: In the Gospel of Mark Chapter 7, Jesus rebuked the Pharisees saying, “You make the Word of God of none effect by your tradition that you have handed down.” There is little in the Talmud which refers to Old Testament Scriptures - but rather, teachings that are contrary to the Scriptures.

The Talmud teaches that a Jew may *kill, **steal, and ***lie to non-Jews with impunity -yet all of these actions are in violation of the 6th, 7th, and 9th commandments of Moses. Here is but one example of the Oral Law making the Word of God “of none effect.” [*Tractates Sanhedrin 58b; **Baba Mezia 24a; **Sanhedrin 57a; ***Baba Kama 113a]

There is also the Talmudic nullification of the sin of King David, by which sin, Christians have learned to shun the sins of adultery and hostility, reciting the penitent words of King David in Psalm 51. But the religion of Judaism will have none of this! For the Talmud states: “whosoever says King David sinned is mistaken.”

According to the Talmud the practice in those days for men going to war was to give their wives conditional divorces. The Talmud states that Bathsheba was no longer married and hence decrees that King David did not sin.

What the rabbis are actually saying is that it is God who is mistaken–yet the Word of God clearly declares that David sinned by killing Uriah the Hittite and committing adultery with his wife: “Now therefore the sword shall never depart from thine house because thou hast despised Me and hast taken the wife of Uriah the Hittite to be thy wife.” (II Samuel 12) 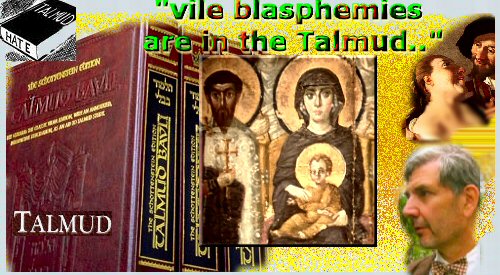 Br Nathanael: Is it true that the Talmud blasphemes Jesus Christ and the Virgin Mary?

Michael Hoffman: The Talmud indeed blasphemes Jesus Christ and the Virgin Mary. Tractate Sanhedrin 106a says that Jesus’ mother was a harlot: “She who was a descendant of princes and governors played the harlot with carpenters.” Also in Tractate Shabbath 104b of the Talmud, it is stated: “Miriam the hairdresser had sex with many men.”

As regard the Talmud’s treatment of Jesus Christ, Tractates Sanhedrin 107b and Sotah 47a say: “Jesus was sexually immoral, worshipped statues of stone and brick, was cut off from the Jewish people for his wickedness, and refused to repent.” And even a more vile blasphemy is written in Tractate Gitten 57: “Jesus is in hell, being boiled in hot excrement.”

Br Nathanael: What attitude then should Christians take towards Judaism?

Michael Hoffman: Christians must understand that the religion of Judaism is anti-Biblical. The true religion of the God of Israel is Christianity not Judaism. Judaism is simply a perversion of God’s original revelation to the Hebrew nation–it is the very religion of nullification of the Old Testament.