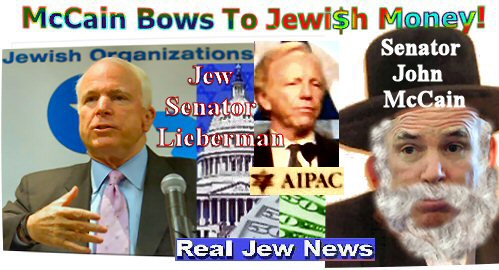 
The Republican Presidential hopeful, Senator John McCain of Arizona, knows that in order to get elected he must pander to the Jews.

This is why John McCain is giving SO MANY speeches to the Jews:

* “In view of the increased threats to Israeli security, American support for Israel should intensify – providing military equipment and technology.”
McCain to Jewish Institute of National Security Affairs (JINSA), December 5 2006.

* “Stability in the Middle East, including Israel, rests on a decisive American victory in Iraq.”
McCain to Presidents Of Major American Jewish Organizations Conference, October 30 2007.

* “The United States must take a tougher stand with regard to Putin. I would seriously consider saying the G-8 should not invite Putin to its next meeting.” [Jews fear Russian Orthodox Christian Putin for his opposition to their New World Order agenda.]
McCain Interview With Boston Herald, December 19 2007.

For All The Above See: “McCain’s Jewish Support” Here 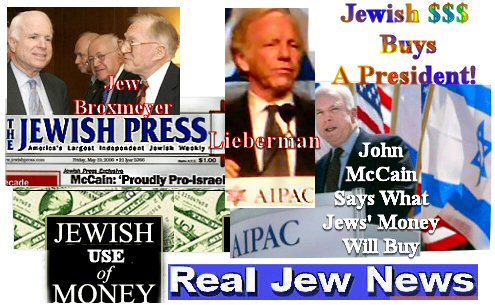 Here is a list of the Jews who will come collecting for their HUGE donations if McCain gets elected as President:

$ Lewis Eisenberg: NYC Multimillionaire. Served as Finance Chairman for the Republican National Committee. Former Chairman of Port Authority of New York/New Jersey. On Board of Directors of Goldman Sachs Bank. McCain has Eisenberg as a major donor.

$ Henry Kravis: New York investor & financier. Known for his company, Kohlberg Kravis Roberts Investments, which in its controversial takeover of Nabisco was tagged with the name, Barbarians At The Gate. McCain vied with Giuliani for Kravis’ big bucks and won.

~ Chairman of the U.S. Holocaust Memorial Council and a fund-raiser in the Jewish community for President W. Bush. Influential lobbyist with both the American Israel Public Affairs Committee (AIPAC) and the Anti-Defamation League (ADL). Vice-chair of the Republican Jewish Coalition. McCain has Eisenberg as a major donor.

For All The Above See: “Tracking Jewish Money”
Here

Topping McCain’s list of Jewish supporters is Senator Joseph Lieberman (Conn). Senator Lieberman is an Orthodox Jew who subscribes to the racist Jewish Talmud. Lieberman’s recent backing of McCain is his plan to become McCain’s Vice-President. That’s the way for McCain to really get some BIG JEWISH BUCKS!

But God forbid it that we should ever have an Orthodox Jew like Lieberman whose ancestors crucified Jesus Christ anywhere near the White House! For if McCain gets elected on a McCain-Lieberman ticket - we will have Jews crawling like roaches all over the White House! And Hanukah Menorahs will be in every White House window too!

Is this what you want my fellow Christian Americans? Jews running & ruining our Christian nation?