“OBAMA NOMINATES THREE TO FED BOARD,” reported the Wall Street Journal on April 29, 2010.


What the Journal failed to report is that all three appointees are cookie-cutter pro-Zionist Jewish Americans.

This is hardly a surprise…the Fed has always been a Zionist-Jewish enterprise…and Obama follows ‘the rules’ carefully. He remembers what happens to those who go astray…Ron Brown, Senator Wellstone and so many others.

One can’t help from wondering, is it required that everyone in the Fed be Jewish? Or to have Jewish connections and fealty? The answer is profoundly…and historically…obvious: unless you’re zionist kosher, you’re out of luck. 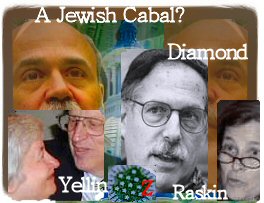 Janet Yellen’s Jewish husband, George Akerlof, is a consultant (!) to the Federal Reserve and various English banks like Barclays…and invented their paper Gold and developed algorithms for ‘managing’ (rigging) currency markets. He won a Nobel prize essentially for that.

Peter Diamond is hailed by American Jewry as an “influential Jewish economist” amongst the Gentiles. The general buzz from US Jewish bankers is one of similar celebration over Sarah Bloom Raskin’s nomination.

WHETHER OR NOT these ‘acclaimed’ financial ‘experts’ — along with the Fed’s Chairman, Ben Shalom Bernanke — will serve the American people or international Zionist interests, seems moot.

History doesn’t lie. Yet no one appears to be complaining that the same kosher cabal which oversaw America’s financial catastrophe and looted the US to the core, will continue to run the show.

Although these rubber-stamped ‘nominees’ aren’t likely to alter the Fed’s current interest-rate policy, they will indeed reinforce the Fed’s activist bent to regulate “risk-taking” (a deceptive lie) across the financial system and tighten consumer regulation (which will ultimately restrict consumer credit options.)

“The Federal Reserve system is going to be reshaped,” said Vincent Reinhart, a former top Fed staffer now at the American Enterprise Institute. “The new governors will certainly be activist in their ability to set regulations and enforce those regulations.”

Who can state it more clearly than a propagandist from the Jewish-run American Enterprise Institute? “Regulations” (more of them, dear American sheep) will be “enforced” upon the American goyim by Zionist Jewish Federal Reserve Governors…who bask in ecstasy over their ability to dominate most major American affairs.

“THE FEDERAL RESERVE IS THE CHIEF CULPRIT BEHIND THE ECONOMIC CRISIS,” declared patriot hero Rep. Ron Paul when introducing his Federal Reserve Transparency Act to the House of Representatives on February 26, 2009.

“Since the Federal Reserve Bank’s creation in 1913 the dollar has lost more than 96% of its value,” Ron Paul continued, “and by recklessly inflating the money supply the Fed continues to distort interest rates and intentionally erode the value of the dollar.”

The bill, although it remains hamstrung in the Senate and voted against by many Jews in the House, (and would doubtless be vetoed by Zionist-owned Obama), is Ron Paul’s attempt to pry open the mouth of Ben Shalom Bernanke who refuses to tell the American people to whom he doled out $2 trillion in bailout funds. Think about that. This creep has given away TWO TRILLION of YOUR money and refuses to say where it went. And Americans do nothing about it.

Bernanke, who alleges that disclosure would cast “a stigma” on recipients (what BS), is challenged by Ron Paul who says that the American taxpayer has a right to know where their hard-earned money went.

Efforts to break the Fed have been tried before but the sad truth is the Zionist-Jewish banking cartel has far, far too much power over the entire Zionist bought-and-paid-for US political arena.

IN 1993, the Head of the House Banking Committee, Rep. Henry Gonzalez of Texas, authored legislation calling for an independent audit of the Federal Reserve System’s operations.

After getting House and Senate approval for his bill and stepping up his attack on Fed Chairman Alan Greenspan for “failing to provide” essential documents concerning its check transport system, President Clinton intervened and turned down the legislation. His reason? Clinton claimed that ongoing audits would “run the risk of undermining market confidence in the Fed.” Comrade Clinton follows orders well.

Responding to Clinton’s objection to an audit, the fierce adversary of the Fed, Murray Rothbard, contended: “What is going on here? Why does market confidence depend on assuring far less scrutiny than is accorded keepers of military secrets that might benefit foreign enemies?”

Today, in light of Ron Paul’s stalled legislation, we might ask ourselves the same question, “What IS going on here?” But so long as the Jews who operate behind closed doors at the Federal Reserve refuse to disclose their secret manipulations — “We, The Cattle” will never know.

PRESSING FOR CONTINUITY, Comrade Obama is now “prodding” his White House economic team to “remain with his administration” until the economy is on a stronger footing.

“The recovery is still shaky,” said Chief of Staff (and ultra Zionist) Rahm Emanuel, “and with high unemployment this is not the time to have a turnover. The president desires to have continuity in his economic policy.”

“Continuity” is certainly assured within the Obama economic team with a seamless unity existing between the White House corridors and the halls of the Federal Reserve Board of Governors. It is a pernicious, cohesive Zionist chain which links money, control and power to a Jewish banking and financial continuum long existing in high places in the American political system. 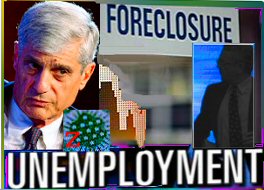 THE SENIOR FELLOW of this Jewish chain, is Robert Rubin, who recently said he “deeply regrets” he didn’t see the 2008 financial crisis coming in his role as a $15 million per year chief at Citigroup.

“All of us involved, whether financial firms, regulators, ratings agencies, and analysts missed the powerful combination of forces at work and the serious possibility of a massive crisis,” Rubin admitted. (Right…they just couldn’t see it coming.)

With Rubin’s confession now made public, some American cattle (chattel) are asking, “Are the Jews who led us into the economic mess the best ones to lead us out of it?” (Uh…sure…let’s have Gangster Group A replaced by Gangster Group B.)

Obama, in appointing three more Jews to the Fed and keeping a host of their synagogue buddies at the White House, would answer with a ringing and pre-ordained “Yes.”

And: The US ‘Recovery’ And Bernanke’s Jewish Lies Click Here