Will The Jewish Ban On Franklin Graham Backfire?

A Christian America! - Not A Jewish America!, Jewish Agenda Articles

WILL THE JEWISH BAN
ON FRANKLIN GRAHAM BACKFIRE?

THE PENTAGON HAD INVITED BILLY GRAHAM’S SON, the Reverend Franklin Graham, to deliver the opening sermon for their National Day of Prayer service on May 6, 2010.

The worship service, held as part of the chaplain’s regular program of multi-denominational religious events, was a joint effort between the National Day of Prayer Task Force and the Pentagon chaplain’s office.

According to Army Colonel George Campbell, the Pentagon’s chaplain, the Reverend Franklin Graham had participated in Pentagon religious services at least twice in the past three years, attracting large crowds each time. “He’s a big draw,” Campbell said in an interview.

Although Graham’s engagement had been posted on the chaplain’s website for three months to which all Pentagon employees have access, it was only a week prior to the event that three members of the building’s Muslim community voiced their concerns about the speaker. 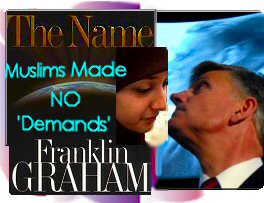 “The Muslims expressed their concern about Graham’s view of the Islamic faith,” Campbell stated. “They weren’t asking us to do anything about Graham’s engagement this year. They simply said, ‘We’re just trying to raise the level of sensitivity in the future.’”

Pointing to Graham’s latest book, The Name, where he had written that “Christianity and Islam are enemies locked in a classic struggle,” the Muslim employees did not make any demands on the chaplain, but only wished for an even-handed approach by his office.

Campbell responded by saying that the Muslims had made a “reasonable request,” yet at the same time, announced that the Pentagon would not withdraw Graham’s invitation.

The chaplain underlined his decision by stating: “As part of the freedom we have as Americans, I defend Graham’s right to voice his religious views. To cancel Graham would be contrary to the mission of my office to make sure everyone’s religious needs are met.” View Entire Story Here.

All was settled…all was fine…UNTIL the Jews stepped in and sunk their evil fangs into the scene.

“LADY LIBERTY IS SMILING TODAY,” arrogantly boasted Michael Weinstein, founder and president of the Military Religious Freedom Foundation, a Jewish organization whose aim is promoting multicultural diversity and the annihilation of a Christian presence in the US military.

The Military Religious Freedom Foundation objected to Graham’s scheduled appearance at the prayer event ostensibly because of his past remarks about Islam as an “evil religion.”

“We are preparing to seek a restraining order against National Prayer Day if it is polluted by Franklin Graham,” said Weinstein, head of the group.

On April 19, 2010, with legal threats made by the organization’s Jewish lawyer, Victor Glasberg, Weinstein sent a letter to Defense Secretary Robert Gates DEMANDING (yes, Jews MAKE DEMANDS on the Goyim), that a man MUCH BETTER THAN THESE JEWS WILL EVER BE, be banned from speaking.

Robert Gates, who administers US wars across the globe, found himself to be no match against the vicious Jews and their formidable weapons of intimidation: 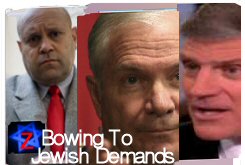 “We demand that the Pentagon immediately rescind its invitation to Mr Graham and choose a more appropriate speaker for this high profile event.

First of all, why doesn’t Weinstein and his Jewish lawyer who are so concerned for “separation of Church and State,” litigate against the National Lighting of the Menorah held on the White House Lawn every year to the exclusion of all Christian symbols? I will tell you why. Because the Jews want to take over America by destroying Christianity, that’s why.

Second, because of pressure from these Jews, on April 26, Gates made sure Army officials, bypassing the Pentagon Chaplain’s office, disinvite Graham from speaking.

Third, due to Weinstein and Glasberg’s petition for a restraining order on the Pentagon event, a federal judge in Wisconsin, Barbara Crabb, ruled that the National Day of Prayer is unconstitutional.

“We congratulate the court for making the right decision,” said Weinstein in celebrating the removal of a Christian witness in our ONCE CHRISTIAN nation’s public affairs. We now live, to our nation’s great enfeeblement, in a Jewish America.

WILL IT BACKFIRE ON THE JEWS?

ON APRIL 21, 2010, the Jewish Forward published an article about accusations Jews are beginning to receive due to their “dual loyalty” status as American citizens.

Writing that the charge of “dual loyalty” has “dogged Jews for centuries” and that the allegation that “their allegiance is to their tribe first and not to their nation,” the Forward seems to be raising to consciousness a latent anxiety inherent in the phenomenon of Jewish separatism.

Citing a recent report by General David Petraeus who said that the “continuation of the Israeli-Palestinian conflict undermines American national interests,” the Jewish newspaper is wondering if this “anti-Israel” view will spill over into an “anti-Jewish” attitude. 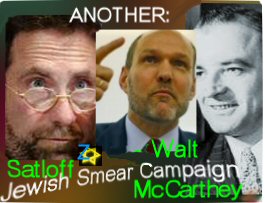 “A worried reaction can be seen among a wide swath of Jewish groups,” the Forward reported, “and now with the dual loyalty suspicion taken up by Harvard professor Stephen Walt, a mass visit to Washington by the Jewish community is paramount to convey concerns about US-Israel relations,” the paper added. (Jews are now smearing the highly respected Professor Walt as a “McCarthyite.”)

Along with this “expressed anxiety,” are the recent Senate interrogations of Goldman Sachs Jewish executives for defrauding the American people in taking short positions on mortgage securities and then failing to tell them that the securities they were selling were a very high risk.

MOST ALARMING TO THE JEWISH COMMUNITY with respect to the interrogations, is that demonstrators outside were displaying “bankster” photographs of Lloyd Blankfein, CEO of Goldman Sachs, and demanding that he be jailed along with the other executives of the investment bank.

While the Jewish Forward concludes its piece by writing that the “feeling of anxiety” in the Jewish community “might be a result of a shift in orientation to left from right in the American government — at the same time — other Jewish agencies are pointing to right leaning tea partiers, observing that the tea partiers are “blaming the Jews for causing the nation’s current economic downturn.”

This author, a former Jew, takes a more factual view. If Jewish leaders persist in alienating Americans whether from the left or from the right, then the squeeze will be felt by those who identify with neither but remain a ‘people apart.’

And: Separation Of Church & State Is A Jewish Lie Click Here