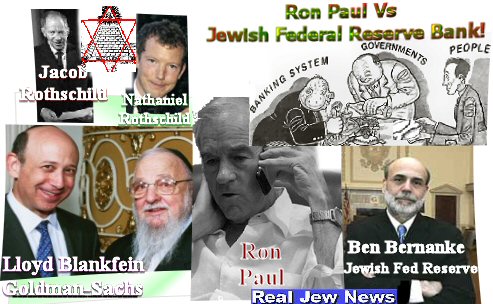 In a speech before Congress in 2002, entitled Abolish the Fed, Ron Paul said:

— “Abolishing the Federal Reserve will allow Congress to reassert its Constitutional authority over monetary policy. The Constitution does not give Congress the authority to delegate control over monetary policy to a Central Bank. I urge my colleagues to put an end to the manipulation of the money supply which erodes Americans’ standard of living and enriches well-connected elites.” —

These are fighting words! Then in April 2007, Ron Paul came out slugging again in his Congressional speech entitled The Federal Reserve Monopoly over Money:

— “The greatest threat facing America today is not terrorism or illegal immigration. The greatest threat is the shameless deficit spending of our government and Federal Reserve currency devaluation. The Press sometimes criticizes Federal Reserve policy but the validity of the fiat system itself is never challenged. History shows that when the destruction of monetary value becomes rampant, the political structure becomes unstable. We then have good reason to be concerned about the future of our nation.” — 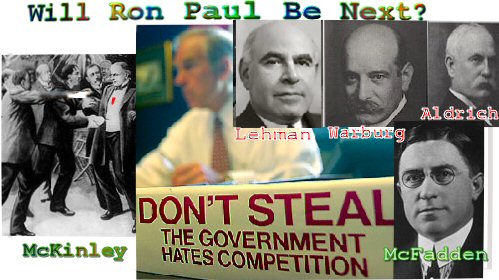 It was Jacob Rothschild II who in a letter to his US agents in 1863 with regard to establishing a Central Bank in America said: “The few who understand the system will either be so interested from its profits or so dependant on its favors that there will be no opposition from that class. The other class will simply have no comprehension or concern about American monetary policy.”

Here is an historical overview of the makings of the Jewish-owned Federal Reserve Bank:

THE JEW Paul Warburg (1868-1932), came to the United States from Germany in 1902, buying into the partnership of the Jewish owned bank Kuhn, Loeb and Co. with the financial backing of the Rothschilds.

Paul Warburg was a man with a mission, sent here by the Alfred Rothschild to lobby for the passing of a Central Banking Law in Congress. On January 6, 1907, the New York Times published an article by Warburg, called “Defects and Needs of Our Banking System.”

In 1908, Sen. Nelson W. Aldrich, (father-in-law of John D. Rockefeller Jr), and a Rothschild agent, proposed a bill recommending a Central Bank. A member of Congress for 40 years, Aldrich was the most powerful man in Congress and was the Chairman of the Senate Finance Committee.

Without going into the labyrinth of the contrivances of the Jewish Bankers and the Jewish propaganda machine, on October 25, 1914, the formal establishment of the Federal Reserve System was announced by Congress with Paul Warburg and the Rothschild ally, J.P. Morgan, at its head.

These are all Jewish names are they not? And these Jewish bankers and their Jewish money initiated a strangle-hood on American political life. A very courageous man who committed political suicide tried to stop them.

THE ASSASSINATION OF CONGRESSMAN McFADDEN

ON DECEMBER 15 1931, Rep. Louis T. McFadden, who for more than ten years served as Chairman of the Banking and Currency Committee in the House of Representatives, said:

— “The Federal Reserve Board and banks are the duly appointed agents of foreign central banks. They are more concerned with their foreign customers than they are with the people of the United States. Their plan is to create a system of financial and political control of every nation and economy of the world.” —

In a stinging indictment of the Board of the Federal Reserve System, Congressman McFadden gave his famous speech on June 10 1932 before Congress saying, “”Mr. Chairman, we have in this Country one of the most corrupt institutions the world has ever known. I refer to the Federal Reserve Banks.”

Because of this speech, Louis T. McFadden had unleashed the full power of the international Jewish criminals against him. The political life of this great servant of the people was terminated in the November 1934 elections held in the 15th Congressional District of Pennsylvania. Jewish money was lavished on the election campaign of McFadden’s opponent. Two attempts were then taken on McFadden’s life and the third attempt by poisoning, while Louis T. McFadden was visiting New York City in 1936, ended his political career and life, once and for all.

THE JEWS OF THE FEDERAL RESERVE BANK MUST BE STOPPED

RON PAUL NEEDS our support. But beyond supporting Ron Paul a clear ideology must be enunciated. The ideology that I am recommending is to be found in the re-emergence of a “Christian World View.”

A Christian World View will underline a basic tenet: “Jews are under a Deicidal Blood Curse which they called down upon themselves when they cried out before Pontius Pilate, ‘Crucify Him! Crucify Him! His blood be upon us and upon our children.’”

We must ask ourselves: “Do we want an accursed people, the Jews, to rule our monetary system?” Of course the answer is a resounding “No!”

Let us then take up the Sword Of The Spirit and spread the word to every man, including the Jews: “Christ is the King of our government. Away with the enemies of Christ, the Jews, who seek to undermine our political life through their ownership of the Federal Reserve Bank!”

And pray that Ron Paul, a defender of the ideals of our once Christian nation, will be protected by the Lord Jesus Christ from the murderous hands of the Jewish International Bankers. And may the Lord have mercy on us with the election of Ron Paul as the next President of the United States.