The Difference Between Putin And Obama 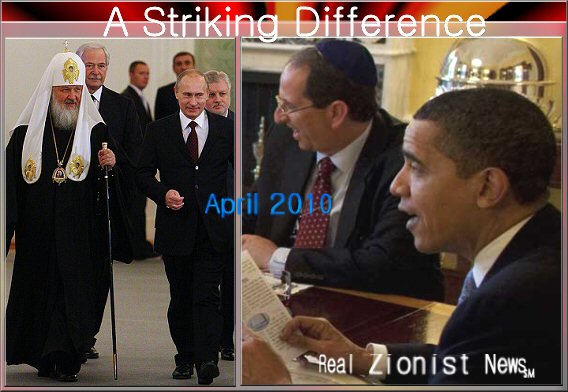 THE DIFFERENCE BETWEEN
PUTIN AND OBAMA 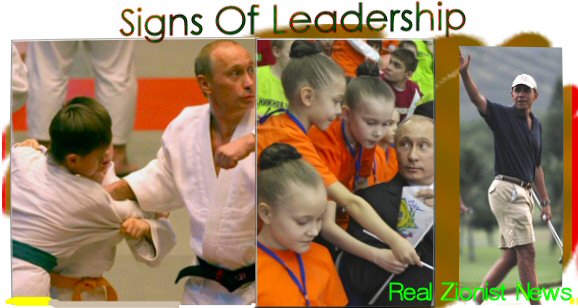 “A GREAT LEADER ATTRACTS GREAT PEOPLE AND HOLDS THEM TOGETHER,” said Von Goethe at the close of the 18th Century.

As we begin the 21st Century, two leaders in the public eye, Vladimir Putin, Prime Minister of Russia, and Barack Obama, President of the United States of America, are vying for world wide recognition. The difference between the two heads of state is strikingly dissimilar if not poles apart. 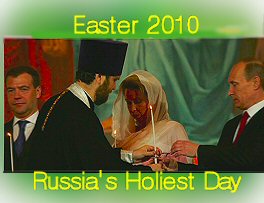 For instance, on April 4, 2010, Vladimir Putin brought his co-leader, Dimitri Medvedev, along with state photographers, to Easter Sunday services in Moscow, joining 4 million Russians in celebrating the nation’s holiest day of the year.

Following the service, Putin and Medvedev appeared on National Television to “congratulate” the Russian people for “celebrating the Resurrection of Christ.” View Entire Story Here & Here.

By contrast, Barack Obama did no photo-ops on Easter Sunday…no speeches. But rather, Obama brought a cadre of journalists and photographers on April 1, 2010, to a White House Jewish Passover Seder, complete with a myriad of his Jewish staff. 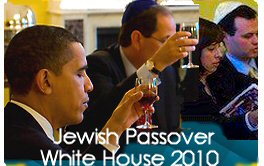 As Goethe pointed out, a great leader holds people together. Vladimir Putin is doing this very thing in a resurgent Christian Russia, whose Christian roots and heritage of many generations are being reestablished in that nation’s cultural and religious life.

But in America, a ONCE CHRISTIAN nation, Obama has forsaken America’s heritage. Instead, Obama brings a Hanukkah Menorah to the White House lawn during Christmas and a Jewish Passover Seder to the Oval Room during Easter… 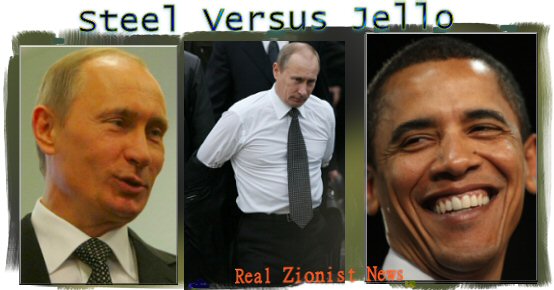 BEFORE MEETING WITH CLINTON at his country residence outside of Moscow on March 19, 2010, Prime Minister Vladimir Putin, all smiles, surprised reporters by announcing that Russia would soon start up its nuclear reactor in the Bushehr plant in Iran.

Although the start-up has been delayed several times, the remark seemed to catch Clinton off-guard. “We think it would be premature to go forward with any project at this time because we want to send an unequivocal message to the Iranians,” she told journalists.

Sergei Lavrov, Clinton’s counterpart as Russian Foreign Minister, insisted that despite the US Secretary of State’s objections, Moscow would go through with starting up the reactor.

Although Putin told Clinton that a sanction resolution against Iran “was possible” — at the same time, (all smiles) — the Prime Minister cautioned Clinton that sanctions “do not always resolve the issue and in some cases could be counterproductive.” In other words, behind Putin’s smile, is pure steel. View Entire Story Here & Here & Here.

By way of contrast in matters of foreign affairs, US President Barack Obama, (all smiles), in June 2009, demanded that Israel “freeze” all settlements in the occupied territories.

However, after huge pressure from 16 Jewish leaders from 14 Jewish organizations, (there are thousands of them), and Israel’s recalcitrance, Obama dropped his demand only 2 months later. View Entire Story Here & Here.

In other words, behind Obama’s smile, is pure jello.

IN HIS MISSION TO BUILD A CHRISTIAN SOCIETY, on February 8, 2010, Vladimir Putin banned a fictional television series which “dramatized” the lives of Moscow schoolchildren with scenes of rebellion and depravity.

The series showed schoolchildren openly smoking and drinking beer, harassing their classmates and snubbing teachers, and even having sex. 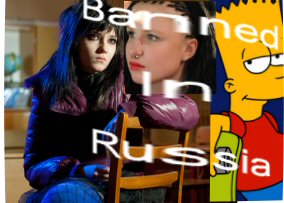 After much public protest from parents and teachers alike, the prime minister brought the program to an end. Putin, who also blocked the American programming of The Simpsons and South Park due to their “undermining of social mores,” then advised the station to produce a positive series on school life.

Working closely with Patriarch Kirill over the past year, Putin has arranged for the prelate to anchor his own television program, hold stadium meetings with Russian youth, and introduce a wide range of new Orthodox Christian curriculum in Russia’s public schools adding to the existing courses on Orthodoxy in spite of Jewish objections.

On the anniversary of the Patriarch’s enthronement, Putin congratulated the hierarch for expanding Orthodox Christianity both in Russian society and beyond its borders:

“Under your leadership, the influence of the Russian Church is growing not only in Russia but also abroad.

The Church’s dialogue with the public in solving social ills is notably expanding and is being filled with new content.” View Entire Story Here.

In close connection with Patriarch Kirill, Putin is providing funding to restore Christian sites and the return of properties seized from the Church in Soviet times. Together, the Prime Minister and the Patriarch are building churches and monasteries throughout Russia, with a special emphasis on bringing the youth into the Orthodox Christian community.

Sadly, however, in Obama’s ‘Jewish’ America, children in public schools are being taught homosexual perversity. (The Jewish Anti Defamation League is the prime promoter.) And the Christian Church has only a marginal influence (if even that) in America’s public life. 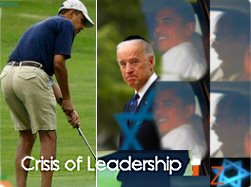 IF EVER AMERICA NEEDED A LEADER who could attract great people and no longer hordes of Zionist Jews who flood Obama’s administration, it is now.

And if ever America needed a captain of its society to hold the people together, it MUST be decided NOT in the next election — but within the psyche of the American people themselves.


And: Is Putin A True Christian Leader? Click Here