History Articles, How The Jews Prompted A German Backlash 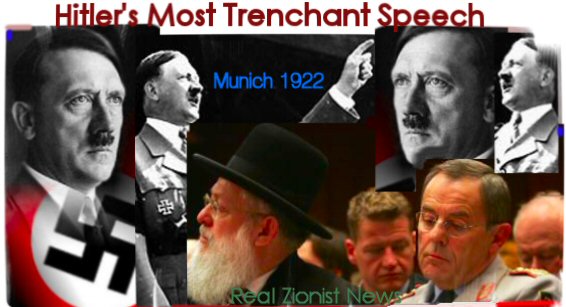 DESCRIBING JOHN TOLAND’S WRITINGS as being “scrupulously accurate,” the New York Times joined literary critics from around the world in praising the renowned historian’s works.

The Times’ acclamation of Toland included his biography Adolf Hitler…Zionism’s ultimate weapon in bludgeoning generation after generation into emotional, if not intellectual, submission.

Toland’s masterwork, Adolf Hitler, touted as the “definitive biography” of Germany’s dictator, outlines in detail many of Hitler’s speeches, beginning with those sponsored by the budding German Worker’s Party, (later changed by Hitler to include the term National Socialist), in the early 1920’s.

One such speech, “Free State or Slavery,” delivered by Hitler in 1922, Toland describes as Hitler’s “most trenchant speech.” A look up of the word for those not too familiar with it, shows it to mean ‘vigorous,’ ‘incisive,’ ‘effective’ and ‘sharply defined.’

Sadly, extremist Jewry owns the basic thought processes of most of the ‘Western mind’ by virtue of its total control of the mass media. We should also mention, what was even predicted by Hitler in 1944 as the war appeared lost, that Herzl’s demon seed, Zionism, has now achieved massive and essentially complete subjugation over the Western world.

The dominant NAMES are not Catholic, Methodist, Buddhist, or Hindu…they are ‘Jewish’ names. A quick check of our beleaguered planet today informs that a scant 0.2% of the world’s population refers to itself as ‘Jewish.’ There are only 7 million ‘Jews’ in Israel and slightly less than that number in the US.

Yet, despite their microscopic numbers on the planet, ‘Jews’ through unceasing media and political propaganda, mass mind control, blackmail, bribery, genocide, and many other ‘tools’ literally dominate and manipulate the destiny of dozens of key nations and their enormous populations.

Why when the word ‘Hitler’ is mentioned does the average person immediately become fearful and defensive at varying levels of consciousness and intellect? The answer is cradle-to-grave Zionist-Illuminati mind control…birthed and bred with the legend of the ‘Holocaust’ of WWII. 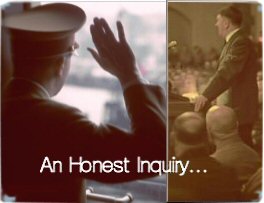 An honest inquiry demands that one start with the names…because the NAMES tell the story. Look at Wall Street, look at the Federal Reserve and dozens of other giant power centers.

So, in writing this column about the long dead and misunderstood dictator of Nazi Germany, how are we to be able to honestly and openly and objectively analyze what the man was SAYING and DOING through his speeches? If Hitler was the greatest ‘evil’ in all of history - as the extremist Jewish agenda states - how can it be that we TRULY know so little about him?

How many of you have even read a simple biography by a credible historian about him? Virtually no one has. At best, the average American has seen a Zionist agenda-backed short TV ‘documentary’ about him on The History Channel. Hardly a worthy way to study anything of such great magnitude. For the record, as any honest look at history is concerned, Stalin, for example, made Hitler look like a Boy Scout.

But back to the important subject of this essay: The speech by Adolf Hitler that his greatest biographer termed “Hitler’s most trenchant.”

The electric address has as its impetus events surrounding the assassination of the Jew, Walter Rathenau, German Foreign Minister, on June 24, 1922. As a result of the assassination, the Weimer government hastily passed the Law For The Protection Of The Republic, a Draconian decree designed to halt criticism of Weimar officials. (Sound familiar?) 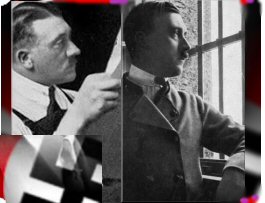 Opposition to the law came from German nationalists of all shadings. At the height of the controversy, Hitler was released from his 5-week term in jail where he reassessed his churning ideas into a more aggressive thrust. The future fuehrer wasted no time joining the protest on the very day of his release with his speech, “Free State or Slavery,” delivered on July 28, 1922 in Munich.

Hitler’s apparent target was the new law — but in fact — as Toland brings out: “the speech was a denunciation of the Jews and their plans to conquer the world. Never before had Hitler given such a reasonable explanation of how and why the Jews had gained such power.”

It behooves us to view specific excerpts from Hitler’s speech to decide if Toland has aptly described the speech as Hitler’s “reasonable explanation” of Jewry’s attainment of power in post World War I Germany…whether we agree or not with Hitler’s remarks…or Hitler himself.

HITLER’S SPEECH
AN INDICTMENT OF THE JEWS

“IT’S A BATTLE BEGUN 120 YEARS AGO,” the speech begins, “at the moment when the Jew was granted citizen rights in the European States.”

Hitler continues, “The emancipation of the Jews was the beginning of an attack on European society. For thereby full equality was given to a people that has always formed a State within the State.”

Hitler then proceeded to expose Jewry’s hegemony over Europe’s economy: “The process of industrialization meant the confluence of great masses of workmen in the cities. As industry grew, a fourth estate was formed. 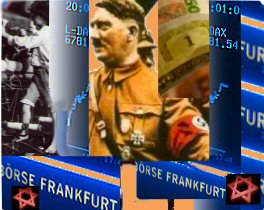 “The master-stroke of the Jew was to claim the leadership of the fourth estate: he founded the Movements both of the Social Democrats and the Communists. His policy was twofold: he had his ‘apostles’ in both political camps.

“Parallel with this was a gradual ‘moneyfication’ of the whole of the nation’s labor-strength. ‘Share-capital’ was in the ascendant and thus bit by bit the Stock Exchange came to control the whole national economy.”

Hitler then denounces the Gentiles who acted as “window dressing” for the Jews: “The directors of these institutions were without exception, Jews. I say ‘without exception,’ for the few non-Jews who had a share in them were nothing but shop-window Christians, whom one needs to keep up the appearance that these institutions were founded as a natural outcome of the needs of all peoples alike, and were not, as was the fact, institutions which correspond with the essential characteristics of the Jewish people.”

Next, Hitler denigrates Democracy as the means of Jewish ascendancy: “Under the concept of Democracy, it was possible to create a State-form by which the mastery over the herd by the Jewish intelligentsia who control the organs of information is guaranteed. Though small in numbers and therefore completely hidden in the body of the people, who quite unconscious of whom they were obeying, in the end did but serve the purposes of this small stratum of society.”

HITLER CONCLUDES HIS SPEECH by addressing the political controversy of the day: “The so-called ‘Law for the Protection of the Republic’ is nothing else than a means for reducing all criticism to silence. And what is the ultimate aim of Bolshevik Judaism in Germany? To make the nation defenseless in arms and to make the people defenseless in spirit. Two great aims!” View Entire Speech Here.

Indeed, gun control was an aggressive policy of the Weimar Republic as there was no Right to Bear Arms in the Constitution of 1919. To silence all dissent was to disarm the spirit of the German people.

In evaluating the “reasonableness” of Hitler’s speech, the question remains for freedom lovers today, have the Zionist extremist Jews (and their ‘normal’ Jewish followers) with their control of democracy and their command of the press made We The People “defenseless in spirit?” This is the question that every man’s conscience MUST confront. It would seem that the answer has become a tragic ‘yes.’

To study TRUE history is to LEARN from it…and that is one thing Zionism has targeted for absolute extinction.

And: Historian - ‘Did Hitler Have Reason To Hate The Jews?’ Click Here

And: The ‘Jewish Question’ Now A Global Issue Click Here

And: German Jews Demand ‘No Mercy’ For Demjanjuk Click Here