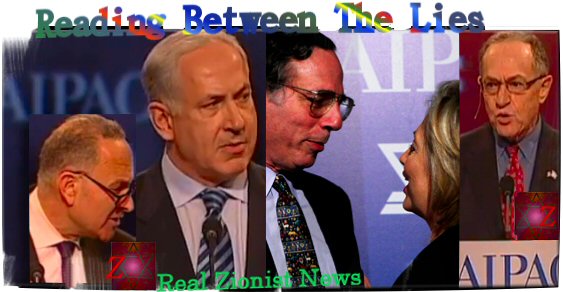 Unique Source: The Influence Of The Jewish Lobby Here

WITH ITS $80 MILLION HEADQUARTERS ON CAPITOL HILL and staff of 275, the American Israel Public Affairs Committee is a force no politician wishes to oppose.

At its March 22-24, 2010 annual “Policy Conference,” (”Demand Conference”), AIPAC was bombarded with Washington grovelers all trying to prove they are the bigger fan of Israel than the rest of the fawning pack of lawmakers.

Why? Because unlike any other organization, AIPAC has the power to end any politician’s career. 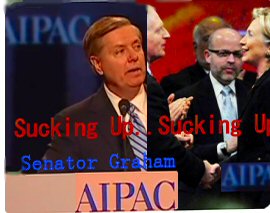 It is now commonly held knowledge in the Jew-controlled halls of Washington that if a politician ever speaks out for the rights of the Palestinians or even hints at Israel’s genocidal policies, this would mean the end of that lawmaker’s career.

Such a lawmaker would be shunned by his colleagues, making any legislation he proposes, particularly for his own state, almost impossible to get passed. 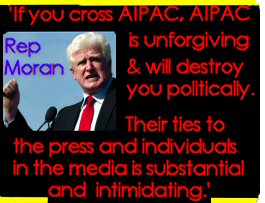 But more significantly, his opponent in the next election would be flooded with political donations and an advertising campaign that would either smear him — labeling the ‘offender’ a supporter of terrorism — or dredging up something ’scandalous’ from his past.

It happened to Alabama Congressman Earl Hilliard in 2002, a five-term incumbent who refused to sign an AIPAC-written House Resolution, a “pledge of allegiance” to the state of Israel. It nearly happened to Congressman Jim Moran in 2007 when he accused AIPAC of interfering with Congressional procedures and pointing to AIPAC as the primary agitator of the Iraq War.

Hilliard was defeated by a flood of pro-Israel money sent to his opponent, Arthur Davis. Over one million dollars of Davis’ campaign funding arrived just in the nick of time from New York City only thirty days before the primary. Hilliard said that most of the money came from AIPAC. 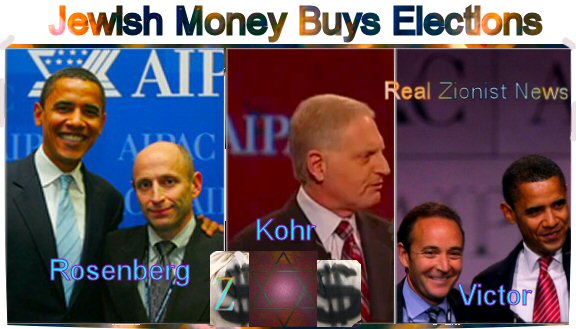 AIPAC DECIDES WHO GETS ELECTED

IN AN ALABAMA INTERVIEW, former Congressman Earl Hilliard brought to light the welding of the Jewish Lobbies with the Jewish-owned press and media:

The Black Commentator: The pro-Israel contributors made no secret of their support for your opponent, Arthur Davis. Was it their intention to make a public display of wealth?

Hilliard: Definitely - the seed of fear. It sends a message to every member of Congress. 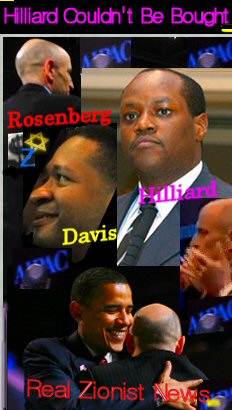 The Black Commentator: What is the message?

The Black Commentator: Did you sense you were in danger?

Hilliard: Let me tell you when I first realized I had a problem. Several people called me and told me that Davis was on national TV, MSNBC, CNN, and to turn on CNN and I could pick it up every hour.

I said, No, man, that guy doesn’t have that kind of money. So I turned on CNN. AIPAC was introducing him at a fundraiser for him in Washington.

The next day the papers reported that Davis raised $272,000 at another AIPAC fundraiser in New York. When I got that news, I had only $22,000. Almost immediately, the next ads started, and they didn’t stop. They only increased in intensity.

The Black Commentator: Did the ads attempt to smear you?

Hilliard: Oh yeah, they really did. The ads shifted between my Middle East stands and my domestic views. I had voted not to send people to prison for life without parole and AIPAC twisted that to say that I voted to let pedophiles out of jail. View Entire Story Here.

AIPAC PROVIDES AMERICAN JEWRY with an on-file active “profile” of Senators and Congressmen including their voting statistics and their chief opponents. AIPAC then advises their huge Jewish constituency which candidates to support and donate money to.

Senators like Lindsey Graham and Jim Risch, both featured speakers at the AIPAC Policy Conference this year — know where the money is, who shells it out, and what it takes to get it. 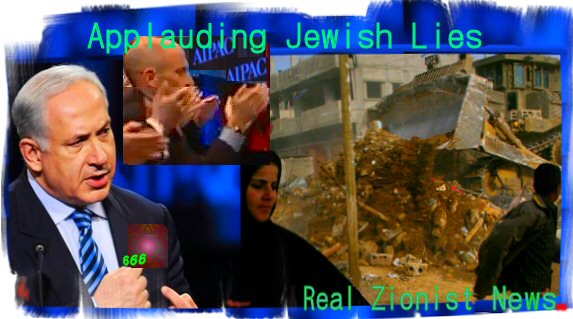 “JEWS HAVE BEEN CALLED THE POISONERS OF MANKIND, the fomenters of instability, the source of all evil under the sun,” shouted out Israeli Prime Minister Netanyahu in his address at the AIPAC gala dinner at the Washington Convention Center.

For once the world heard the truth being uttered by a Zionist Jew regarding the actual state of affairs vis a vis Jewry’s role in world history. But the lies were soon to come from the lips of Netanyahu.

As the international community does not recognize Jerusalem and the West Bank as valid Israeli land but rather as “occupied territory,” Netanyahu defied the entire world (but NOT 300 members of Congress who recently signed a vow of allegiance to Israel) by stating in his speech that Jerusalem belongs to Israel: 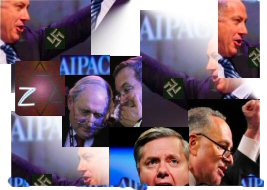 “Jerusalem is not a settlement. It is our capital. All these neighborhoods are within a five-minute drive from the Knesset.

Everyone knows that these neighborhoods will be part of Israel in any peace settlement. Therefore, building in them in no way precludes the possibility of a two-state solution.” View Entire Story Here & Here.

Let Netanyahu and his shills on Capitol Hill tell that to the thousands of Palestinians whose homes were stolen and then demolished by Jewish bulldozers and US dollars. In other words, when dealing with the Jews of AIPAC, one must learn to read between the lies…


And: Obeying The Zionist Line At AIPAC Click Here