Brother Nathanael Kapner: Can you give us some background information on the Anti Defamation League’s Hate Crimes Legislations?

Reverend Ted Pike: The ADL, like all powerful Jewish lobbies, can make or break an incumbent congressman or senator.

Coupled with their access to billions of Jewish dollars and their connections with the Jewish owned media, the ADL intimidates politicians with the threat of losing their seats and being smeared in the press if they do not agree to drafted-legislations which they promote as “model legislations.”

In other words, Jewish supremacists are making the laws of our nation, not our elected officials. Any dissent means political ruin by the vengeful, all-powerful Jewish lobby.

One of the ADL-drafted-legislations is the Federal Hate Crimes Bill known as the Matthew Shepard Hate Crimes Prevention Act. The bill was passed by Congress on October 22, 2009. Abraham Foxman, ADL’s director, hailed the passage as “a great day for America.”

Sadly, our elected officials are pressured by the ADL to continue these “great days for America.” The fact is, secular Jewish supremacy — led by the Anti Defamation League — is deeply entrenched in Washington, promoting its anti-Christian, anti-freedom, un-American agenda. Democrats especially are overtly complicit with the Zionist Occupied Government.

Br Nathanael: What is the import of the Federal Hate Crimes Law?

Ted Pike: The new Hate Crimes Law builds upon the Hate Crimes Law of 1968, inspired by civil rights legislation. This law criminalizes a violent action against a federally protected group. However, the law could not be enforced due to State & Local prerogatives which created barriers against federal intrusion.

However, the new law removes all barriers against federal intrusion of State & Local law enforcement rights. The Federal government can now go after anyone they want to for “hate” towards homosexuals, lesbians, and transgenders as specified in the bill — despite State & Local protection.

A Federal police state with absolute power has thus been created. Herein lies the attack on freedom of speech with a special bias against Christians who affirm the Biblical prohibitions against sexual perversion. The ultimate agenda of the ADL is to break down Christian conservative values in America.

Br Nathanael: What is the ADL’s latest effort in expanding their Federal Hate Crimes Law?

It claims to protect students who feel harassed because of their homosexual orientation or desire to be perceived as the opposite gender. If they feel pressured to the point that they don’t want to participate in a school activity, the bill says these students deserve the same federal advocacy given blacks under the Civil Rights Act of 1964.

Br Nathanael: Is there an indirect targeting of Christians who might affirm the Biblical prohibition against depraved sexuality in their dealings with fellow homosexual students?

Ted Pike: Yes. The bill includes special protection to heterosexual students who feel intimidated to not associate with homosexuals. These students may also invite federal prosecution of their “homophobic,” that is, CHRISTIAN, fellow students, teachers or parents.

HR 4530 says if school officials do nothing when they know a student is being harassed because of their homosexuality or heavily pressured not to associate with a homosexual student, these authorities face federal indictment.

State and local governments which do not educate and punish those who intimidate pro-gay students will lose federal funding. Thus Christian students, teachers or parents will be persecuted, their voice suppressed, then imprisoned if the offense continues.

Br Nathanael: Does the bill define “harassment” and “intimidation?”

Ted Pike: With malicious intent, The Student Nondiscrimination Act does not adequately define “harassment” or “intimidation.” If this bill passes, these ambiguous terms will be enshrined in federal law providing a pretext for persecution of Christian students and faculty.

Thus, under this act, homosexual students will decide when they’ve been sufficiently “harassed” or “intimidated.”

Br Nathanael: Does this mean that 6 year old students can initiate prosecution against a Christian who “harasses” or “intimidates” them?

Ted Pike: A grade school boy or girl who thinks they are victimized can persuade their local liberal, feminist or gay district attorney and summon the force of federal intervention.

If such “victimized” children want to launch civil lawsuits against students, parents or Church leaders, this bill makes it clear nothing will prevent them. This is exactly what the ADL is after - persecution of Christians. 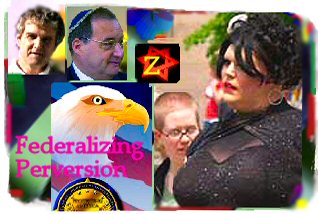 Br Nathanael: Are homosexuals, lesbians and transgenders actually being harassed in public schools?

Ted Pike: There is no evidence that widespread harassment of homosexuals in our public schools is an “especially severe problem” as the bill alleges—not with ADL-sponsored tolerance education abounding on campuses.

Br Nathanael: Having grown up in Judaism, it is considered a disgrace to the Jewish family if a son or daughter identifies as a homosexual or lesbian. What then is the ADL’s ultimate goal with this new legislation?

Ted Pike: The aim of the Anti Defamation League is to establish the federal government as the pro-homosexual educator and punisher of Christian opponents of homosexuality at every level of public schooling. HR 4530 amounts to federal endorsement of adolescent homosexuality as a legitimate, normal alternative.

The bill will flood government-sponsored educational programs into public schools to promote homosexual self-esteem. Its encouragement of homosexuality on the grade school level will destroy young consciences even before they have been formed. Indeed, the ADL will gain more ground in their attempt to sodomize America…


And: Obama’s Homosexual Agenda & The Jews Behind It Click Here

And: How The ‘US Hate Laws’ Will Change Our Lives Click Here