How The New ‘US Hate Laws’ Will Change Our Lives 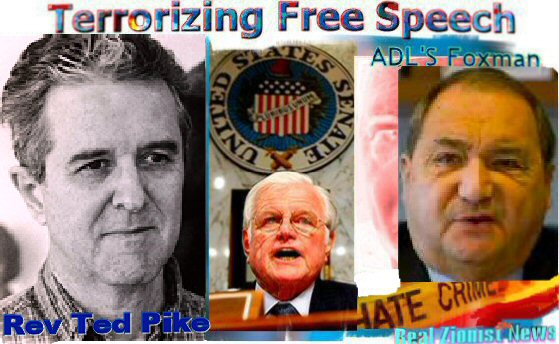 HOW THE NEW ‘US HATE LAWS’
WILL CHANGE OUR LIVES

For The Best US Hate Laws Coverage CLICK: TruthTellers.org Here

Reverend Pike, who is often featured on the Rense Radio Program, has played a key role in defeating federal hate crimes legislation in the past. This time it may be quite different…
_______________________
Brother Nathanael: On April 29, 2009, the US House of Representatives passed the Federal Hate Crimes Bill, HR 1913.

The Bill was approved despite compelling testimony by House Republicans who were constrained by a Democrat-imposed “closed rule” on debate and amendments which limited the debate to only one hour and twenty minutes.

Only the day before, apparently in co-ordination with House Democrats, Senator Edward “Ted” Kennedy introduced his Senate version of the Federal Hate Crimes Bill, S 909. If the Hate Crimes Bill is enacted into law, what are the implications for freedom of speech in America?

Reverend Ted Pike: The current Hate Crimes Bill builds upon the Hate Crimes Law of 1968, inspired by Lyndon Johnson’s civil rights legislation. This law criminalizes those who incite a crime committed against a targeted group. However, the law could not be enforced due to State & Local law enforcement prerogatives which created many barriers against federal intrusion.

BUT, the pending Hate Crimes Bill will remove all barriers against federal intrusion of State & Local law enforcement rights.

Thus, the Federal government can go after anyone they want to for both “hate” and “felonies” - despite State & Local protection. A Federal police state with absolute power will thus be created. Herein lies the attack on our freedoms, especially, freedom of speech.

Incidentally, the number chosen for the pending Hate Crimes Bill is “HR 1913.” Any number may be chosen, but why “1913?” I don’t think it’s an accident that this number was chosen by the Zionists. For in “1913,” three threats to our freedom occurred: The establishment of the Anti Defamation League (ADL), The Federal Income Tax, and the privately owned Federal Reserve Bank. Now the greatest of all threats is about to occur using this ominous date, “1913.” View Entire Story Here, Here & Here.

These groups will receive special federal protection in violation of both the 1st & 14th amendments. Thus, if the pending US Hate Crimes Bill becomes law, freedom of speech will be effectively annihilated in America once and for all. 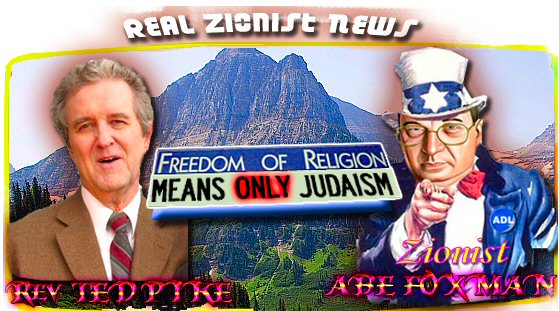 Br Nathanael: Why an “ADL-definition” of what constitutes hate? What does the Anti Defamation League have to do with the pending US Hate Crimes Laws?

Rev. Ted Pike: The Anti Defamation League of the B’nai B’rith, as it was formerly called, is behind it all, that’s why.

This super powerful Jewish religious, educational, fraternal, and charitable organization, that is, the B’nai B’rith, has persuaded 55 nations (in which it has 2100 lodges and 200,000 Jewish members) to unite under the authority of a central Hate Crimes command center. It is called the Organization for Security and Cooperation in Europe (OSCE).

The establishment of this international Hate Crimes organization by the B’nai B’rith is but the apex of their hate crimes agenda. Such descends to the community level via the civil rights arm of the B’nai B’rith, the Anti Defamation League.

Through their No Place For Hate & A World Of Difference programs in cities and communities throughout America, the ADL intensively organizes city governments, schools, modernist & Zionist-oriented churches, civic organizations, and citizen groups to combat “hate and homophobia” (Bible-Believing Christians) in their communities. The ADL has already infiltrated our public schools with their propaganda with various training and “educational” programs.

Indeed, a national and global hate crimes Gestapo is being created right before our very eyes, if we can only open them to see it. A “thought police” bureaucracy, led by the ADL, will soon harass and indict Christians and the politically incorrect here in America, as they now do in Canada.

Br Nathanael: Can you tell us more about the B’nai B’rith and their role in the pending US Hate Crimes legislation?

Rev. Ted Pike: Americans must understand that the ADL’s parent group, the B’nai B’rith, has established many “tolerance-oriented” lobby groups throughout the world in connection with various political & governmental spheres.

Organizations such as, B’nai B’rith Center for Human Rights and Public Policy, B’nai B’rith Office of United Nations Affairs, and B’nai B’rith Inter-American Convention Against Racism and Xenophobia, have maneuvered themselves into influential governmental realms.

The B’nai B’rith boasts of having established the Canadian hate laws bureaucracy in 1971. Of course, money and politics plays a big part in the operations of powerful lobby groups, like the B’nai B’rith lobby.

Br Nathanael: How did the ADL begin its campaign of promoting Hate Crime Laws?

Rev. Ted Pike: The ADL began its promotion of Hate Crime Laws worldwide in 1988 following the infamous Hofstra Conference through which the ADL formed their model “Anti-Hate” legislation proposals with the deception that their proposals only targeted “violent physical hate crimes.”

This is exactly what the ADL told lawmakers in Canada, Britain, and Sweden.

Yet, soon after the ADL’s Hate Bill was passed in those countries, it broadened to outlaw “verbal violence” against protected groups. Thus, laws to end “violent hate crimes” soon criminalized free speech.

Br Nathanael: What then is defined as “verbal violence?” And who defines what is “hate” in a person’s verbal articulations?

Rev. Ted Pike: Again, we must point to the Anti Defamation League as the culprit in defining that which constitutes “verbal violence” & “hate.” The ADL, which presently administers the US government’s Hate Crimes Enforcement Program, says that “hate equals bias” against federally protected groups.

Now, what document is most biased against homosexuality? The Holy Bible. Christians thus become potential “hate criminals.” And it is Christians in particular who are the ultimate target of ADL’s twisted and self-serving definitions of hate crimes.

Soon to follow homosexuals, will be another federally protected group, the Jews. Any person critical of the conduct of Jews, (even as the New Testament justly censors the conduct of unbelieving Jews), will be criminalized as perpetrators of “hate speech.”

Of course, this is what the ADL is really after, forbidding Christians and all Gentiles to articulate valid criticism against Jewish supremacists. 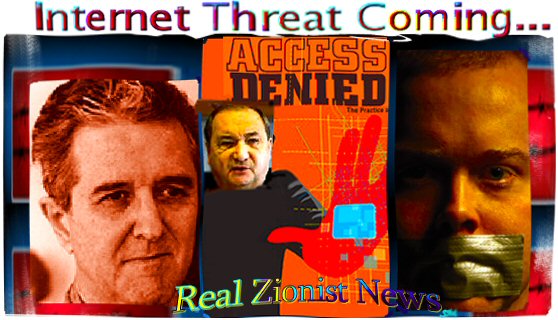 Br Nathanael: What about the Internet? Will the US Hate Crime Laws prohibit freedom of speech on the Internet?

This has happened already in Canada, England, France, Germany, and Australia with the establishment of ADL’s/B’nai B’rith’s, Department of Global Anti-Semitism in the US State Department, and a 55-nation Hate Crimes bureaucracy centered in Europe, the Organization for Security and Cooperation in Europe, as I mentioned earlier.

The threat to free speech on the Internet posed by these groups with their promotion of Hate Laws is an increasingly urgent subject for discussion on talk radio, especially for shows with Internet access.

Br Nathanael: Who will be targeted on the Internet by the Anti Defamation League?

Rev. Ted Pike: Internet talk radio hosts or Internet publicists who criticize homosexuality, Israel, or matters Jewish, will be targeted as “haters” according to the ADL’s International Network Against Cyberhate (INACH).

The purpose of this ADL entity is to implement legal, political, and technological means to end the free speech of such “haters” on the Internet. Quite recently, on March of 2009, INACH shut down a Catholic Website in the UK for being critical of “extremist Jews.”

Curiously, while the ADL/B’nai B’rith/INACH has no problem with the exercise of free speech by homosexuals and pornographers on the Internet, it has a huge problem with those who criticize all matters Jewish. 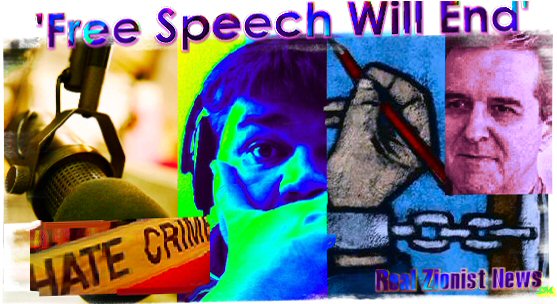 Br Nathanael: Are we headed for a Zionist-inspired police state?

Rev. Ted Pike: We certainly are. The pending US Hate Crimes Law creates a bias-motivation justice system for America, just like Canada’s. Suspicion of bias motivation behind a crime will justify federal invasion of local law enforcement as I discussed earlier. Such unity of federal and local jurisdiction is the definition of a police state.

And the powerful Jewish group, the ADL, with its Hate Crimes Training has already infiltrated hundreds of local police forces throughout the United States.

Br Nathanael: Is there a chance that the pending US Hate Crimes Bill, HR 1913, can still be defeated?

Rev. Ted Pike: Yes, there is still a chance, if we all do our part. You see, unlike the House, there is a very small margin of Democrats & Republicans in the Senate.

If public outrage is overwhelming enough this coming week, then there is a chance that several Democrats will come over and vote with the Republicans against the Hate Crimes Bill. This is what occurred two years ago due to the protests of concerned Americans.

During the recent mark-up in the House Judiciary, Republicans boldly discredited the Hate Crimes Bill as a “pedophile-protecting” Bill. This is documented in my recent video, Stop The Pedophile-Protecting Hate Bill.

Everyone should now protest to members of the Senate by calling Toll Free, 1-877-851-6437 or 202-225-3121, and say, “Please Don’t Vote For The Pedophile-Protecting Hate Bill, S-909!” I am calling everyone to demand hearings in the Senate Judiciary. This will slow down the passage and encourage Senate Republicans.

The Democrats had hoped to push through the Senate Hate Bill, S-909, as rapidly to passage as the House Bill was. But if a ground swell of protest continues this coming week, there is a very real chance that the Hate Bill can be defeated either by a filibuster or a majority vote against it. So, please call and protest NOW!