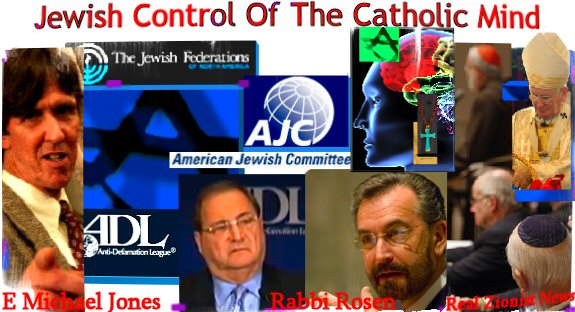 E. MICHAEL JONES, AUTHOR AND HISTORIAN, is a former professor at Saint Mary’s College in Indiana and the current publisher of Culture Wars Magazine.

As the author of several books, Jones’ later works focus on Jewish opposition to the Catholic Church throughout history and its pernicious effect on Western culture.

His masterwork, The Jewish Revolutionary Spirit, outlines through a tour of world history, Jewish strategies designed to oppose Christian society from the times of Christ to the present day. (Order Here.)

Brother Nathanael Kapner: Can you tell us of your own experiences in the scenario of Catholic-Jewish dialogue?

E. Michael Jones PhD: In the spring of 2009, I was asked to teach a course on the revolutionary Jew, based on my book, “The Jewish Revolutionary Spirit,” at the Little Flower Parish in South Bend, Indiana.

Every rabbi in town and the Jewish Federation called the Parish demanding that my invitation be revoked. I was then informed that my course would be replaced by a series of lectures on Jesus to be team-taught by a local rabbi and a Notre Dame grad with a Master’s Degree in Theology.

The text for the course was, “The Misunderstood Jew,” by Amy Jill Levine, a book which blasphemes Jesus Christ, contradicts the New Testament, and slanders the Catholic Church. One of Levine’s favorite topics, as featured in her talks at ADL conferences, is how the New Testament “infects congregations and classrooms around the world with anti-Semitism.”

This past winter, Bishop Kevin Rhoades was appointed to our diocese in Indiana. Rhoades had demanded that the renowned Catholic apologist, Dr. Robert Sungenis, cease from speaking about the Jews due to his “disruption” of Catholic-Jewish dialogue. If Bp. Rhoades is interested in how dialogue really works in his new diocese he should look into how my course was replaced.

Br. Nathanael: Is the dialogue between Jews and Catholics bearing any fruit?

E. Michael Jones: Only for the Jews.

For example, last January, Rabbi David Rosen, Director of the American Jewish Committee’s Department for Interreligious Affairs, told the Jerusalem Post that he would be “very surprised” if the Society of St. Pius X were readmitted to the Catholic Church due to Bp. Williamson’s ‘holocaust denial.’

Earlier, Rosen told the Post, “The embrace of an open Holocaust denier and the Society he represents, is shameful, a serious blow for Jewish-Vatican relations.”

Rabbi Rosen is now claiming veto power for the Jews in determining who is and who is not a good Catholic so as either to be admitted or shut out from the Church. In other words, dialogue has become the vehicle for Jewish control of the Catholic mind.

Br. Nathanael: What about maintaining good relations with the Jews?

E. Michael Jones: The Church can have unity or she can have good relations with the Jews. But she can’t have both.

JEWISH SUBVERSION OF THE CATHOLIC CHURCH

Br. Nathanael: Are Catholics beginning to react against Jewish control of the Catholic Church?

E. Michael Jones: Indeed they are. Our Bishops are beginning to as well. This is because dialogue has become a synonym for Jewish subversion of Church teaching.

After years of dialogue, the US Conference of Catholic Bishops under the direction of Cardinal Keeler, issued a joint Catholic Jewish statement in 2002 on “Covenant and Mission” which affirmed that Jews could be saved without accepting Christ as their saviour.

However, in June 2009 the same bishops had to issue a “clarification” which repudiated their own statement. It turns out that, upon reflection, the bishops concluded that the Mosaic covenant between God and the Jews was no longer “eternally valid,” and that Jews did have to convert if they wanted to be saved after all.

Br. Nathanael: You say that dialogue is a synonym for Jewish subversion of Catholic teaching. Are there any examples of this activity by organized Jewry?

E. Michael Jones: Yes. In spite of all the dialogue, Jewry’s hidden agenda to subvert the Church came to the fore recently.

On September 17, 2009, the Anti-Defamation League, the American Jewish Committee, B’nai B’rith International, the Central Conference of American Rabbis, Hadassah, the Jewish Council for Public Affairs, the National Council of Jewish Women, Na’amat USA, the Rabbinical Assembly, the Religious Action Center of Reform Judaism, and the Women of Reform Judaism, all signed a friend of the court brief demanding that Obama allow the Catholic Church no exemptions of “Right of Conscience” when it comes to hiring homosexuals. Jews allow for themselves “right of conscience” but will not allow it for Catholics.

The intent behind Jewry’s court brief to Obama is to create a fifth column within the Catholic Church, one which, because of the nature of its sexual activities, can be used to prompt a whole new series of lawsuits. With “Elder Brothers” like this, as Catholic-Jewish dialogue has defined the Jews, who needs enemies? View Entire Story Here & Here.

Br. Nathanael: How did Abraham Foxman of the ADL respond to the Bishops’ assertion that Jews must embrace Christ?

E. Michael Jones: Foxman was outraged by what he considered a volte face on dialogue. In September 2009, Foxman delivered a scathing denunciation of the Bishops’ clarification. But the simple fact remained: Whenever the bishops engaged in dialogue with the Jews, they repudiated the Gospel.

Conversely, when our Bishops acted on their own and reaffirmed the Gospel, they invariably outraged the Jews. This leads me to refine my previous statement: The Church can proclaim the Gospel or she can pursue good relations with the Jews. But she can’t do both.

Br. Nathanael: Why do you think the Jews become outraged at the preaching of the Gospel?

E. Michael Jones: Anyone who has read the Gospel of St. John or the Acts of the Apostles or St. Paul’s Epistle to the Thessalonians should know the answer. It’s because the Jews rejected Christ, and in rejecting Christ they rejected Logos, and in rejecting Logos — the Reason for the universe and its redemption — they became, not only as St. Paul puts it, “enemies of the entire human race,” but foes of the moral and political order of the universe. As a result, the Jews engage in continual anarchy against reason and truth, a decision they solemnly ratified when they chose Barabbas over Christ.

Br. Nathanael: Has there been any outrage towards you by the ADL due to your tremendous influence through Culture Wars Magazine amongst thousands of Catholics? 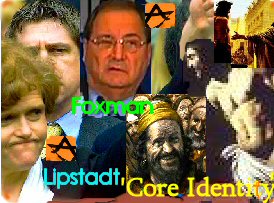 E. Michael Jones: In May 2009, following the appearance of my article, ”Deborah Lipstadt and Holocaust Denial,” Abraham Foxman, screech owl of the Anti Defamation League, put me on their Web Sites’ most wanted list. By calling me, in his typical use of propaganda against those who expose his lies and agenda, an “extremist,” Foxman sought to discredit me. But it didn’t work.

It didn’t work because Catholics are beginning to connect the dots. And if connecting the dots leaves us open to the charge of anti-Semitism, we simply respond by saying that correcting bad theology on the Jews is our way of helping them.

To put it another way, Culture Wars has broken the lock which has kept the Catholic mind under Jewish control for the past 40 years. Foxman now realizes that the Church is heading in the other direction on all of the issues that he and the Jews whom he represents consider crucial to their cause but ruinous to ours.

After 40 years of unprecedented advances in subversion and covert warfare, the Jews are finally starting to lose control of the Catholic mind.

And: Why The Jews Hate Jesus Christ Click Here