The Obama/Soros Plan To Destroy America 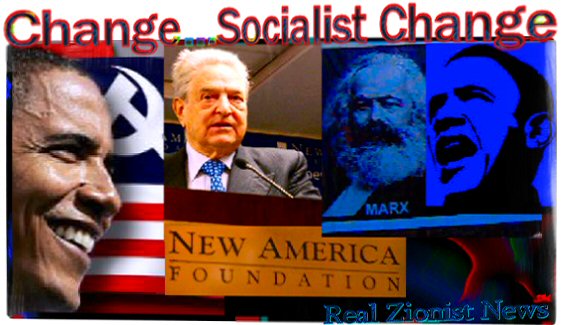 THE OBAMA/SOROS PLAN
TO DESTROY AMERICA 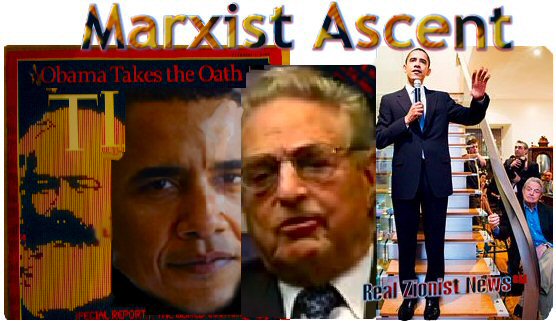 With his financial ability in the billions of dollars to back whatever cause he chooses and his powerful control of the media, Soros has the means to engineer the political and economic destinies of entire nations. Indeed, Soros has already implemented his global agenda in both Georgia and Kosovo.

The latest “cause” backed by Soros is the Obama presidency. Known as Obama’s “money man,” Soros’s involvement with Obama’s national political career began in 2005 with Soros fundraising for Obama’s campaign for US Senate and continued through the 2007 Presidential campaign launch with huge fundraising operations managed by Soros.

Soros, a proponent of the “hard left,” has also been funneling money into the Democratic Party and to its candidates with the intent on building a slate of Senators and Representatives with socialist leanings. “George Soros has purchased the Democratic Party,” said Republican National Committee spokeswoman, Christine Iverson, “and he who pays the piper calls the tune.”

Through his Open Society Institute, Soros has contributed to left wing socialist groups such as, Human Rights Watch, Jewish Council for Public Affairs, The New American Foundation, ACORN, MoveOn, and his own, Center For American Progress, of which, Obama recently appointed its senior fellow, Todd Stern, as his ‘Climate Czar.’ Stern, a Zionist Jew, is the chief architect of the socialist-inspired Climate Change Bill, just passed by Congress.

George Soros now has a superhighway to Change – ‘Socialist Change.’ We are already beginning to see the largest growth in government in the history of America. Hell-bent on destroying the American dollar and installing a global currency, Soros has got his bought-and-paid-for White House stooge now installing his socialist agenda.

FOR IN HIS FIRST 100 DAYS as president, Obama has passed a flurry of deficit-deepening legislations such as the Stimulus Bill, the Equal Pay Bill, the Global Poverty Bill, the Tobacco Bill, the Climate Change Bill, and his upcoming Health Reform Bill. These will bring an already bankrupt America into a deficit of $2 trillion dollars including interest on the debt, paid to the Zionist Jews who own the Federal Reserve Bank. Obama’s next plan is to pass a UN sponsored Bill which will force Americans to pay a global tax. View Entire Story Here & Here.

And who will be the ruling elite of the socialist American state now in the making? Wealthy and powerful Jews - like George Soros - who have eliminated all capitalist power blocs that would oppose them. And with Obama’s creeping socialism becoming more and more apparent, George Soros emerges as the chief mogul behind Obama’s Marxist policies. 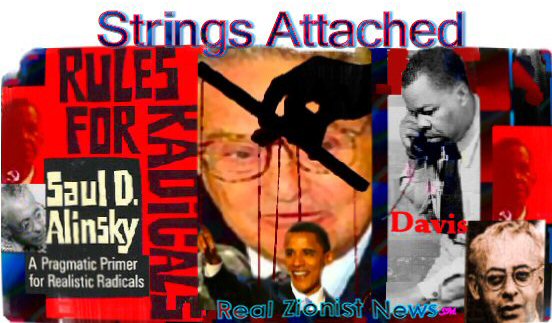 In his book, Dreams From My Father, Obama admits developing a close relationship, “almost like a son,” with Davis in 1977, whom he repeatedly refers to as “Frank.” Writing about attending “socialist conferences” and coming into contact with Marxist literature, Obama reminisces of listening to Frank’s “poetry” and getting advice on his career path.

One particular piece of Marxist literature, Rules for Radicals, penned by the Chicago Marxist Jew, Saul Alinsky, had oft been quoted by Obama in campaign speeches during his run for a State Senate seat in Illinois in 1996.

Obama’s embrace of the ideology of Saul Alinsky began when he was 24 years old, unmarried, very accustomed to a vagabond existence, and according to his memoirs, Dreams From My Father, was searching for a genuine African-American community.

White leftists of the Developing Communities Project of Chicago were looking for someone who could recruit in a black neighborhood in the south side of Chicago. Obama answered their Help-Wanted ad and soon took up a paid position as a community organizer. The Developing Communities Project was built on the Alinsky model of community agitation, wherein paid organizers learned how to “rub raw the sores of discontent.”

“The agitator’s job,” according to Alinsky, “is first to bring folks to the realization that they are indeed miserable, that their misery is the fault of unresponsive governments and greedy corporations, then help them to bond together to demand what they think they deserve.”

As a confirmed atheist, Alinsky saw an opportunity to cynically spread his socialist ideology in already-formed church communities as being the perfect springboards for agitation and creating bonds for their demands.

WHEN OBAMA FIRST UNDERTOOK HIS AGITATION WORK, he was un-churched. But to fulfill the Alinsky manifesto, Obama joined a huge black nationalist church, whose pastor, Reverend Jeremiah Wright, (whom Obama called his spiritual mentor), preached a “black” gospel. Denouncing white supremacy and decrying black inferiority, Wright would intone from the pulpit: “GAWD! Has GOT! To be SICK! OF THIS S**T!” View Entire Story Here & Here.

In 1996, Obama received the endorsement of the Chicago branch of the Democratic Socialists of America (DSA) for an Illinois State Senate seat. Later, the Chicago DSA newsletter reported that Obama, as a State Senator, showed up to eulogize the Jew, Saul Mendelson, one of the “champions” of “Chicago’s democratic left.”

The Democratic Socialists of America is the principal US affiliate of the Socialist International, which enjoys a “consultative status” with the United Nations. This international connection is significant because two of Obama’s recent legislations, The Global Poverty Act, and The Climate Change Bill, are both pieces of the UN’s socialist agenda to siphon the wealth of Western nations to Third World Muslim countries and ultimately, to implement its plan for a socialist World Government. 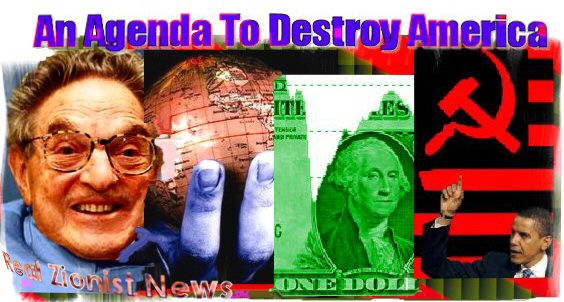 SOROS WAS BORN OF JEWISH PARENTS IN BUDAPEST IN 1930 as Gyorgy Schwartz. When young Gyorgy Schwartz enrolled at the Fabian socialist London School of Economics in 1949 he changed his surname to Soros. At the London School of Economics he became friends with Marxist philosopher Sir Karl Popper, founder of the Association of Socialist School Students and author of the 1945 book, The Open Society And Its Enemies.

In 1956, in an “open society” of America, of which Soros now wishes to expand into a “borderless society,” young George Soros arrived on Wall Street with $5,000 and quickly demonstrated a Jewish “knack” for investing other people’s money.

Soros soon came to be called “the greatest money manager in the world” by satisfied clients of his multi-billionaire international hedge fund called the Quantum Fund. Today, Forbes Magazine ranks him the 28th richest person in the United States, with an estimated fortune worth $7 billion.

In 1993, Soros established the US branch of his Open Society Institute as a “tax-free” foundation to support his socialist foundations in Central and Eastern Europe. The President of the Open Society Institute is the Jew, Aryeh Neier, who as Director of the Socialist League For Industrial Democracy, personally created the radical group Students For A Democratic Society in 1959.

Though he likes to be considered a “stateless statesman,” Soros, in fact, is more accurately described as the “Godfather of World Socialism.” For through his Open Society Institute, Soros funds an army of socialist organizations that advocate abortion, open borders, amnesty for illegal aliens, a global currency, prevention of global warming, and a world poverty tax. View Entire Story Here.

Again, two of Obama’s recent legislations, The Global Poverty Act, and The Climate Change Bill, are both pieces which are consonant with the George Soros agenda.

OBAMA’S SOCIALIST CONNECTIONS EXPLAINS WHY he has libertine views on sexual matters such as abortion and homosexuality.

One of Obama’s first actions in office was to issue an executive order authorizing federal funds for pro-abortion groups that operate globally. Obama supports the Freedom of Choice Act, which would make abortion an entitlement that the government could not limit.

This falls in line with the socialist agenda of George Soros, the “puppeteer” pulling the strings of his “puppet,” Barack Obama. Among Soros’s demands are to make abortions freely available and to legalize gay marriages. Soros also demands full rights for illegal aliens and felons, as well as the legalization of euthanasia for the “infirm.” And, oh yes, Soros demands the end of US global supremacy through a borderless society.

Unless we wake up soon, our “infirm” nation will soon be put to an eternal sleep by Barack Obama & George Soros, SOCIALISTS, who now run a Marxist White House…

And: 3 Goals Of The New World Order Jews Click Here