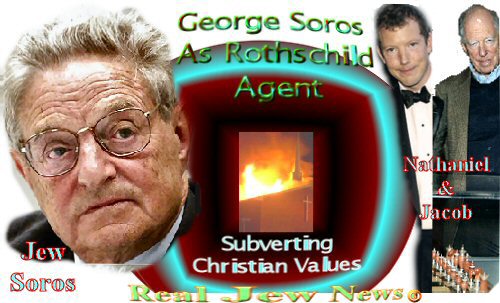 Excerpted From: The Rothschild Octopus, Vlada Sindjelic Here;
& Crimes Of George Soros Here.
GEORGE SOROS IS a Hungarian Jew. Soros was born in Budapest in 1930 as Gyorgy Schwartz.

When young Gyorgy Schwartz enrolled in the London School of Economics in 1947 he changed his surname to Soros. In 1956 Soros settled in NYC. George Soros then built his multi-billionaire international hedge fund called the Quantum Fund.

Geroge Soros is known for saving George Bush Jr from a 1990 bankruptcy. Soros still works with Bush Sr in the Carlyle Group a powerful financial organization & international weapons dealer controlled by the Rothschilds who own Vickers Munitions Here.

Soros has been equally active in many changes of governments throughout the world including the overthrow of Georgian President Eduard Shevardnadze in 2003 a devout Orthodox Christian.

An area of interest for Soros is “rights for prostitutes.” This is part of his efforts to subvert traditional Christian values and undermine America’s families.

SOROS BUILT HIS ROTHSCHILD ALLIANCE through these Jews:

Richard Katz: Former head of Rothschild Italia and an officer of NM Rothschild & Sons in London. Katz is now a member of Soros’ Quantum Fund committee.

SOROS AS ROTHSCHILD AGENT IN THE BALKANS

PREPARING THE GROUND for the Rothschilds to control the Balkans, Soros works through his Serbian organizations to undermine historic Serbian Christian society.

Soros is seeking to drive out of Serbia the Serbian Orthodox Church, the Serbian language, the Cyrillic alphabet, Serbian history, and Serbian nationalism Here.

In the early 1990’s, Soros launched his 3 Anti-Christian organizations in Serbia: The Open Society Fund, The Helsinki Committee, and The Serbian Centre for Anti-War Action, in order to undermine Christian society in Serbia. This was strategically done by Soros at the very outset of the fall of communism in Russia.

SOROS HAS BEEN OPERATING his Kosovo Foundation For Open Society for over 10 years in an effort to usurp Serbian Christian culture in Kosovo & support the drug-running Muslim KLA.

Because of his “Quantum Fund” that does business in Kosovo along with his weapons-dealing Carlyle Group, Soros wants to be free of any constraints by the Putin-sponsored Serbs.

An independent Muslim Kosovo is also in the interest of the Rothschilds because it is the “Serbian Kuwait” with its enormous reserves of lead, zinc, gold, and coal. Soros has invested millions of dollars through his International Crisis Group in an effort to possess Trepca for the Rothschilds a rich mining area in Kosovo. Oil interests also figure into an independent Kosovo for Soros and the Rothschilds Here.

Kosovo’s independence from Serbia is crucial to the interests of the Rothschilds’ mining companies since it would give them clear passage for snatching mineral wealth away from Christian Serbia and its sponsor state, Putin’s Christian Russia.

Indeed: Soros & The Rothschilds Wage War Against Christianity
With Their Billions Of Dollars!
THEY MUST BE STOPPED BY OUR CHRISTIAN WITNESS NOW!
__________________________
For More See: “3 Goals Of The New World Order Jews” Click Here