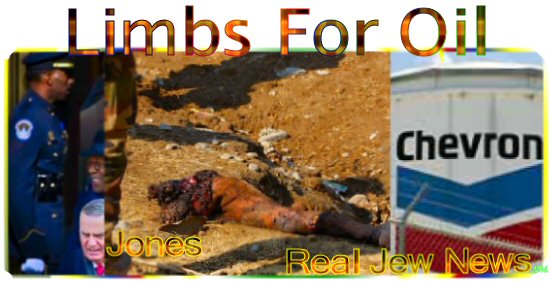 Jones, who as NATO supreme commander in 2006, advocated broadening the Afghan war across Pakistan’s border, was recently the Director of Chevron Oil and head of the powerful energy lobby group, the Institute For 21st Century Energy.

Jones says that America must seek new energy sources to ensure its “security:”

And that “energy challenge” for both America and its partner, the rogue state of Israel, is to send soldiers to target “energy areas” for the sake of “security.”

As regards Obama’s plan to escalate the war in Afghanistan, many argue that possession of oil is the motivation behind Obama’s mission to “catch” Osama Bin Laden. 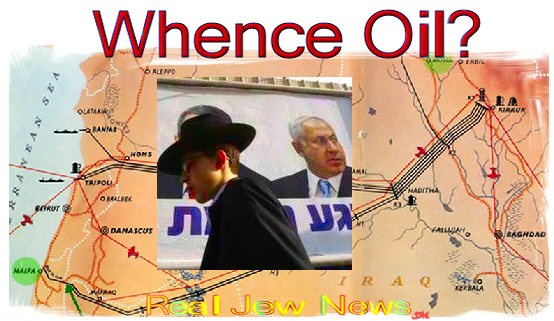 “WHERE DOES ISRAEL GET ITS OIL?” is asked by many global energy observers. According to Israel’s Fuel Authority, Israel imports a small percentage of oil from Egypt, West Africa, Ukraine, Georgia, and Mexico. At the same time, 90% of Israel’s oil imports comes from Russia and the Caspian region below Afghanistan.

“A huge percentage of the world’s oil reserves, and this shows you where oil dependency is going to come from in the future, is found in the possession of powers not friendly to Israel or the West. Therefore it is difficult to trust them.

Iran’s growing influence is becoming more pronounced within all of this. Oil is financing Iran’s actions everywhere, including Hezbollah’s activities. Iran itself has about 10 percent of the world’s oil reserves. Iran may also have influence on oil found in other areas in the future, such as in southern Iraq.

Iraq also has roughly 10% of the world’s oil reserves - and it’s not certain at this stage which direction Iraq will take: toward a democracy with diplomatic ties with Israel, or in the direction of extremism.” View Entire Story Here.

Should the US end up controlling Iraq, permanent military bases would then be established. Iraq, as America’s vassal state, would control the 2nd largest oil reserves in the world, and Israel would be a partner in this endeavor. 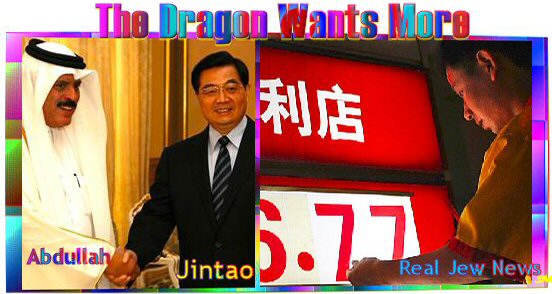 “CHINA IS THE FASTEST GROWING WORLD ECONOMY,” reports the Energy Information Administration of America. Over the past decades, China has increased its energy consumption significantly in its share of total world energy.

In 1980, China accounted for less than 8 percent of the world’s total energy consumption. In 2005, its share had grown to 14 percent. By 2030, China’s share will increase to 30%. China is currently the second largest oil consumer, right behind the US, as it continues its industrial expansion as America’s manufacturer of once “Made In America” goods.

Fearing China as a threat in competing for expanded energy sources, the Zionist West is making plans to undermine China’s power. Political analyst, Webster Tarpley of Rense.com, points out in his treatise, Power Shift, that the new elite in control of Obama’s defense policies, led by Robert Gates and Zbigniew Brzezinski, are strategizing to weaken China’s influence both in Pakistan and in oil rich Iran. “China,” says Tarpley and other geopolitical experts, “is the number one oil importer from Iran and is interested in a militarily strong Iran that dominates the Persian Gulf.”

China and Iran are bound by energy and weapon deals such as Chinese supplied anti-ship cruise missiles which pose a threat to American naval vessels operating in the Persian Gulf. While the Zionist West has been forging a diplomatic strategy to halt Iran’s nuclear program, China signed its largest energy deal with Iran in October of 2004 and promised to block any American & Israeli attempts to stop Iran’s nuclear program.

A key component of China’s strategy to guarantee access to Persian Gulf oil is the energy co-operation efforts it has cultivated with Saudi Arabia. In 2007, Saudi King Abdullah traveled to China for his first foreign visit after assuming the throne. The trip was characterized as a “watershed” signaling that Saudi Arabia’s future involved “being much closer to Asia.”

Continued deterioration in Saudi-American relations, now intensified by Israel’s barbaric Gaza invasion, could drive the Saudis to end their reliance on the US as the sole guarantor of their security and offer China an expanded role. 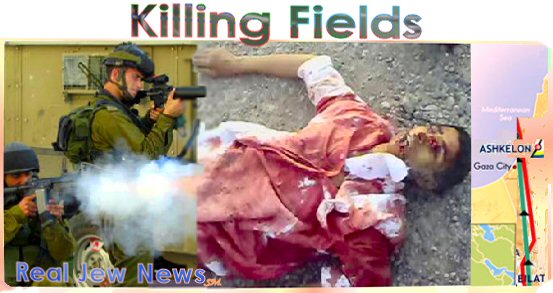 A LITTLE KNOWN ISRAELI OIL PIPELINE running from Ashkelon directly above the Gaza Strip to the southern tip of Israel in Eilat, is the key component of Israel’s recent invasion of Gaza.

The pipeline, which has a capacity of 400,000 barrels a day, is known both as the Eilat-Ashkelon Pipeline and the Trans-Israel Pipeline (TIP). Israel hopes that TIP will rival the Suez Canal as an oil shipment route between Caspian producers and Asian markets.

Much of the transiting oil that Israel seeks would be shipped through Georgia and then from Black Sea ports to Ashkelon, pumped to Eilat and reloaded onto tankers to be shipped eastward to markets in Asia.

But Israel’s TIP pipeline, which operates sporadically, fears possession by the Palestinians, who as former Ashkelon residents, (now imprisoned in Gaza), could take over the pipeline in a “right of return” scenario. By dismantling the Gazan government infrastructure, Israel hopes to solve the threat by a campaign of ethnic cleansing of the Palestinians. View Entire Story Here & Here. 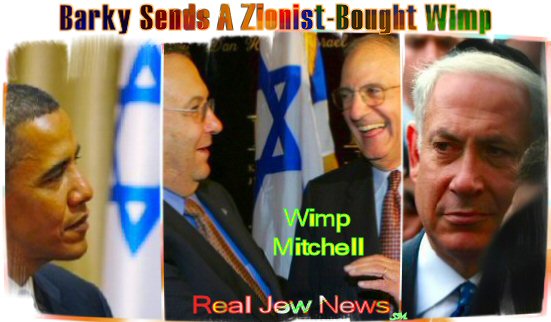 On January 30, 2009, Obama’s Middle East envoy, George Mitchell, completed his Middle East negotiations in a meeting with Likud leader, Benjamin Netanyahu. Avoiding the issue of the Gaza invasion, (and stalling future talks), Netanyahu insisted that “talks can only continue when Iran’s influence in Palestinian affairs is countered.”

Evidently, Mitchell is no match for the fox, Netanyahu. And even more obvious, is the power of the Jews to dictate to America, (and American Zionist-puppet-presidents like Obama), its own terms and its own wicked Zionist agenda.