The economic team includes the Zionist Jewish banker, Robert Rubin. Many Washington insiders believe that Volcker will be Obama’s pick for Treasury Secretary.

As CS Lewis said in his famous book, The Screwtape Letters: “the safest road to Hell is the gradual one.” 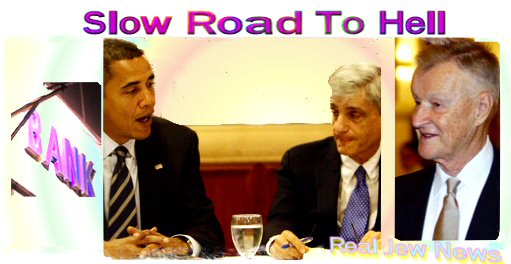 ZIONIST JEW HERBERT GRUBEL of the Fraser Institute Of Canada recently proposed a “North American Central Bank” as part of a monetary union between America, Canada, & Mexico. Here’s what Grubel stated in his article, “The Case For The Amero:”

A Zionist “think tank” known as the Center For Strategic And International Studies (CSIS) is pressing for “regional integration” to implement a North American Central Bank in stages. This is stated in their North American Future 2025 Project Report.

Zionist Jews literally flood the roster of “expert members” of the CSIS. And Obama’s foreign policy advisor, Zbigniew Brzezinski, is listed as a CSIS “Counselor & Trustee.”

Brzezinski recently articulated his globalist “slow road to hell,” saying, “We cannot leap into world government in one quick step. The precondition for globalization is progressive regionalization.”

Zionists will cause the dollar to be devalued to the point where Americans will accept regionalization as Obama’s solution for dollar recovery. In fact, Obama’s globalist slow road to hell is already being built. Just “read his adviser’s lips…”