Will Obama Continue The ‘Israeli Lie?’ 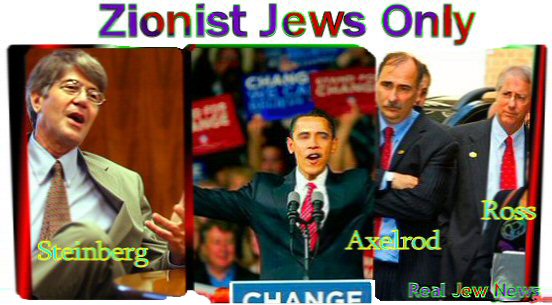 “ONLY JEWS MAKE UP OBAMA’S NEW MIDDLE EAST TEAM,” reported an outspoken journalist for the New York Times, on January 11, 2009.

Cohen points out that there are no Arabs on Obama’s Middle East negotiating team. And in response to the adulatory articles on Ross’ appointment as “one who can effect major renewal of US policy,” Cohen asks the question: “I wonder about the capacity for “major renewal” of someone who has failed for so long.”

Recognizing the imbalance of only Jews being on the negotiating team, Obama announced the appointment of former Senator, George Mitchell, as his “Middle East envoy.” Obama will be sending Mitchell to meet with Israeli leaders & Palestinian President Mahmoud Abbas.

Obama mentions nothing about the Gaza invasion (and the slaughter of civilians by Israel), nor any negotiations with Hamas & Hezboullah, (the real players in the Palestinian-Israeli conflict). But rather, it’s the same old players involved in the “negotiating process” by which Israel always gets its way.

JUST PRIOR TO THE ESTABLISHMENT OF THE RACIST STATE OF ISRAEL IN 1948, Secretary of State, George C Marshall, warned President Harry Truman that “support for Israel would guarantee that the Palestine problem would be permanent and still more complicated in the future.”

In a memo to Truman regarding the “political pressures” by Jewish strong-arming, Marshall argued:

“The political pressures to which America is now subjected will impel us toward an injurious position where we would shoulder major responsibility for the maintenance, and even the expansion, of a Jewish state in Palestine.

If we do not effect a radical reversal of our policy to date, we will end up being ourselves militarily responsible for the protection of the Jewish population in Palestine against the declared hostility of the Arab world.” View Entire Story Here & Here.

In the end, Truman, who needed Jewish votes & Jewish money for his upcoming re-election bid in November of 1948, caved under Jewish pressure, when he recognized the rogue state of Israel on May 14, 1948.

THE POWER OF THE JEWISH LOBBY

DESPITE THE FACT THAT JEWS make up less than 2% of the US population, the Jewish Lobby in America, represented primarily by the American Israel Public Affairs Committee (AIPAC), has managed to hijack the foreign policies of the US government.

In their best selling book, The Israel Lobby And US Foreign Policy, John Mearsheimer and Stephen Walt demonstrate that aid for Israel is NOT in America’s best interest:

“The overall thrust of US policy in the Middle East is due almost entirely to the activities of the Israel Lobby. The Israel Lobby has managed to divert US foreign policy far from what American national interest would otherwise suggest.

Generous aid to Israel might be justified if America received substantial benefits in return. If Israel possessed vital natural resources such as oil or natural gas, or if it occupied a critical geographic location, then the US might want to provide support in order to maintain good relations and keep it out of unfriendly hands.

Israel’s strategic value to the United States would be further enhanced if backing it won America additional friends around the world and did not undermine US relations with other strategically important countries.” View Entire Story Here.

Along with underlining the global “Anti-Americanism” caused by US support for Israel, Mearsheimer & Walt question the argument that Israel is a true ally of America. For in 2004, the authors write, a key Pentagon official, Larry Franklin, a Zionist Jew, was arrested on charges of passing classified information regarding US policy toward Iran to an Israeli diplomat, with the assistance of two senior AIPAC officials, Steven Rosen and Keith Weisman.

Franklin accepted a plea bargain and was sentenced to only twelve years in prison. But Rosen and Weisman, owing to AIPAC’s political & financial clout in Washington, remain free. View Background On The Story Here.

In a recent article by Stephen Walt, he states that although Israel could use some “honest advice” regarding its military ventures, the Israel Lobby has “handcuffed the democratic process” in America by pre-empting open discussion. “Israel’s supporters,” observes Walt, “make it impossible for Washington to do anything but reflexively back Israel’s actions, whether they make sense or not.”

Making “sense” out of Israel NOT being in America’s best interest can be boiled down to this: “pandering to the Israel Lobby equals votes.” All US politicians must conform to the Jewish agenda or their political careers are aborted by the all-powerful Jews. And this political reality, Obama knows only too well…