THE DOMINATION OF JEWRY OVER AMERICA is now complete.

Jews are in control of every sphere of America’s infrastructure. The 3 major areas of Jewry’s victory over the American people are 1) Banking; 2) Politics; & 3) Education.

To understand what a “victory” over the Gentiles in America means for the Jews, a simple equation is all that is needed. Jewry wishes to enslave the Gentiles to its own agenda & to eradicate any particularism unique to Gentile culture.

One of the “particulars” of Gentile culture has been their historical allegiance to the Christian faith and the national customs bound up with that faith. America was once known as a “Christian” nation with a distinct “Christian” culture.

But the Zionist Jews, through their infiltration of academia and the press, have turned America into a secular nation. Yet “secularism” is just another name for “judaism.”

For in a secular society, in which any particular Gentile strain has been diluted, Jewry can promote their Jewish propaganda, UNCHALLENGED, to its maximum effect. This is why the American people have been instilled with a sense of “Gentile guilt” given Jewry’s promotion of the so-called “Holocaust” - which has been proven to be yet another Jewish hoax.

Having grown up as a Jew in an upper middle class synagogue, (I am now an Orthodox Christian), I sometimes look upon the Gentile people of America with heartfelt pity.

How I wish that Gentiles could see that their culture, their Christian heritage, & their genealogical roots have been robbed from them by Jewry’s plan to take over the world. “Wake up Gentiles!” I continually say to myself, “Jewry has stolen even your ancestral blood and mixed it with a foreign, poisonous tincture.” 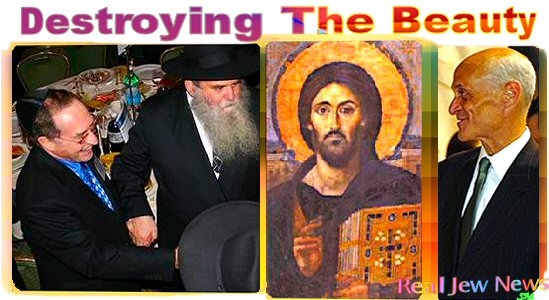 Jewry’s victory over America is now complete. The alien domination of an elite, self-conscious group, who see the world in terms of “us” & “them,” has flowed into every pore of American society with its Anti-Christian views.

On this day of Christmas in which we celebrate the birth of Jesus Christ — Who came to restore the original beauty of man — we must all go into mourning rather than exultation. For the name of the most beautiful person ever born is hated, vilified, mocked, and now made “politically incorrect” & in many instances, even “illegal,” by the Jews.

Are we capable of sacrifice dear Americans? For only through imitating Christ’s selfless sacrifice for us by being the salt of the earth, as He taught us to be, can we overturn Jewry’s now complete victory over America.

And: Reclaiming America’s “National” Indentity From The Jews Click Here