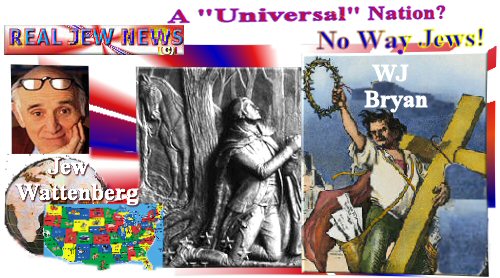 This is why Jews disseminate putrid propaganda such as by the Jew, Ben Wattenberg, of the American Enterprise Institute, a Jewish-Neocon lobby:

— “America is the Great Melting Pot where all races are melting and re-forming. Some Anglos fear that America will become a Third World nation. But not to worry. We’re becoming the first universal nation.” — “Melt, Melting, Melted,” Jewish World Review, March 19 2001.

Jews like Wattenberg are indeed “universalists.” For Jews wage war on the Christian-Biblical concept of nations: “Blessed is the nation whose God is the Lord.” (Psalm 33)

Jews like Wattenberg wish to create a New World Order with Jews in charge *not* the Lord Jesus Christ. This is the essence of Jewish “messianism” which envisions a carnal “messiah” or a “messianic age.”

But all of this means that Jews with their Jewish world view of “diversity,” (yet Jews remain powerfully “uniform!”), will be in charge. 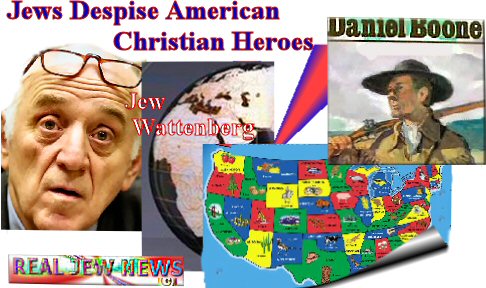 WHY JEWS DESPISE THE IDEA OF AMERICAN “NATIONHOOD”

Here are 3 reason why Jews wage war on American nationalism:

1) The soul of the American nation is built *not* upon ideals such as the Jew-promoted ideas of “democracy” & “equality for all men.” But rather on our common memory of America’s Christian roots, Her heroes, and a shared hope in Christ’s Providential care.

~~ But Jews despise Christianity and hate the Lord Jesus Christ! ~~

2) The soul of the American nation is built upon love for America’s soil upon which Her heroes fought for freedom. These heroes were Christians such as George Washington, Patrick Henry, Jonathan Edwards, Davy Crockett, Daniel Boone, Fanny Crosby, William Jennings Bryan, and Louis T. McFadden.

~~ But Jews despise Christian heroes and their love of the Christian cause! ~~

HOW CAN WE RECLAIM AMERICA’S
“NATIONAL” IDENTITY FROM THE JEWS?

+ We must all make a commitment to Jesus Christ and regular Church attendance.

+ We must all speak out against the Jewish war on Christian concepts such as “freedom of speech in criticizing Jews” & “freedom of public expression of Christianity.”

+ We must all get down on our knees and implore the Lord Jesus Christ to make America a Christian nation once again with thousands of Christian leaders!

Only Then Can We Put The Fear Of God (And His Wrath)
Into The American Jews!