Madoff & The Return Of Shylock 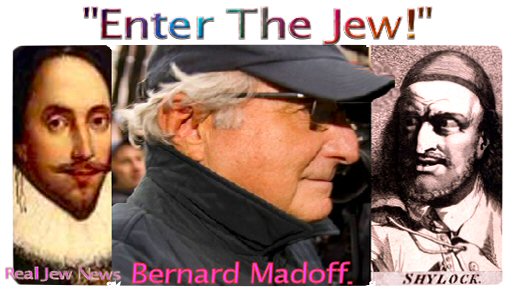 MADOFF & THE RETURN OF SHYLOCK
<By Brother Nathanael Kapner, Copyright 2008-2011

THE GREEDY JEWISH MONEY LENDER who has no conscience has reappeared some 400 years later since Shakespeare introduced the character of Shylock in his play, The Merchant Of Venice.

Act I, Scene III of Shakespeare’s masterpiece introduces the Jewish money lender, Shylock, with the stage announcement: “Enter the Jew!” (Shylock is known for demanding a “pound of flesh,” a “human heart,” from a Christian who cannot repay his loan.)

With today’s world as a virtual stage, over one billion ticket-holders have been treated to an instant replay of Act 3, Scene I of Shakespeare’s masterpiece. Thus we cut to - - “Enter The Jew!” - - and Bernard Madoff, a modern day Jewish money lender, appears. A veritable incarnation of Shakespeare’s Shylock, Madoff is currently known throughout the world as the “Wall Street fraudster.”

Bernard Madoff, the founder of Bernard L Madoff Investment Securities, is accused of running a $50 billion “Ponzi” fraud scheme. Madoff’s firm is now in liquidation due to an FBI investigation of his criminal activities. 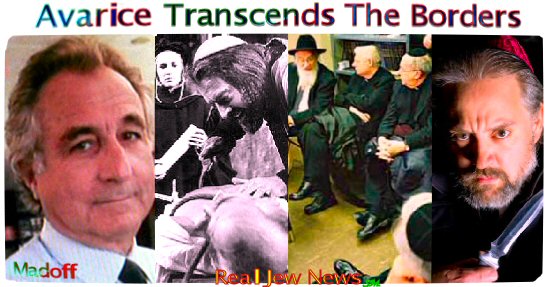 Bernard Madoff is also the former treasurer of the American Jewish Congress which lost a “significant” amount of money through their investments with Madoff. And a “significant” number of Jewish charities throughout world-wide Jewry have also been “stung” by their fellow Jew, Bernard Madoff.

Although the entire world is aware that Jews control finance, entertainment, the press and the media, now it is widely known that if a Jew’s greed becomes insatiable, he will stop at nothing to defraud even his own friends and fellow Jews. Why is this?

It is because the Jews have as their ultimate authority structure, the Talmud and its interpreters, the Jewish rabbis. The Talmud teaches that the Gentiles are sub-human and can be exploited for Jewish ends. But when this “exploitation” takes hold of an avaricious Jew like Madoff, then the border between Gentiles and Jews collapses.

A Jewish financier demanding a pound of flesh translating into billions of dollars when avarice is the motivating force, sees no distinction between Gentile and Jewish aortas…