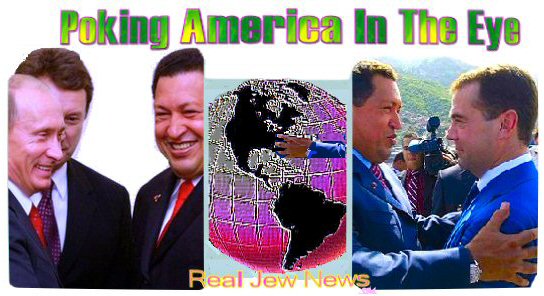 The patrol was escorted by two US F-15 interceptors above the Arctic Ocean of the Alaskan littoral.

Medvedev’s visit coincided with the arrival at the Venezuelan port of La Guaira of a group of Russian warships. The warships included Russia’s nuclear-powered battle cruiser, Peter the Great. Joint naval exercises are scheduled for December 1 2008 which will involve live-ammunition artillery drills & mock-warfare maneuverings.

An agreement in which Putin will build nuclear reactors in Venezuela was also inked. Trade agreements between Russia and the South American countries of Brazil, Peru, and Cuba, (including military cooperation), were also signed during Medvedev’s trip. During Medvedev’s visit to Cuba, Fidel Castro told Medvedev, “We need to build a multipolar world.”

Putin’s geopolitical agenda in the Americas is to tilt Latin American leaders, already critical of the US, away from Washington towards Moscow. Venezuelan President Chavez has long expressed a need to protect himself from a possible US invasion, following a coup in 2002 that briefly removed him from power. Chavez claims the coup was backed by George Bush.

Since then Chavez has repeatedly called Bush “the devil.” Many in Latin America, (as well as in the US), agree with Mr Chavez. View The Video Here. 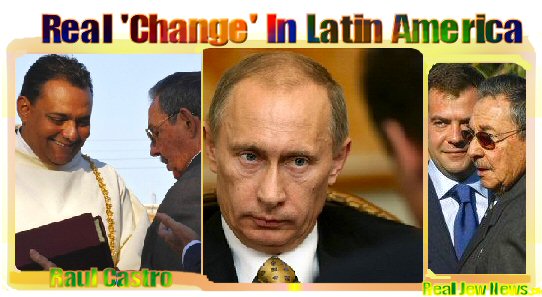 SOUTH OF THE BORDER OPPOSITION

AS AMERICA LOSES ITS INFLUENCE far beyond its own borders, Latin American nations are now reacting against America’s overbearing policies towards them. “Most countries of the region share Russia’s non-support for the idea of a unipolar world,” observes Vadim Teperman, Director of The Institute of Latin America in Moscow.

During his visit to Chavez on November 26 2008, another “poke in America’s eyes” was made by Medvedev in his opening speech:

America’s global hegemony is coming to an end. Historically, the Monroe Doctrine, which outlined America’s policy of protecting its surrounding borders from outside interference, was held sacred by former American leaders. But while American leaders are today seeking to police the world, Putin has invaded with impunity America’s own backyard…

And: Why Jews Fear Putin As Prime Minister Click Here